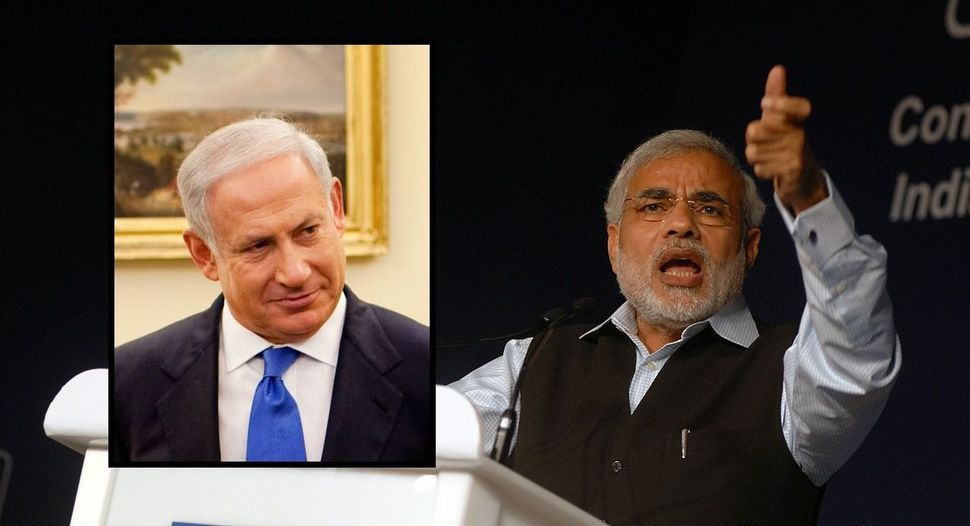 “We have the best of relations, and they can be made even better,” Netanyahu told Modi at the meeting.

To which Modi responded, “I am happy that often we can talk easily on telephone, we can discuss everything.”

A brief encounter between Netanyahu and European Union foreign policy envoy Federica Mogherini was far frostier. Mogherini approached Netanyahu in the hallway, and they shared little more than a handshake.

The contrast reflects an Israeli warming to the East, just as its relations with Europe have cooled amid disagreements over the peace process and Iran’s nuclear program. In recent years, trade between Israel and Asia has shot up, while Israel and Asian powers have made diplomatic overtures toward each other. And even as Israel’s strongest diplomatic ties remain with the West, there are signs of a pivot eastward.

Israel has long had amicable relations with Europe, ranging from defense cooperation to economics. Today, the European Union collectively is Israel’s biggest export destination, and Israel competes in European athletic and cultural competitions such as soccer tournaments and the Eurovision musical competition.

The ties are also historical. Israel was founded on the European model of a democratic nation-state. Many of Israel’s citizens are of European descent.

Recently, those ties have deteriorated. Israel almost withdrew from the EU’s Horizon 2020 program, which funds scientific research and innovation, due to a disagreement about funding projects in West Bank settlements. And it bristled at a French proposal this year to have the United Nations Security Council oversee Israeli-Palestinian negotiations.

European-Israeli relations are at a low point now over recently released EU guidelines to label goods produced in Israeli settlements. Israel has lambasted the guidelines as approaching a boycott. In response, Israel’s Foreign Ministry has cut off all coordination with EU institutions on issues related to the peace process.

“We regret that the EU has chosen, for political reasons, to take such an exceptional and discriminatory step, inspired by the boycott movement,” read a Foreign Ministry statement on the labeling guidelines. “This recent step raises questions regarding the role that the EU aspires to play.”

Meanwhile, Japan didn’t sell its cars in Israel until the 1990s in order to avoid a boycott in the Arab world. But last year, trade between Japan and Israel rose nearly 10 percent, to $1.75 billion. Israel also increased government grants for joint Israeli-Japanese research by 50 percent this year. Netanyahu also met with Japanese Premier Shinzo Abe in Paris this week.

Israel and China, which established formal relations only in 1992, are working on a free-trade agreement, and Netanyahu created an Israel-China task force within his office this year. Last year, Israel had a so-called “China Week,” when a variety of Chinese government officials and business leaders visited Israel.

India’s Modi has said he plans to visit as well. Meanwhile, Indian President Pranab Mukherjee traveled to Jerusalem in October, becoming the highest-ranking Indian official ever to come to Israel.

“We are very deeply part of the West in many, many ways, but we look to the East,” Netanyahu said at the state dinner during Mukherjee’s visit. “We appreciate Europe, but we admire Asia.”

In 2013, then-Economy Minister Naftali Bennett said during a visit to China that increased trade could open an avenue for “economic diplomacy” with the world’s most populous country. As opposed to Europe, Bennett said, Chinese companies don’t let the Israeli-Arab conflict get in the way of business.

“They never once asked us about the Arabs, or the Palestinians, or the occupation, or the shmoccupation, or anything else,” he said in a video statement. “The only thing that interests them is Israeli high-tech and Israeli innovation.”

India abstained from endorsing the U.N. report on last year’s war in Gaza, which accused Israel of possible war crimes. All European countries on the U.N. Human Rights Council, meanwhile, endorsed the report.

While the U.S. has a longstanding policy of vetoing anti-Israel resolutions at the U.N. Security Council, China typically votes against Israel. Given the size of China’s economy, analysts say a few more billion dollars in Israeli trade likely won’t mean a Chinese veto.

“Economic relations are driven by the business sector, not because the government wants to give priority,” said Oded Eran, the former director of Tel Aviv University’s Institute for National Security Studies. “We need to remember that China and India are very pragmatic, but they haven’t changed — and I doubt if they will change their vote in the U.N. because of improved economic relations.”