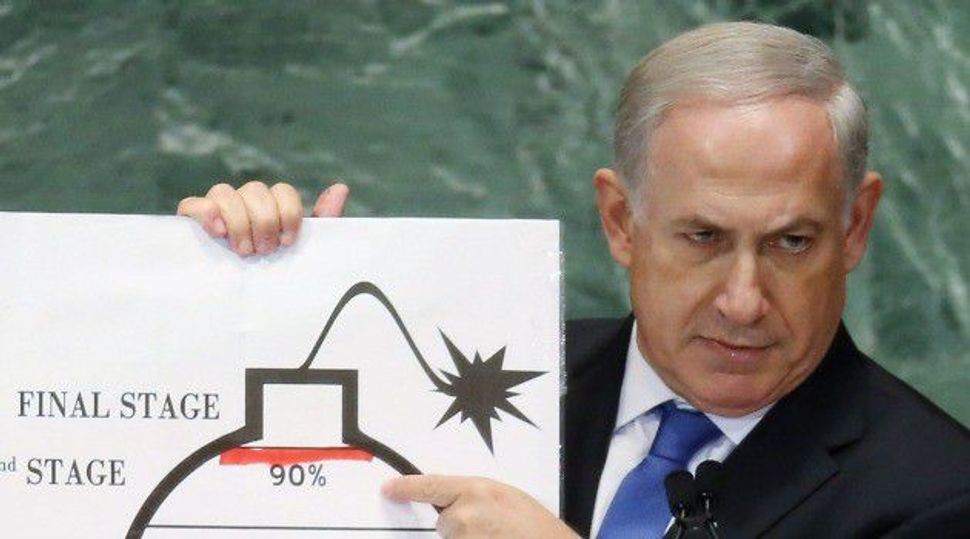 Bibi’s Warning. Benjamin Netanyahu grimly warned the world of the ‘existential’ threat posed by Iran’s nuclear program. The deal with Tehran largely addresses the concerns he raised at the United Nations Image by Getty Images

Leaders from a cross-section of Jewish organizations met Wednesday on Capitol Hill with 26 of the 46 senators who caucus with the Democrats.

The meeting was off the record, but participants told JTA that leaders of at least two organizations, the American Israel Public Affairs Committee and the Orthodox Union, expressed disappointment in the caucus for blocking bids over the summer to kill the Iran nuclear deal. Martin Nachimson, the O.U. president, chided the senators for not sufficiently engaging with Jewish constituents on the issue.

Most national Jewish organizations, including several that work closely with the Democratic caucus on a range of other issues, opposed the sanctions relief for nuclear restrictions deal reached over the summer between six major powers and Iran, agreeing with Israeli Prime Minister Benjamin Netanyahu that it left Iran perilously close to being a nuclear weapons threshold state.

The Obama administration backed the deal, and Senate Democrats used the filibuster to block a Republican effort to kill the deal.

At the meeting Wednesday, senators and Jewish organizational leaders agreed on the need for Congress to closely monitor the deal.

Nachimson also rebuked President Barack Obama for not speaking out after the murder last month of Ezra Schwartz, an 18-year old from Sharon, Mass., shot to death in a terrorist attack in the West Bank.

A number of senators at Wednesday’s meeting, most notably Sen. Barbara Mikulski, D-Md., who is retiring, forcefully defended the party’s record on Israel.

The senators were moved by presentations on the refugee crisis by Mark Hetfield, the president of HIAS, the lead Jewish agency handling immigration issues, and Greg Rosenbaum, the chairman of the National Jewish Democratic Council. The overwhelming majority of Jewish groups back Obama’s plan to settle 10,000 Syrian refugees in the United States over the next year, despite a swelling of GOP opposition to the program in recent weeks.

Jeremy Ben-Ami, the president of J Street, the liberal Jewish Middle East policy group, expressed concern about a recent spate of congressional language, in letters and legislation, which blurs the distinction between Israel and the West Bank.

A letter last month signed by Sen. Ben Cardin, D-Md., and Sen. Rob Portman, R-Ohio, urged the Obama administration to oppose any attempts to boycott settlement products as forcefully as it would oppose the boycott of any Israeli products. The letter refers to “pre- and post-1967 Israel,” although it is longstanding U.S. policy to recognize Israel as only within its pre-1967 borders.