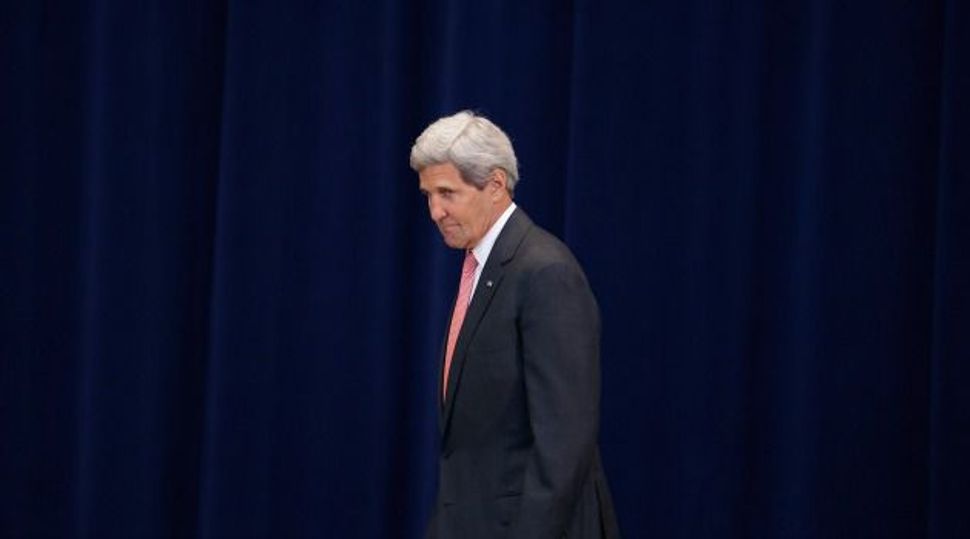 (JTA) — Secretary of State John Kerry, speaking at an annual U.S.-Israel confab, said Israel’s government must consider the consequences of evolving toward a single state incorporating the Palestinian areas.

“How does Israel possibly maintain its character as a Jewish democratic state?” Kerry said Saturday at the Saban Forum in Washington, D.C.

Would Palestinians “be relegated to a permanent underclass? Would they be segregated?” he asked.

Kerry told the forum, sponsored by Israeli American entertainment mogul Haim Saban and convened by the Brookings Institution to bring together U.S. and Israeli leaders, that he believed Netanyahu was committed to a two-state outcome, but it was clear that “many” ministers in his Cabinet were not.

“The level of mistrust” between Israelis and Palestinians “has never been more profound,” Kerry said.

Kerry’s bluntness matched Yaalon’s in his claim the previous evening that the Obama administration had forfeited leadership in the region to Russian President Vladimir Putin.

READ: In Putin’s policing of Middle East, some see a boon for Israel

Much of the Saban event is off the record, allowing for frank exchanges between top U.S. and Israeli officials. It is rare for such corrosive exchanges to make it into the portions open to the press, and streamed online. Hillary Rodham Clinton, the frontrunner in the race to become the Democratic nominee for president and Kerry’s predecessor as secretary of state, is due to speak on Sunday. Netanyahu, in a last minute announcement, was also set to give a ten-munute video address on Sunday.

The unfiltered bickering showed that last month’s friendly Netanyahu-Obama summit did not entirely patch up tensions and hurt feelings stoked by Kerry’s failed attempt in 2014 to broker an Israeli-Palestinian peace deal and by this year’s Iran nuclear deal, backed by Obama and opposed by Netanyahu.

Kerry, at Saban, asked how Israelis imagined the international community would react to a scenario in which Palestinians were permanently denied rights. He studiously avoided the term “apartheid”; his previous use of the term to describe the likely outcome of a collapse of the peace process drew sharp criticism from Jewish American groups.

Much of the recent spate of deadly violence in the West Bank and Israel has been stoked by tensions surrounding the Temple Mount.

Kerry chided leaders on both sides for sniping at one another.

“If all you’re doing is hurling invective at each other on a daily basis,” there is little prospect for peace, he said.

Kerry said Israel was effectively allowing Israeli expansion into Area C, the largest part of the West Bank where Israel maintains control and which the Palestinians say they need for a viable state.

“Settlements are absolutely no excuse for violence,” he said. “But continued settlement growth raises questions” about Israel’s intentions.

Kerry said that in Area C, Israel had granted only a single permit for Palestinian building over the previous year, while enshrining as legal many illegal Israeli settlement outposts in the area.

“You get that?” he said, appearing to challenge the Israelis present.

Yaalon, the previous evening, said Israel preferred a “slowly, slowly” approach to the Palestinians, preferring to focus on Israel’s security needs and unspecified progress on the political and economic tracks for the Palestinians.

Kerry also sharply pushed back against Yaalon’s claims that the United States had failed to show leadership in confronting the Islamic State terrorist group making gains in Iraq and Syria.

“We have led a coalition of 65 countries to fight, degrade and defeat Daesh,” Kerry said, using the Arabic acronym for Islamic State. “We are not naïve.” The “naïve” comment appeared to be a direct rebuke to Yaalon, who was present, and who in the past has used the term — not to mention “messianic” — to describe Kerry.

Yaalon had said that Russia was showing more resolve in the fight than the United States.

“Unfortunately, in the current situation, Russia is playing a more significant role than the United States,” eliciting some gasps at the stately Willard Hotel in downtown Washington.

Yaalon appeared especially concerned by the involvement of Iran in talks Kerry has convened in Vienna on confronting the Islamic State, depicting it as part of a process since the Iran nuclear agreement this summer of legitimating Iranian influence in the region.

“We worry about it as this process might bring about two bad options, as I mentioned: Daesh in one hand and Iran on our border,” Yaalon said, suggesting he had evidence that Iran was orchestrating attacks on the Israeli presence on the Golan Heights against the wishes of Bashar Assad, the Syrian president Iran and its proxies are nominally protecting.

“Unfortunately, as part of the deal, the Iranian deal, one of the implications of the Iranian deal is a more confident Iran perceived as a part of the solution in their readiness to fight Daesh and gaining hegemony everywhere, in Iraq and now in Syria,” he said. “The Vienna process, which I’m not sure will be successful, provides Iran the opportunity to gain power, to gain hegemony. Very dangerous.”

Kerry, speaking the next day, said that Iran and Russia, by joining the Vienna talks, had joined a process that would lead to a unified Syria removed of the leadership of Assad and the influence of outsiders.

“Russia and Iran are at the table for the first time … in which they agree there has to be a transition,” he said.

Yaalon, in the talk Friday evening, said Israel preferred a fractured Syria as an outcome, with separate enclaves for the Shiites, the Druze, the anti-Islamic State Sunnis and the Kurds.

“This is the only good option that might come out of this chaotic situation,” he said.

Kerry and Yaalon agreed on one thing: They each said, that whatever the political differences between the United States and Israel, the defense relationship remained “superb.”