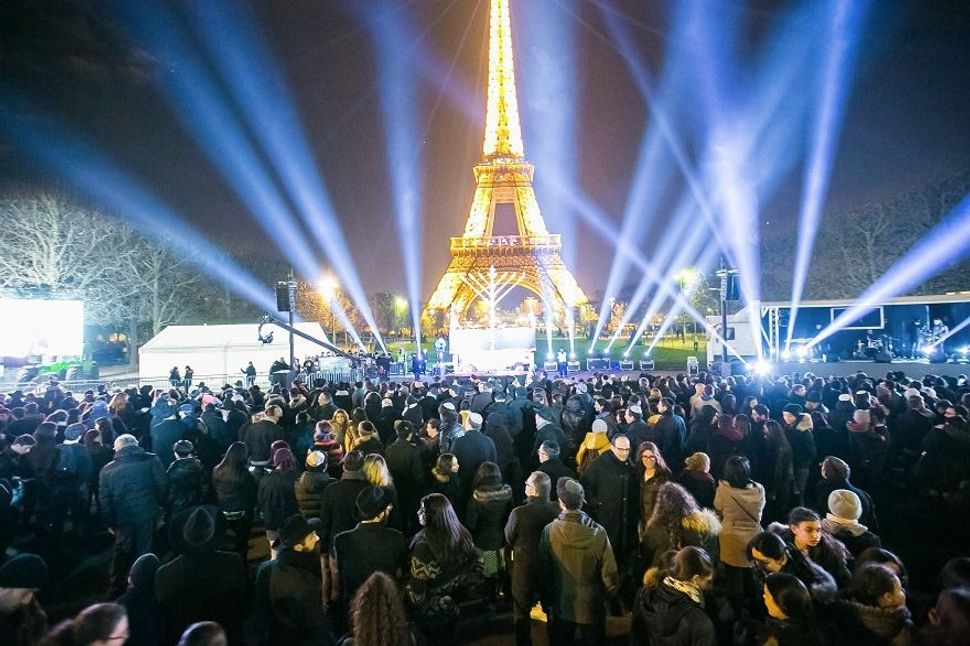 Some 6,000 people gathered in Paris under heavy security for the public lighting of a Hanukkah menorah at the base of the Eiffel Tower, despite security concerns in the wake of last month’s terrorist attacks.

French Chief Rabbi Haim Korsia lit the first candle of a 30-foot menorah on Sunday night, the first night of Hanukkah, in the Eiffel tower ceremony attended by French Jewish leaders and government representative and sponsored by Chabad-Lubavitch.

“This year, Hanukkah delivers a particularly relevant message,” Rabbi Chaim Schneur Nisenbaum of the Complexe Scolaire Beth Haya Moushka school system in Paris said. “In Paris, we very recently faced terrible attacks … intended to put an end to freedom of mind and opinions. In the historical times of Hanukkah, the invaders of the land of Israel, the Greeks, had the same intention. But the Jews did not submit.”

The Eiffel Tower event is one of more than 30 public menorah-lighting celebrations scheduled to take place across the city and in nearly 100 towns nearby. The public gatherings, which had to be approved in advance, are being held under heavy security, according to Chabad. org.

Rumors circulated last week that public menorah lightings would be canceled in light of the state of emergency in Paris initiated after the Nov. 13 coordinated attacks that left at least 130 dead.

Two of the menorah lighting venues of previous years, Republic Square and Bastille Square, both located near the Bataclan theater – the site of one of last month’s attacks – were not approved, Nisenbaum told Chabad.org.

Public Hanukkah celebrations in the French city of Marseille will be held indoors this year at the request of public security officials, according to Chabad.org. Marseille has been the location of several violent attacks against Jews in recent months and has a history of attacks on Jews.