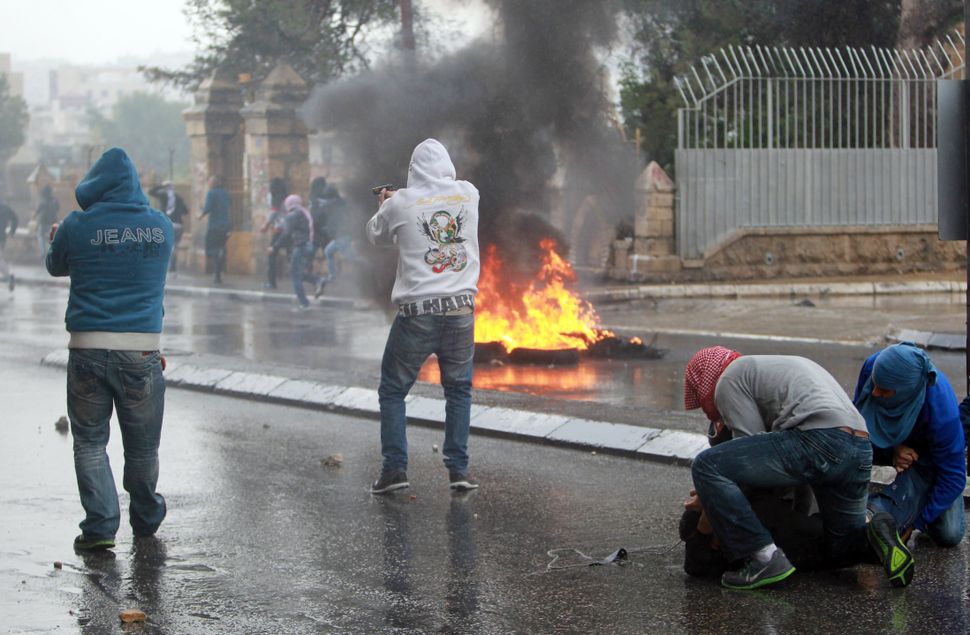 A classh in November in Bethlehem./ Image by Getty Images

Israeli troops shot dead a Palestinian protester while they were carrying out an arrest raid in the occupied West Bank town of Bethlehem on Tuesday, Palestinian medical sources said.

Residents of the Deheishe Refugee Camp said Malek Shahin, 19, was among a group of people protesting against the soldiers who had come to arrest two men. Both those men were apprehended, they said.

The Israeli military said violence erupted during “routine activity” when its troops encountered a barrage of “pipe bombs, Molotov cocktails and rolling burning tires and fired warning shots in the air to disperse the mob and prevent an escalation.”

In a second arrest raid on Tuesday, Israeli troops detained a Palestinian in the West Bank town of Ramallah in connection with a stabbing incident in October, the military said.

Violent incidents have become a daily occurrence in the West Bank, Israel and Jerusalem in the past two months, as an increasing number of Jews visit East Jerusalem’s al-Aqsa mosque compound – Islam’s third holiest site, which is also revered by Jews as the location of two destroyed biblical-era temples.

Since Oct. 1, Israeli forces have killed 105 Palestinians, 65 of whom Israel says were assailants or had been caught on camera carrying out assaults. Most of the others were killed in clashes with police or troops. One U.S. citizen and 19 Israelis have been killed in Palestinian attacks.

In the West Bank town of Hebron on Monday, paramilitary police fatally shot a Palestinian after he stabbed and critically injured an Israeli, police and hospital sources said.

Palestinians are also frustrated over a peacemaking process, deadlocked since early 2014, while Israel persists in adding to settlements in the dozens of enclaves it has built on land siezed in the 1967 Middle East war.

International condemnation of Israel’s actions in the occupied territory has also intensified and foreign powers have expressed concern over what they say is excessive use of force.

Relations between Sweden and Israel deteriorated further on Sunday after Israel said Sweden’s foreign minister had accused it of unlawful killings and Stockholm responded by saying that the comments had been “blown out of reasonable proportion.”