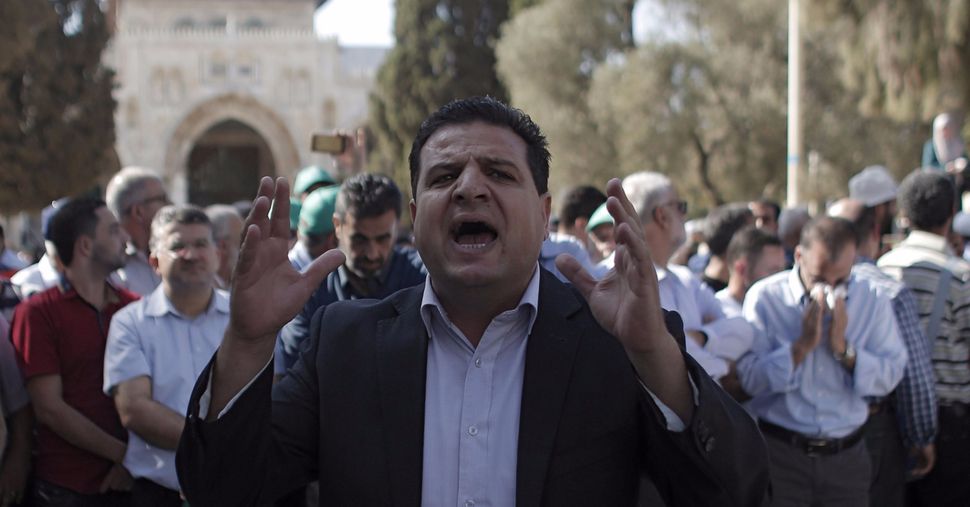 Arab-Israeli lawmaker and political leader Ayman Odeh refused to meet with the umbrella foreign policy body for American Jews because it shares office space with the Jewish Agency, an abrupt and dissonant end to a trip that was aimed at promoting greater Arab-Jewish cooperation.

“I came here to represent the Arab public in Israel to American audiences,” Odeh said in a statement Thursday after the Conference of Presidents of Major Jewish Organizations released a statement saying it was “disturbed and shocked” at Odeh’s refusal.

“As their representative, I cannot in good conscience participate in meetings in the offices of organizations whose work displaces Arab citizens, just as in the Knesset, we do not participate in the Ministry of Defense, the Foreign Ministry, and the Ministry of Aliyah and Immigrant Absorption,” Odeh said in his statement.

The controversy dealt a blow to Odeh’s message of outreach to U.S. Jews to join his effort to advance civil rights for Arabs and others in Israel.

“Representatives of a broad spectrum of organizations came to hear him and were rightly upset by his decision not to appear, although he was in the building lobby,” the Presidents Conference statement said.

A spokeswoman for Odeh said that the displacement of Arab citizens cited by Odeh referred to the Jewish Agency’s affiliation with a separate entity, the Jewish National Fund, which has long been challenged by Arab-Israeli groups for policies that have in the past favored Jews over Arabs in leasing land. Arab-Israeli groups allege that the policy blocks the growth of Arab towns.

The spokeswoman also said that Odeh sees aliyah, the immigration of Jews to Israel, as expanding the Jewish majority in Israel at the expense of its Arab population. The Jewish Agency is responsible, with the Ministry of Absorption, for settling newcomers in Israel. Another issue for Odeh is the funneling of money to West Bank settlements from another Jewish Agency affiliate, the World Zionist Organization, the spokeswoman said.

The Presidents Conference statement said Odeh’s decision, made in the lobby of the Manhattan building, deprived him of the chance to interact with U.S. Jewish groups.

“We received several suggestions that MK Ayman Odeh be invited and, in keeping with the Conference’s decades long tradition of providing a forum for a wide variety of points of view on issues affecting the American Jewish community’s agenda, we extended the invitation,” the umbrella group said.

“We have had leaders of virtually every faction and party in the United States, Israel, from friendly and unfriendly countries, and none ever refused to appear. For a member of the Knesset to assert that he will not enter a premises because it has an association with Zionist entities, like the Jewish Agency, is disturbing and dismaying.”

Odeh in his statement said he offered to meet elsewhere. An aide to Odeh said an office in the same building was made available, but that the Presidents Conference refused to move the meeting.

“The Conference will continue to provide an open forum but will not compromise our principles and yield to such an outrageous demand,” its statement said. “We hope MK Odeh will reconsider his stance if he, indeed, wants to advance coexistence in Israel and promote understanding abroad.”

On Tuesday, rabbis and lay leaders of the Reform movement in New York met with Odeh.

The meeting was hosted by Rabbi Rick Jacobs, the president of the Union for Reform Judaism, or URJ, and Rabbi Joshua Davidson, senior rabbi of Temple Emanu-El in New York City, the URJ said in a statement.

Odeh, 40, is the head of the Arab Joint List party, which won 13 seats in Israel’s national elections in March, making it the third largest faction in the Knesset. He successfully united four Arab parties to achieve that success.

In discussing his first year in the Knesset and his political goals for the future, Odeh told the Reform leaders that “more democracy and social justice in Israel is in our shared interest.”

“MK Odeh has an inspiring vision for a brighter future for Israelis and Palestinians,” Jacobs said. “We were delighted to host MK Odeh in one of our leading houses of worship, to share with him the beauty, history, and activism of our Reform Movement and to discuss together our shared commitment to a vision of Israel that draws from the prophets of justice and righteousness for all.”

The Reform leaders linked their meeting with Odeh to presidential candidate Donald Trump’s recent call for a ban on entry of Muslims to the United States.

“This is most appropriate at Hanukkah time, when we reflect on our commitment to tolerance in our increasingly intolerant world,” Jacobs said. “When we extended this invitation to Odeh, we would never have thought that his very presence in the United States would be controversial. However, we met the day after Donald Trump disgraced himself by calling for a ban on all Muslims entering the United States.”

During his weeklong visit to the United States, Odeh met with congressmen and senior Obama administration officials at the White House and State Department. He also met in Washington and in New York with Arab-American groups and leaders of progressive think tanks.

On Thursday, Odeh met with editors at the Forward at the paper’s lower Manhattan offices.