A baby was among 11 people injured in a car-ramming attack by a Palestinian driver at a Jerusalem bus stop.

The 18-month-old boy was seriously injured and placed on life support, and an elderly woman was moderately injured on Monday afternoon when the driver slammed his car into people waiting at the stop near the Chords Bridge, at the western entrance to the city. Nine others were lightly injured.

The driver was shot and killed by a local security guard, according to reports.

The car also struck a fire hydrant, causing water to flood the area. An axe was found in the car, according to police.

A campaign of stabbings, shootings and car-rammings by Palestinians has killed 19 Israelis and a U.S. citizen since the start of October. Israeli forces have killed at least 110 Palestinians, most of whom the army described as assailants. 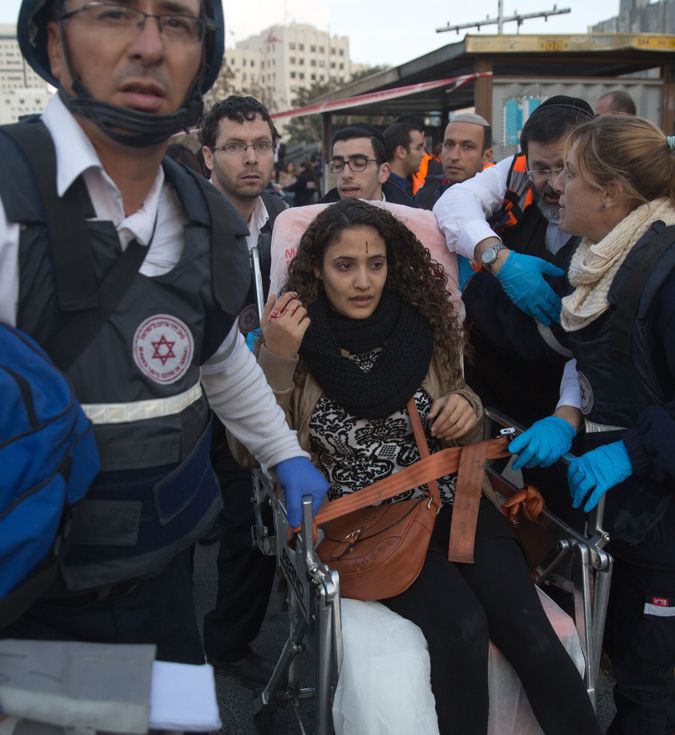 This latest attack took place near the western entrance to Jerusalem, leading to the main highway to Tel Aviv, and the injured included two people in a moderate condition and a baby, medics said.

The attacker was identified as 21-year-old Abdel Muhsan Hasuna of East Jerusalem, a police spokeswoman said. An axe was found in the attacker’s vehicle, police said.

An Israel Radio reporter said she had seen the car mount the pavement and strike people before shots rang out. 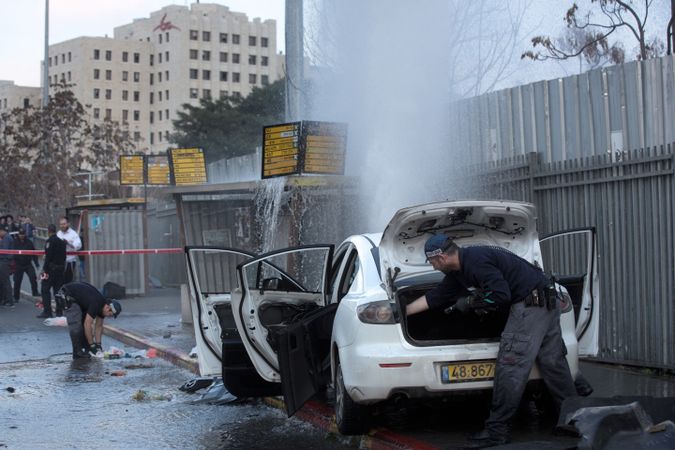 “I was about to turn left to Tel Aviv, suddenly a car went up onto a bus station, shots immediately opened up … There are people in the station… A number of people simply lifted up the car, because there were people underneath it,” Miri Krimolovsky told her station.

Israeli Prime Minister Benjamin Netanyahu, describing the wave of attacks as “a new type of terror by individuals which challenges us and other countries,” praised the quick response of people at the scene whose actions “prevented far more serious tragedies.”

“We are acting constantly to fight this terror and I have no doubt that eventually we will overcome it,” Netanyahu told his Likud party’s legislators in parliament moments after the attack.

Palestinians are frustrated at Israel’s 48-year occupation of the West Bank and the failure of long-running peace efforts with Israel.

The bloodshed has also been fueled by Muslim opposition to stepped-up Israeli access to Jerusalem’s al Aqsa mosque complex, which many Jews revere as a vestige of their biblical temples.

A poll published by the Palestinian Center for Policy and Survey Research indicated that 67 percent of respondents supported stabbing attacks against Israelis and that, if the attacks were increased, it “would serve Palestinian national interests in ways that negotiations could not.”