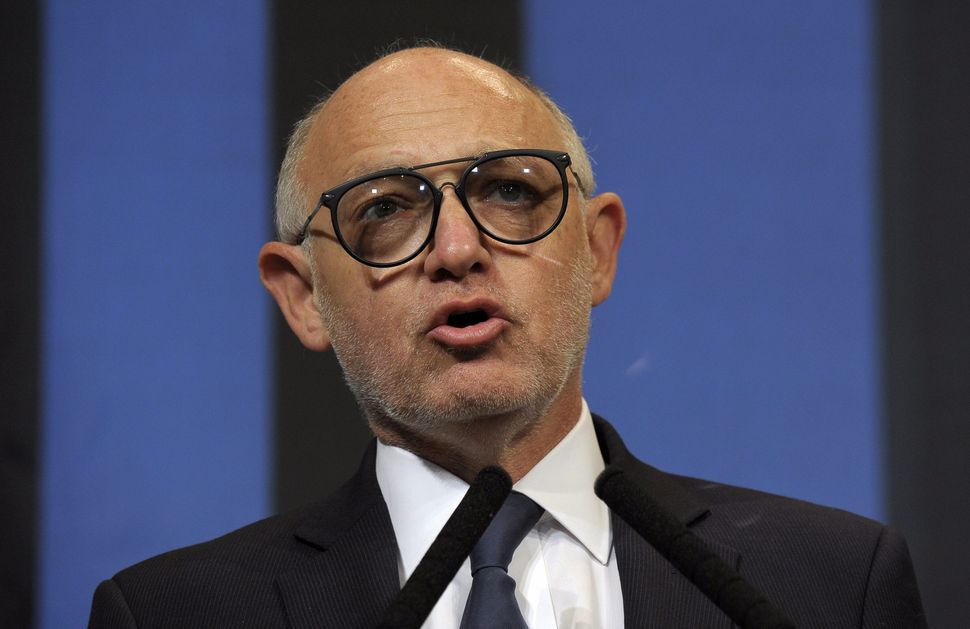 Former Argentine Foreign Minister Héctor Timerman said that Iran was responsible for the 1994 bombing of the AMIA Jewish center in Buenos Aires while he was negotiating with Tehran.

The admission was captured on secretly-recorded telephone conversations which were released on Friday by the Argentinean radio station Mitre.

In the leaked recordings of conversations with leaders of the Argentine Jewish community, Timerman, who is Jewish, defends the efforts made by the government of Cristina Fernandez de Kirchner saying that the only goal is to solve the AMIA case. Timmerman justifies the negotiations with Iran to jointly investigate the attack saying: “Eighteen years ago they planted the bomb.”

The conversations took place in 2012, when AMIA criticized the negotiations with Iran. In the first recording, Timerman is speaking with Guillermo Borger, the then-president of the AMIA Jewish community organization.

Timerman: We are the only government that advances in the case. (…) I think it is a good opportunity for Argentina, and we didn’t talk one word about politics, commerce or other issue, just we talk about AMIA. We didn’t talk in the meetings about any other issue just AMA. But now it seems that AMIA wants that the cause to not advance…

Borger: No, this is not true.

Timerman: …seems that you are happy with accusing Iran, you just want that Iran is accused.

Timerman: I’m calling you because it hurts. It hurts me as a Jew to hear the critics from AMIA. And it seems that the best choice is to do nothing, and if we (the government) do nothing, the AMIA will be happy. But I’m doing this for AMIA.

In the first part of the recording, Timerman also said that the AMIA prosecutor Alberto Nisman told him that he is in favor of the negotiations. Despite that private call between Timerman and Nisman, after the signing of the Memorandum of Understanding, Nisman challenged the agreement, asking a federal judge to declare it unconstitutional.

Borger: We don’t regard Iran as valid [as a negotiating partner].

Timerman: And who do you want me to negotiate with, Switzerland?

Borger: I will just say that Iran lies, is not credible and denies the Holocaust.

Borger: I hope you can negotiate with another…

Timerman: If there was someone else, they [the Iranians] wouldn’t have planted the bomb. So we are back to the beginning. Do you have someone else for me to negotiate with?

Scaliter: We don’t tell you with whom you must negotiate.

Timerman: No, you tell me with who cannot negotiate.

Timerman: Ah, are you smart.

Borger: The Prosecutor [Alberto Nisman, found dead on January 18] working on this case, who wasn’t appointed by us, carried out a serious and important investigation and says Iran did it.

Borger: … so I will trust him if they will present to the justice.

Timerman: So how do you want me to bring them [the Iranian fugitives to Argentina]? You never know what should be done.

The recording was released by Radio Mitre on a program called “La noticia deseada,” or “the desired news,” on Friday when guest journalist Daniel Santoro provided the recordings that he used in his book “Nisman debe Morir,” or Nisman should die.

In the conversations, the former foreign minister says that the critics from AMIA hurt him as a Jew. In 2015, Timerman resigned his AMIA membership, expressing his “indeclinable resignation” due to the “obstructionist actions” that the institution had made against a deal with Iran to investigate the attack.

Though Argentina has accused the Iranian government of directing the bombing, and the Lebanon-based terror group Hezbollah of carrying it out, no arrests have been made in the case. Six Iranians have been on the Interpol international police agency’s most wanted list since 2007 in connection with the bombing.