Republican presidential candidate Donald Trump claimed he wasn’t being vulgar when he used the Yiddish term “schlonged” to describe Hillary Clinton’s loss to Barack Obama for the 2008 Democratic presidential nomination.

“‘Schlonged’ is not vulgar. When I said Hillary got “schlonged” that meant beaten badly,” Trump tweeted Tuesday night.

Once again, #MSM is dishonest. “Schlonged” is not vulgar. When I said Hillary got “schlonged” that meant beaten badly.

Trump’s off-color comments about the Democratic front-runner at a campaign appearance on Monday night came a day after he called Clinton a liar for saying his proposal to ban entry of all foreign Muslims to the United States aided Islamic State’s propaganda efforts.

“Schlong” is a Yiddish slang term for a man’s genitals.

Trump, who is leading the Republican field for the 2016 presidential nomination, also made a reference to Clinton returning to the stage late after a bathroom break during a Democratic debate on Saturday night. 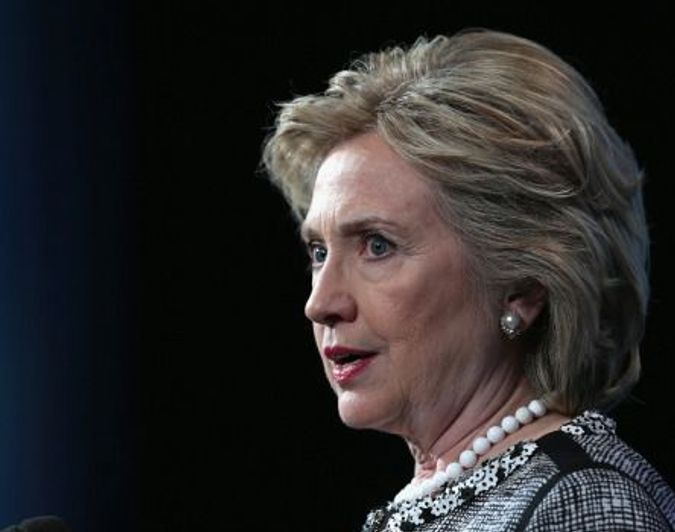 “I thought she gave up,” Trump said. “Where did she go? Where did Hillary go? They had to start the debate without her. Phase II. I know where she went. It’s disgusting. I don’t want to talk about it,” Trump said.

Jennifer Palmieri, Clinton’s communications director, tweeted on Tuesday that the campaign would not respond to the comments, but was scathing about the language Trump used.

“We are not responding to Trump but everyone who understands the humiliation this degrading language inflicts on all women should,” Palmieri said.

News reports after the debate said the women’s bathroom was farther from the stage than the men’s room.

A Reuters/Ipsos poll released on Monday found that Trump would lose to Clinton in a hypothetical head-to-head contest if the presidential election were held today. The two are heading their respective fields to be the Republican and Democratic nominees for the election in November next year.

Trump’s blunt and sometime outrageous style and comments about Hispanics, women, Muslims and his rivals for the nomination have set much of the tone for the Republican race.

His appearance on Monday night was interrupted by hecklers who were ejected from the event. The real estate tycoon suggested the protesters might be “drugged out” and chided another group for being “so weak” they would not resist security guards’ directions to leave.

His comments about Clinton were not the first time he has veered into vulgarity. After a televised debate in August, he posted Twitter messages criticizing Fox News moderator Megyn Kelly and made comments in a television interview that were widely interpreted as referring to her menstrual cycle. He denied that was his intention.

Trump, 69, said last month that Clinton, 68, did not have strength or stamina to be president, and also has called her the worst U.S. secretary of state during her time in the post from 2009-2013.

He has frequently mocked his rivals for the Republican nomination for their lower standing in the polls, often focusing on Jeb Bush, who he describes as “low energy.” He was quoted in Rolling Stone magazine in September talking about the appearance of Carly Fiorina by saying, “Look at that face. Would anyone vote for that?”—Reuters