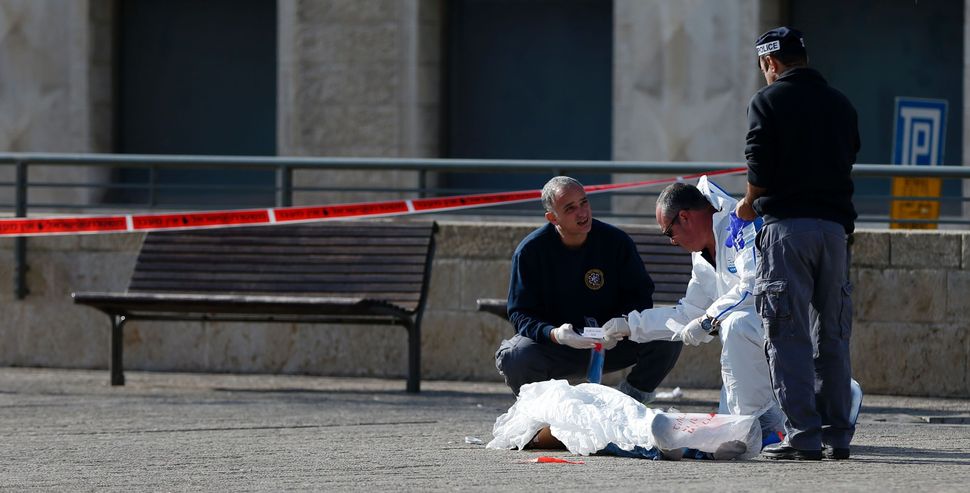 JERUSALEM – Israeli security forces said they shot dead two Palestinian assailants on Saturday in separate incidents in Jerusalem and the occupied West Bank, as 12 weeks of heightened violence showed no sign of abating.

Since the start of October, Israeli forces or armed civilians have killed at least 128 Palestinians, 79 of whom authorities described as assailants. Most others have been killed in clashes with security forces.

Almost daily Palestinian stabbing, car-rammings and shooting attacks have killed 20 Israelis and a U.S. citizen, raising fears of a wider escalation a decade after the last Palestinian uprising subsided.

In the latest fatal incident, the Israeli military said a Palestinian rammed his car into Israeli soldiers at a West Bank checkpoint. “Forces responded to the imminent danger and fired towards the perpetrator,” the military said, adding that one soldier had been wounded and evacuated to hospital.

The 56-year-old Palestinian man died after being taken to hospital, the Palestinian Health Ministry said.

The Palestinians disputed the Israeli military’s account of the incident. Jamil Dawoud, 49, said he was traveling in the car behind the one of the man shot, at the checkpoint where soldiers were inspecting the vehicles and that the soldier who opened fire appeared to misunderstand what had happened.

“There were three soldiers. One soldier signaled for the man to come forward, a soldier was on the edge of the road and he tried to move backward when he slipped. The second soldier opened fire, firing four bullets at the man, after that they tried to give him first aid,” Dawoud said.

Officers approached a man they said was following Jewish worshippers, spokeswoman Luba Samri said, and asked to see his identification papers. “The terrorist whipped out a knife and tried to stab a police officer. He was swiftly shot and neutralized,” Samri said. 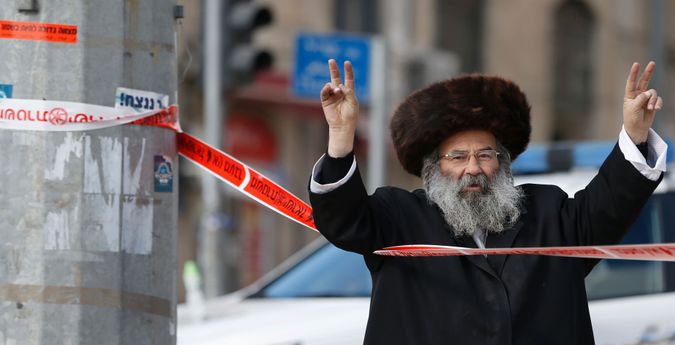 An ultra-Orthodox Jewish man gestures the v-sign for victory from behind police tape at the site of a reported attack by a Palestinian assailant on December 26, 2015, near Jerusalem's Old City. 'Police officers spotted a man who aroused their suspicions and approached him to check,' a police spokeswoman said. 'The terrorist pulled out a knife and tried to stab the policeman and was quickly killed by police gunfire. Image by Getty Images

The incident was captured on security camera footage.

The surge in violence has been fueled by Palestinians’ frustration over Israel’s 48-year occupation of land they seek for an independent state and the expansion of settlements in those territories which were captured by Israel in the 1967 Middle East war.

Palestinian leaders say a young generation sees no hope for the future living under Israeli security restrictions and with a stifled economy. The latest round of U.S.-brokered peace talks collapsed in April 2014.

Violence has also been triggered by Muslim anger over stepped-up Israeli visits to Jerusalem’s al Aqsa mosque complex. The site, Islam’s holiest outside Saudi Arabia, is also revered by many Jews as a vestige of their biblical temples.

Israeli leaders says Islamist groups who call for the destruction of Israel have played a major role in inciting the recent violence.