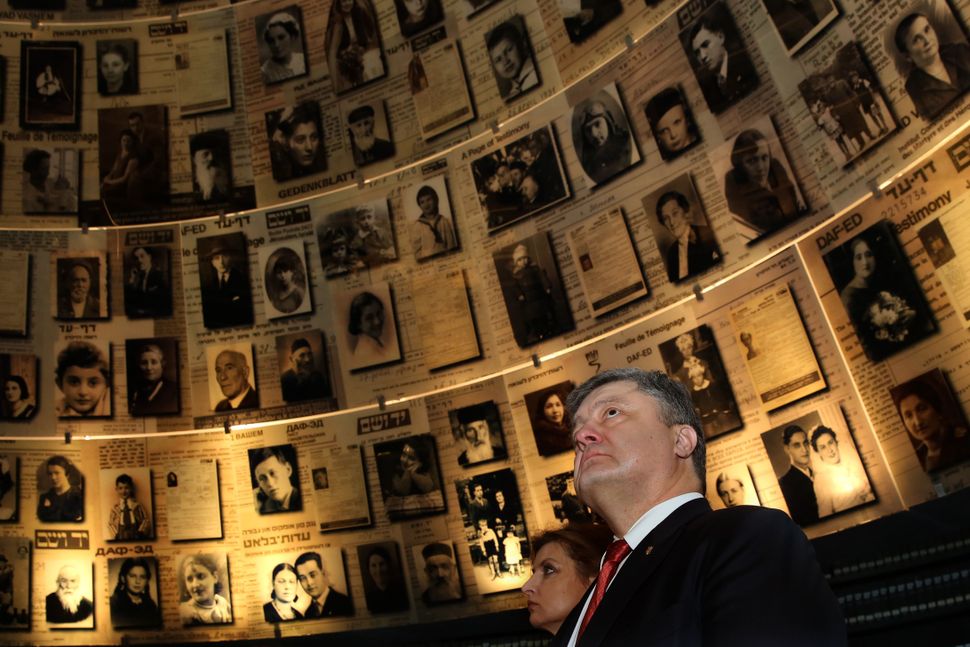 A senior Russian rabbi accused the president of Ukraine of glossing over his country’s Holocaust record and lying about Russia’s treatment of Jews.

The criticism by Gorin, chairman of the Jewish Museum and Tolerance Center in Moscow, focused on Poroshenko’s allegation that Jews in Crimea are barred from entering synagogues and his claim that they are in danger from the “cultivation of anti-Semitism” there, as Poroshenko said during a speech at the Knesset.

Russia annexed Crimea from Ukraine last year, citing the need to protect minorities, including Jews, from Ukrainians following the overthrow of a government that was seen as pro-Russian.

Calling Poroshenko’s claims fabrications, Gorin said Poroshenko was “using the Jewish card and slandering and lying,” as Poroshenko has accused Russian President Vladimir Putin. Gorin criticized Israeli politicians for not addressing these issues during the visit, which was Poroshenko’s first as president.

During a talk with labor lawmakers in Israel, Poroshenko dismissed concerns that post-revolutionary sentiment is stoking anti-Semitism amid the glorification of local collaborators with the Nazis against Russia during World War II.

“In Ukraine, Jews have nothing to fear. But in the Crimea they are oppressed and not allowed in synagogue,” Poroshenko said during that talk, according to Ksenia Svetlova, a Labor lawmaker and former journalist who attended the meet. Synagogue services are held regularly in Crimea, where many Jews welcomed the Russian annexation.

Gorin said Ukraine under Poroshenko was glorifying figures responsible for atrocities against Jews during the Holocaust, including the former militia leader Stepan Bandera. Several streets are named after Bandera in Ukraine.

Separately, on Friday the RIA Novosti news agency reported that a video surfaced online showing a Ukrainian right-wing lawmaker, Artem Vitko, singing a song praising Adolf Hitler that included the lyrics “We are all Hitler.”

“I support Ukrainian sovereignty and find foreign interference in Ukraine’s internal affairs totally and absolutely criminal,” Gorin wrote. But neither Russia nor Putin “are making Ukrainians swear allegiance to the memory of a hateful abomination,” he added.