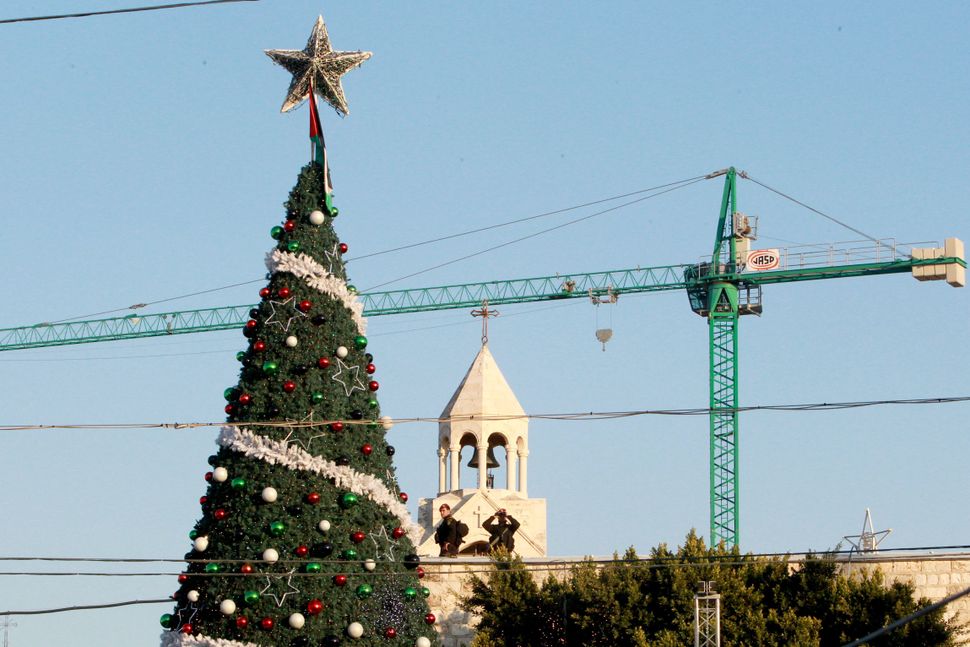 Christians gather around the Church of the Nativity in Bethlehem on December 24. Image by Getty Images

Jesus was not Palestinian, a major church denomination in Australia said after the Executive Council of Australian Jewry challenged an article in a political publication in which the birthplace of Jesus Christ was named as Palestine.

The article was written by two Palestinian members of Australia Palestine Advocacy Network which has links with the Uniting Church of Australia and appeared in the online publication New Matilda.

The Australia Palestine Advocacy Network has a relationship with the Uniting Church of Australia, the country’s third largest Christian denomination, through the Palestine Israel Ecumenical Network.

In the article, Samah Sabawi and Bassam Dally wrote: “An official delegation representing our country in Israel has added fuel to the flames of extremism abroad by applauding proven human rights violators and insulting the living descendants of Christ in his home of birth in Palestine.”

In his letter to the president of the Uniting Church of Australia Stuart McMillan, the executive director of the ECAJ, Peter Wertheim, wrote: “The proposition that Jesus was a Palestinian and that the Palestinian Arab population of today are his “living descendants” is so absurd and offensive that it deserves an immediate and substantive rebuttal. “

Wertheim referred to continuing attempts to “to erase the Jewishness of Jesus and the common origins of Christianity and Judaism, and to pretend that the Holy Land has no Jewish national or religious history.”

Responding, McMillan wrote: “I would like to assure you and the Jewish community that the Uniting Church does not accept the view that Jesus was Palestinian. We affirm that Jesus and most of his early followers were Jewish. We note that Jesus was born neither in Israel nor in Palestine, but in the Roman-occupied province of Judea, and that it is entirely inappropriate for anybody to attempt to claim political capital from the birth of Jesus in Bethlehem to bolster claims of either ‘side’ of the Israeli-Palestinian dispute.”

Wertheim told JTA that he would meet next month with Mc Millan to further discuss the issue.