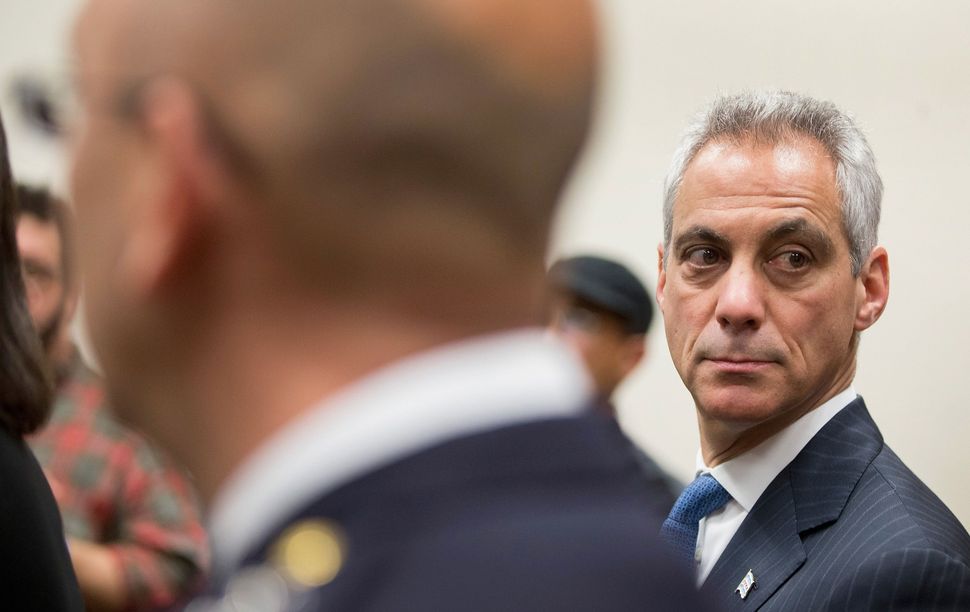 Chicago Mayor Rahm Emanuel is returning to his troubled city from his Cuban vacation paradise to deal with the growing cop crisis.

His spokeswoman announced he is returning from the sun and fun as pressure mounted on Chicago’s first Jewish mayor to resign after police shot and killed two black citizens over the weekend — including a mom of five.

“While Mayor Emanuel has been in constant contact with his staff and Interim Superintendent (John) Escalante, he is cutting his family trip short so that he can continue the ongoing work of restoring accountability and trust in the Chicago Police Department,” said Kelley Quinn.

Emanuel is set to arrive back in Chicago on Tuesday afternoon, she said.

The new killings of African-Americans puts further scrutiny on the nation’s third-largest police force, which is already under federal investigation over its use of deadly force.

One victim’s family is expected to seek video footage of the shootings, which occurred early on Saturday, in an attempt to get a clearer picture of what happened, according to its attorney.

Both families have said Emanuel has failed them.

The release of a Chicago police video last month of the fatal shooting of a black teenager, which had been withheld for more than a year, led to the resignation of the city’s police chief and the start of a U.S. Department of Justice probe into whether the city’s police use lethal force too often, especially against minorities.

High-profile killings of black men by police officers since mid-2014 have triggered waves of protest, including in Chicago, and fueled a civil rights movement under the name Black Lives Matter.

The latest police shootings killed Bettie Jones, 55, and college student Quintonio LeGrier, 19. Family members said police were called after LeGrier, who had mental health issues, threatened his father with a metal baseball bat. Jones, who lived in a first-floor apartment of the building, was shot through the door, said her cousin Evelyn Glover.

The embattled mayor issued a statement on Sunday calling for a review of the police Crisis Intervention Team and better guidance for officers when dealing with mental health cases.

“There are serious questions about yesterday’s shootings that must be answered in full by the Independent Police Review Authority’s investigation,” his statement said.

The mayor’s office did not reply to requests for further comment or his plans on Monday. He has no events scheduled in Chicago over the next few days.

The previous killing of 17-year-old black teen Laquan McDonald in October 2014, which was captured on the video released last month, has led to multiple protests and calls for Emanuel’s resignation.

Civil rights activist Al Sharpton said Emanuel should step down in an interview on MSNBC’s ‘Morning Joe’ program on Monday, adding that he wondered why Emanuel had stayed in Cuba.

“I’ve never seen this kind of detachment in the years that I’ve been fighting, whether I got along with the mayor or not,” he said.

Supporters of the victims’ families made their own protest against the mayor on Sunday, some wearing t-shirts reading ‘Rahm Failed Us,’ and several speakers at a media conference demanding to know why police used lethal force.

Regarding Saturday’s shooting, police said LeGrier was being combative. They said Jones was killed by accident and extended condolences. Chicago police spokesman Anthony Guglielmi said on Monday he did not know if there was video of the shooting.

However, attorney Larry Rogers Jr., representing Jones’ family, said at a prayer vigil on Sunday that there may be a video from a house under construction across the street, along with possible police footage.