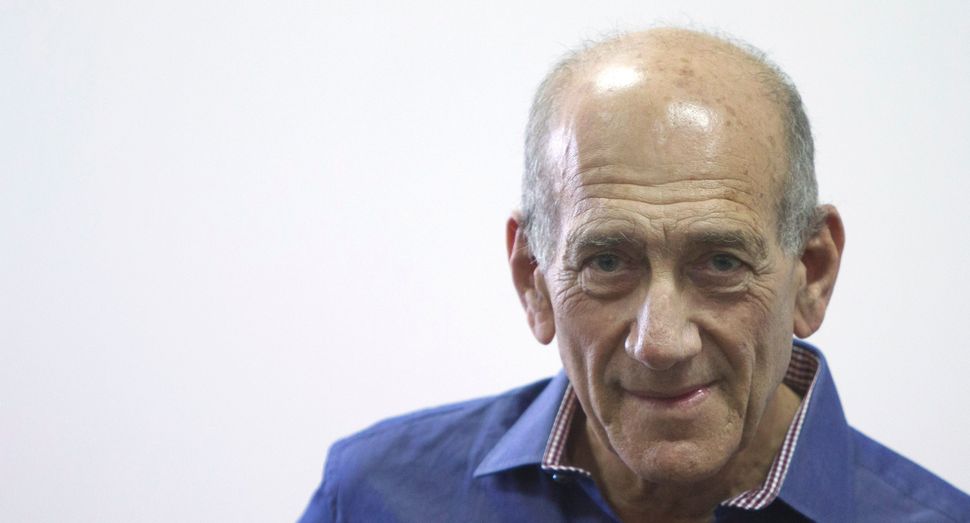 Olmert, 70, will begin serving his term on Feb. 15, according to live reports from the Jerusalem courtroom, making him the first former head of government in Israel to go to prison.

The charges related to his 1992-2003 term as Jerusalem’s mayor and real estate deals in the city.

The conviction ended speculation that Olmert – a centrist credited with working towards a peace settlement with the Palestinians until the graft scandal forced him to step down – might return to political life.

The Kadima party he formerly headed is no longer in parliament.

Olmert, prime minister from 2006 to 2009, has denied any wrongdoing in a major property deal that led to the construction of the hilltop Holyland apartment towers, a hulking stone complex widely seen as one of Jerusalem’s worst eyesores.

“No bribe was ever offered to me and I never accepted one,” said Olmert, who wore an open-neck blue shirt and looked visibly relieved. “But I respect the verdict of the Supreme Court justices.”

Tel Aviv District Court found Olmert guilty in March 2014 of two bribery charges, finding that he accepted 500,000 shekels from developers of the Holyland project and 60,000 shekels in a separate real estate deal.

The six-year sentence handed down by the lower court had been put on hold until the culmination of the appeal.

Issuing its ruling, a five-member Supreme Court panel said it had not been proven beyond reasonable doubt that Olmert had solicited the 500,000 shekels from a real estate developer, to help the veteran politician’s brother get out of debt. It upheld his conviction on accepting the smaller amount.

A lawyer by profession, Olmert began his political career in the 1970s as a lawmaker who targeted organized crime in Israel. As the country’s leader, Olmert waged war against militants in Lebanon in 2006 and the Gaza Strip in 2008.

He claimed significant progress in talks with the Palestinians aimed at security a final peace deal, offering an Israeli withdrawal from much of the occupied West Bank. But no agreement was reached.

Olmert is expected to serve his term, separated off from most other prisoners, in the same jail holding former Israeli President Moshe Katzav. Katzav was convicted of rape charges in 2010 and sentenced to seven years. — Reuters