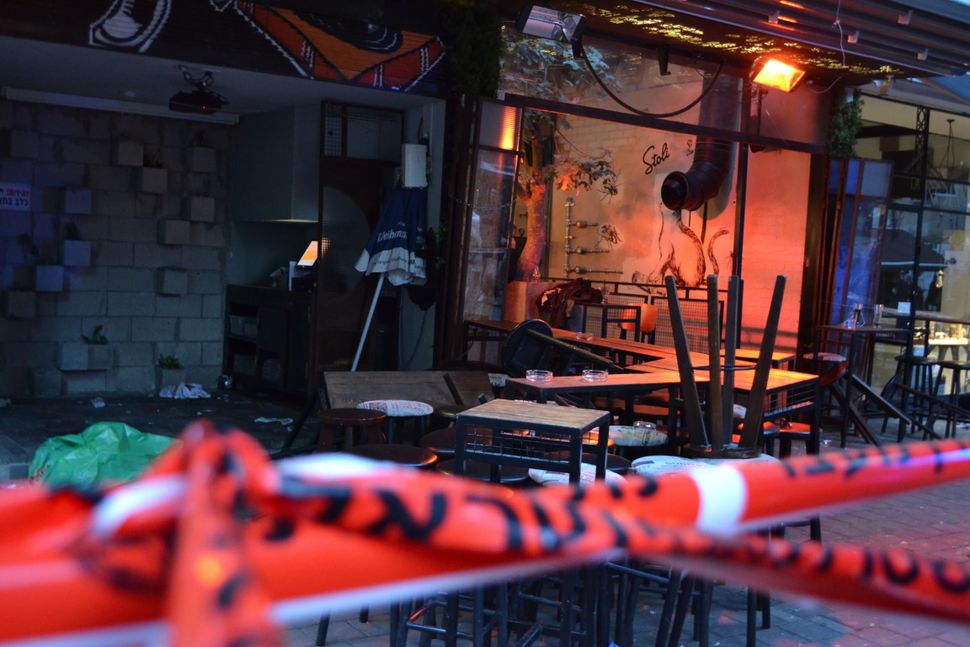 Police in Israel were hunting on Saturday for an Israeli Arab identified as the suspect in Friday’s deadly shooting attack on a Tel Aviv bar, a case they described as “complex and unique.”

Nashat Melhem, 29, from the village of Arara in northern Israel was still at large and Prime Minister Benjamin Netanyahu, who visited the scene of the attack in which two people were killed, said security forces were searching for “a needle in a haystack.”

Netanyahu said the city center shooting was a “despicable crime of unfathomable cruelty” and called for maximum vigilance from the public. He said security agencies had bolstered forces in “relevant areas” but gave no further details.

The father of the suspect denounced the attack and called for him to turn himself in or face capture by police.

“What is important to me now is that they reach my son and arrest him, because he is still armed,” the Ynet news website quoted him as saying. “And just as he murdered two people, he can murder more.”

The suspected gunman, a 29-year-old from northern Israel, was still on the run Saturday, and authorities suspect he is still in the Tel Aviv area.

“I am worried and I want to hear that he is in police hands,” the father told Ynet.

The manhunt began in the Tel Aviv area but details of the investigation were under a court gag order. Police spokesman Micky Rosenfeld said roadblocks had also been set up further afield to prevent the suspect escaping to the West Bank.

Security camera footage released moments after the attack showed the assailant browsing dried fruit at a health food store next door to the bar. He then pulled a machine pistol from his backpack and stepped onto the pavement, shooting wildly.

Israelis Alon Bakal, 26, and Shimon Ruimi, 29, were killed at the Simta Bar on Dizengoff Street, a main Tel Aviv thoroughfare, several others were wounded, two seriously, in the attack which took place in the early afternoon.

Sami Melhem, a relative of the suspect and a lawyer, told Israeli Channel 2 that Nashat Melhem, whom he had represented previously in a case in which he was jailed for assaulting an Israeli soldier, was mentally unstable.

Arabs, the majority of them Muslim, make up 20 percent of Israel’s population of 8.4 million. While they broadly sympathize with the Palestinians, they rarely take up arms against the country or its Jewish majority.

“This is an extreme, complex and unique event in which an armed individual embarked on an indiscriminate killing spree in the heart of a busy street,” police spokeswoman Luba Samri said in a statement, alluding to the fact that the case may differ from recent attacks by Palestinian militants against Israelis.

Israel has seen a wave of Palestinian street attacks since October, fueled in part by Muslim anger over stepped-up Jewish visits to Jerusalem’s al-Aqsa mosque complex, also sacred to Jews, as well as the lack of any progress in peace talks.

The violence has been encouraged by Islamist groups that preach Israel’s destruction.

Israel has also been bracing for a possible attack by Islamic State, which has a small but growing following among Israeli Arabs. An Islamic State audio message circulated on social media last week threatened to strike at Israel “soon.”

Relatives say the gunman is mentally ill and they don’t know why he carried out the shooting.

Authorities believe it was a terror attack although they have not ruled out some other motive.—Reuters