Fallen Israeli Soldiers Can Be Buried Without Religious Rites 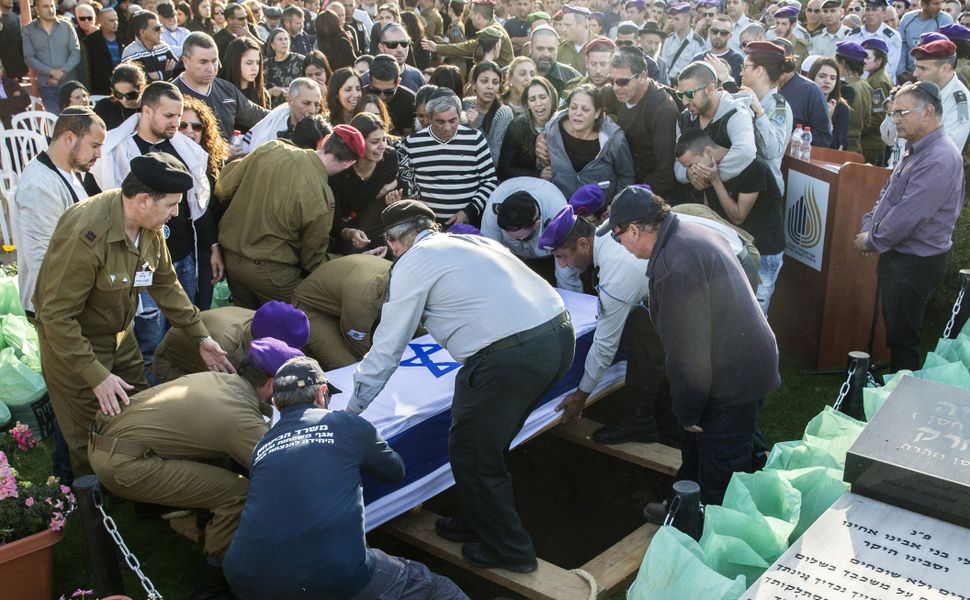 Israeli soldiers killed in the line of duty may now be buried in a military cemetery without a religious ceremony.

Last week’s ruling by the legal adviser to the Defense Department came in response to a request this summer by the religious pluralism organization Hiddush, which called on the defense minister and chief of staff to provide an “alternative civilian” burial plot in Israeli military cemeteries for nonreligious or pluralistic services.

Rabbi Uri Regev, the head of Hiddush, praised the move in a statement on the organization’s website, which announced the ruling.

“This undoubtedly will be a breakthrough that will allow families to bury their loved ones in accordance with their faith and lifestyles,” he said.

According to Regev, similar instructions were issued to the IDF in 1998 by the then-chief of staff, Shaul Mofaz, but were never put into practice. Regev was optimistic that it would be different this time.

It is a Jewish custom to bury Jews separate from non-Jews. Many soldiers, such as those from the former Soviet Union, are not halachically Jewish.

Prior to last week’s ruling, the families of fallen soldiers who wanted a nonreligious burial had to have their request approved by the Israel Defense Forces’ rabbinate, according to The Jerusalem Post. Also, the burial could only take place in a civilian cemetery without military honors.

Ahaz Ben-Ari, the Defense Ministry’s legal adviser, told Hiddush in a letter that his department had “instructed the IDF manpower directorate to explicitly anchor in IDF regulations the right of a fallen soldier to be buried in a military cemetery without a religious ceremony.”

Fallen Israeli Soldiers Can Be Buried Without Religious Rites