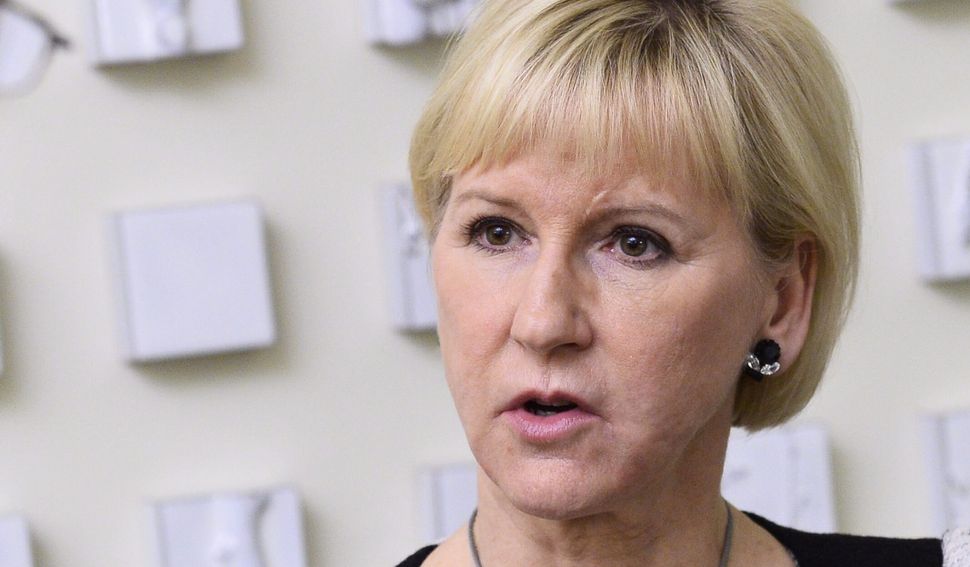 Israel summoned the Swedish ambassador on Wednesday to convey what it described as its “rage” at a call by Stockholm’s top diplomat for an investigation to determine whether Israeli forces were guilty of extrajudicial killings of Palestinians.

Swedish Foreign Minister Margot Wallstrom’s remarks on Tuesday were the latest in a series of statements to stoke Israeli resentment that has simmered since the Scandinavian country recognized Palestinian statehood last year.

The Foreign Ministry in Jerusalem said in a statement that it called in Swedish Ambassador Carl Magnus Nesser to reprimand him over what it deemed “another statement by her (Wallstrom) that attests to her biased and even hostile attitude to Israel.”

It said Nesser was also told of “the rage of the government and people of Israel at the skewed portrayal of the situation.”

Rights groups have accused Israel of using excessive force to quell a surge of Palestinian street attacks that has been fueled in part by Muslim agitation at stepped-up Jewish visits to a contested Jerusalem shrine, as well as a long impasse in talks on founding a Palestinian state on Israeli-occupied land.

The bloodshed has raised fears of wider confrontation, a decade after the last Palestinian uprising subsided.

The United States, the European Union and the United Nations have all expressed concern, saying that while they recognize Israel’s right to self-defense, restraint is necessary to ensure the violence does not escalate further.

Since Oct. 1, Palestinian stabbings, car-rammings and gun attacks have killed 24 Israelis and a U.S. citizen. Israeli forces or armed civilians have killed at least 143 Palestinians, 91 of whom authorities have described as assailants. Most others were killed in clashes with security forces.

“It is vital that there is a thorough, credible investigation into these deaths in order to clarify and bring about possible accountability,” Swedish media quoted Wallstrom as saying during a parliamentary debate on Tuesday.

She earlier described the Palestinians’ plight as a factor leading to Islamist radicalisation – comments seen in Israel as linking it to the November gun and bomb rampage in Paris.

Hotovely called for a halt to official Swedish visits to Israel – a measure that political sources said was overruled by Prime Minister Benjamin Netanyahu, who is also foreign minister.

A Foreign Ministry spokesman, asked to clarify Israel’s position, said Wallstrom “would not be especially welcomed here. Were she to visit, she would not be received by Israeli officials.”

Responding to Israel’s summoning of the envoy, Wallstrom’s spokesman noted an EU call in October for an investigation into Israeli tactics and said: “We want to have good relations with Israel and have an active dialog, including about values.” — Reuters