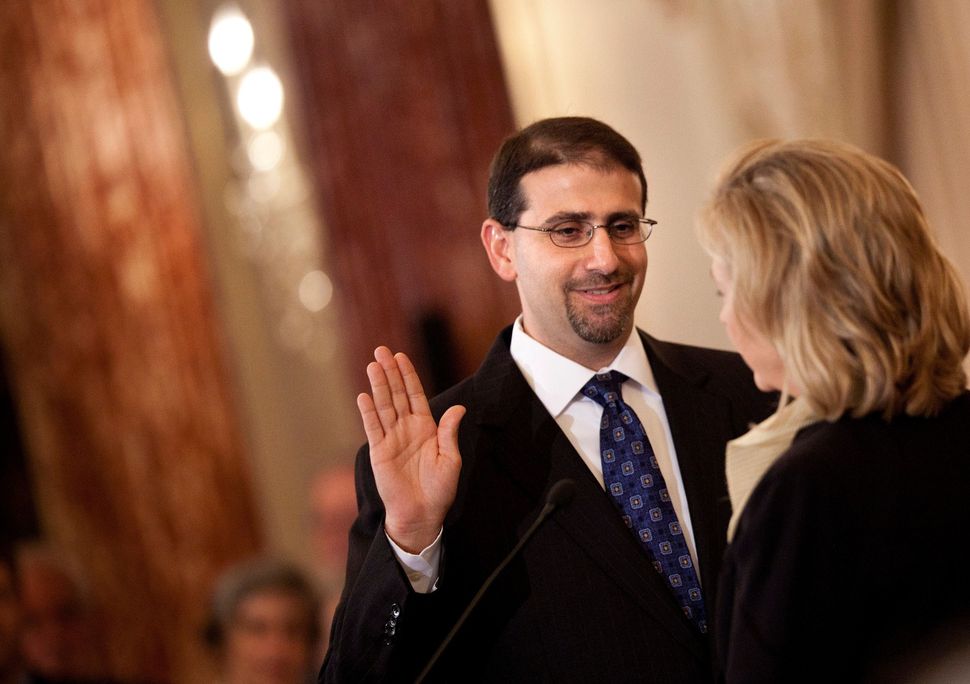 U.S. and European criticism of Israeli actions in the occupied West Bank have drawn a furious response from Israel this week, including a former official dismissing the U.S. ambassador to Tel Aviv as a “little Jew boy.”

Although the concerns expressed by Israel’s closest allies were partly cloaked in diplomatic language they struck a nerve in Israel, which is anxious to counter what it sees as growing attempts to isolate it over its policies towards Palestinians.

Ambassador Dan Shapiro’s supposed misstep was to observe in a speech to a security conference that Israel applies the law differently to Israelis and Palestinians living in the West Bank. “There seem to be two standards,” he said.

It is a point diplomats and human rights groups frequently make, identifying the fact that Palestinians are subject to Israeli military law as part of Israel’s 49-year occupation, while Israeli settlers are subject to civil law.

Prime Minister Benjamin Netanyahu immediately jumped into the fray, calling Shapiro’s comments “unacceptable and wrong.” He met with Shapiro, who is Jewish and is usually regarded by Israeli officials as a “close friend,” to discuss it.

There was no such attempt to paper over differences from Aviv Bushinsky, a former adviser to Netanyahu and a frequent commentator on Israeli TV. After viewing a clip of Shapiro’s comments during a debate on Channel 2, Bushinsky said:

“To put it bluntly, it was a statement typical of a little Jew boy,” he said, using the derogatory Yiddish term “yehudoni” to describe the ambassador, who is in his mid-40s.

The criticism heaped on Shapiro was not dissimilar to that aimed at Swedish Foreign Minister Margot Wallstrom, who last week called for an independent investigation into Israel’s efforts to quell a surge in violence, saying that in some cases Palestinian assailants were being killed “extrajudicially.”

Netanyahu’s energy minister called Wallstrom “anti-Semitic, whether consciously or not,” and the prime minister did not back away from that characterisation, saying of Wallstrom’s suggestion: “it’s outrageous, it’s immoral and it’s stupid.”

Appearing before the foreign media last week, Netanyahu was asked for his response to those who say Israel increasingly acts as if it is above criticism and cannot be reined in.

“Israel’s not above criticism,” he said, “but it should be held to the same standard that everyone else is being held to.

“I mean, people are defending themselves against assailants wielding knives who are about to stab them to death, and they shoot the people, and that’s extrajudicial killings?”

At the event, Netanyahu played up Israel’s strong ties with India, China, Japan and Russia, countries that rarely criticize. On the other hand, he acknowledged relations with the European Union, Israel’s biggest trading partner, needed a “reset.”

The EU has been straightforward in opposing Israeli settlement growth in the West Bank and East Jerusalem, a policy seen as illegal by most of the world.

To draw clearer lines between Israel proper and the land it has occupied since the 1967 Middle East war, the EU has called on member states to put labels on imports from the settlements and is considering other ways of “differentiating” between Israel and land the Palestinians seek for their own state.

That has enraged Israel, which says it is being boycotted. But in a sign that the EU’s position is gaining support, the U.S. State Department gave it verbal backing on Tuesday.

“We view Israeli settlement activity as illegitimate and counterproductive to the cause of peace,” spokesman John Kirby told reporters. “We do not view labeling the origin of products as being from the settlements a boycott of Israel.”

With less than a year of Barack Obama’s presidency to run, and almost no prospect of a return to Israeli-Palestinian peace talks, some analysts think the U.S. administration could step up its criticism of Israel over the coming months.

When it comes to settlements, there is widespread frustration. In a report on Tuesday, Human Rights Watch called on businesses to stop operating in, financing and trading with Israeli settlements, calling it an ethical obligation.