The Jerusalem home of a secular Jewish educator was vandalized by suspected Jewish extremists.

The graffiti discovered Thursday morning at the home of Yaakov Malkin included a reference to the Book of Psalms about hating “those who are in rebellion” against God, a Star of David and the words “Destruction of Amalek,” referring to the biblical nation that attacked the Israelites fleeing from Egypt. A knife and a threatening letter also were found in front of the house.

Police are investigating the incident; no suspects have been arrested. 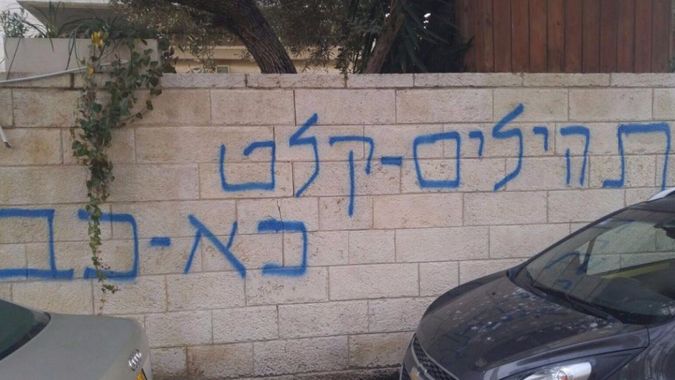 Malkin is the academic director of Tmura, the International Institute for Humanistic Secular Judaism, which trains secular rabbis and community leaders for secular communities.

Psalms 139: 21-24 is referenced on the wall around his home. It reads: “Do I not hate those who hate you, Lord, and abhor those who are in rebellion against you? I have nothing but hatred for them; I count them my enemies. Search me, God, and know my heart; test me and know my anxious thoughts. See if there is any offensive way in me, and lead me in the way everlasting.” The Jews were commanded to wipe out the nation of Amalek.

Malkin, 89, told Haaretz in an interview that he is a second-generation atheist.