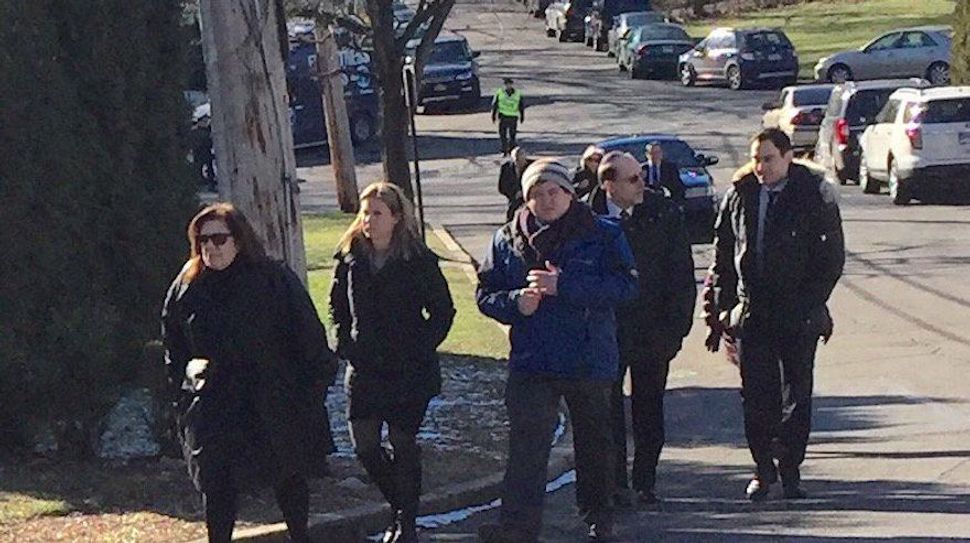 Hundreds of people attended the funeral of a Jewish pediatrician who police say was fatally stabbed by her husband in their suburban New York home.

Robin Goldman’s funeral Thursday was held at Young Israel of Scarsdale, an Orthodox Jewish congregation in Westchester County where she and her husband, Jules Reich, were longtime members.

Goldman, 58, was stabbed in the shower on Wednesday in the first murder to take place in Scarsdale, an upscale town, in almost four decades.

At the funeral, Goldman’s son and two daughters spoke, sharing memories of their mother’s attentiveness both to their needs and to her four grandchildren, the New York Times reported.

Goldman’s youngest grandchild, a boy, was born in December.

“Family, community and religion were the pillars you instilled in us,” her daughter Alyssa said, “and that you lived by every day.”

Reich was in jail, where he is being held without bail, and, according to several media outlets, no mention was made of him during the funeral service.

A lawyer and accountant, Reich has been charged with second-degree murder. Police said he called 911 Wednesday morning to report that Goldman had been injured. When they arrived, they found her lying in the shower with multiple stabbing wounds. She died at the scene, and police took Reich into custody.

Reich and Goldman were in the process of divorcing; they were scheduled to appear in court later this month.

Goldman saw patients at Montefiore Medical Group’s Comprehensive Family Care Center and was an assistant professor at the Albert Einstein College of Medicine. Both Montefiore and Einstein are located in the Bronx.

At the funeral service, according to The Times, Goldman’s son Adam spoke of her “personal mission to rescue Jewish things,” noting that she combed through tag sales looking for Judaica.

“I think she saved my grandmother’s last batch of meatballs for 15 years — something like that — in the freezer,” Adam Reich said. “They were only thrown out because of a power outage.”

According to Lohud.com, Goldman was an avid tennis player and president of the parents group at SAR Academy, an Orthodox day school her children attended. She studied the Torah portion each week and co-authored a cookbook at Young Israel of Scarsdale. She enjoyed traveling and visited Israel on several occasions.

“Robin was the archetype of a woman of valor,” Rabbi Jonathan Morgenstern said, according to Lohud.

The couple’s synagogue, Young Israel of Scarsdale, is no stranger to tragedy. In 2008, its rabbi and his wife, Jacob and Deborah Rubenstein, died in their home in an overnight fire on the Sabbath that was ignited by a lightning strike while they were sleeping.

A statement from the synagogue’s rabbi and co-presidents on the synagogue’s website says in part, “As a community, we are grief stricken and our hearts are filled with pain to know that Robin, who was so good, so sweet and so pious has so suddenly been taken from us.”

The family is sitting shiva at the Upper West Side apartment of a relative.