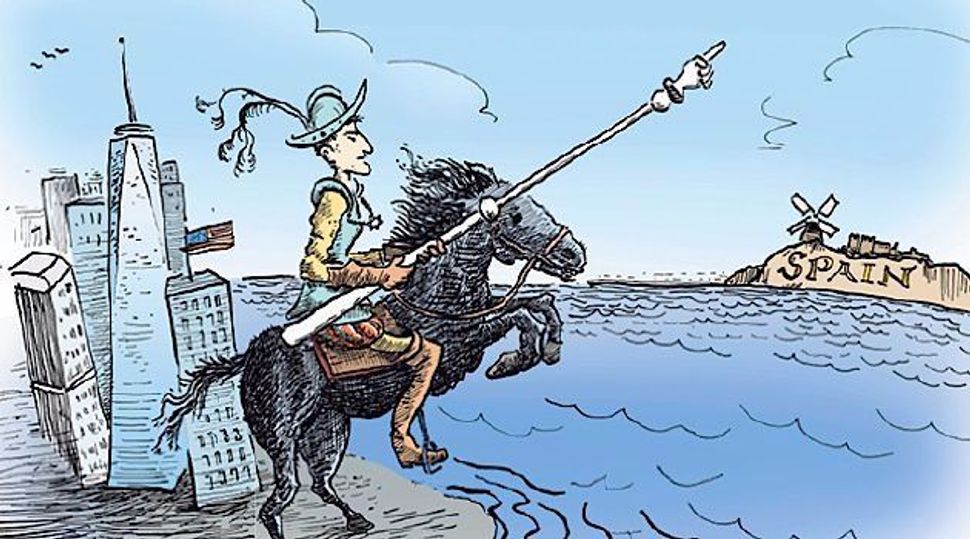 Who is the author of Don Quixote, which Spanish chemist won the Noble Prize, what is Spain’s tallest mountain, and who is Penelope Cruz? These are but a few of the questions posed to Israelis trying to attain a Spanish passport as part of a new law that grants descendants of Jews forced out the during the Spanish Inquisition the right to take up dual citizenship.

The test was successfully passed this week by a 40-year-old resident of Haifa, a descendent of those expelled in the 15th century, who is set to become the first Israel to receive a Spanish passport as part of the new law, which came into effect at the end of last year.

The man, Yossi Ben Naim, is the first Israel to complete the application process, filed with the help of the La Unión Sefaradí Mundial, an NGO based in Jerusalem. The process required Ben Naim to trace ancestry back to the 1492 expulsion, a personal connection to contemporary Spanish culture, and passing a language and general knowledge test. This week, Ben Naim left for Spain where he completed the final stage of the process, filing his documents with a Spanish notary with his documents. Now he awaits an invitation from the Spanish embassy in Tel Aviv to receive the highly coveted passport.

Speaking with Haaretz, Ben Naim told of his family, saying both of his parents were born in the northern Morocco town of Tétouan. His father, Moshe, was born in 1925 and moved to Israel in 1972; his mother, Rahel, born in 1941, came to Israel in 1956. “They spoke Spanish at home, and so did I,” he recalled. A few months ago, after first hearing that the Spanish government will allow Israeli decedents of those expelled to apply for citizenship, Ben Naim decided he too would apply. At first, he searched for family documents indicating their heritage: “I found ID cards and passports from Spain and Morocco, belonging to my grandmother and father,” he said.

The La Unión Sefaradí Mundial helped Ben Naim to create a detailed report of his genealogy, based on preexisting research into Spanish Jewry, and discovered he is related to Morocco’s head rabbi from the end of the 19th century. The report also included details of the names of the Jews from Tétouan, and details of his father’s birth.

Marranos: Secret Seder in Spain during the times of inquisition, an 1892 painting by Moshe Maimon.Wikipedia Finally, in October, Ben Naim went to the Instituto Cervantes in Tel Aviv and began the testing process. “It wasn’t simple,” he said, “I took a few courses there because the test included grammar, writing an essay and a verbal examination,” he said.

He then faced an additional general knowledge quiz on Spanish government, history and culture: “They asked me about the structure of government, how the legislative houses work and what is the form of governance in Spain,” Ben Naim said. “There were also questions about Spanish history and culture, like who wrote Don Quixote, who is Spain’s most famous actors and what is the name of the highest mountain in Spain. “The legacy of Spanish Morocco is part of me. I feel very connected to Spain and its culture,” he said, adding that his parents “were very very excited” when they heard that their son would be the first Israeli to receive a Spanish passport. “They felt very honored,” he said, “most of my family never made Aliyah [immigrated] to Israel – most moved to Spain and Venezuela.”

Yossi Ben Harush, head of the La Unión Sefaradí Mundial who assisted Ben Naim in his application process, told Haaretz that the group “has received hundreds of requests, but this is the first to materialize into a passport. We have a large number of additional applications in the works,” he said.

The group is not the only one working to assist Israelis in the quest for Spanish citizenship. A number of organizations and private lawyers are also working in the new market. Speaking to Haaretz, one such lawyer, Maya Weiss-Tamir, said that the first group of such clients is now about to begin the process.