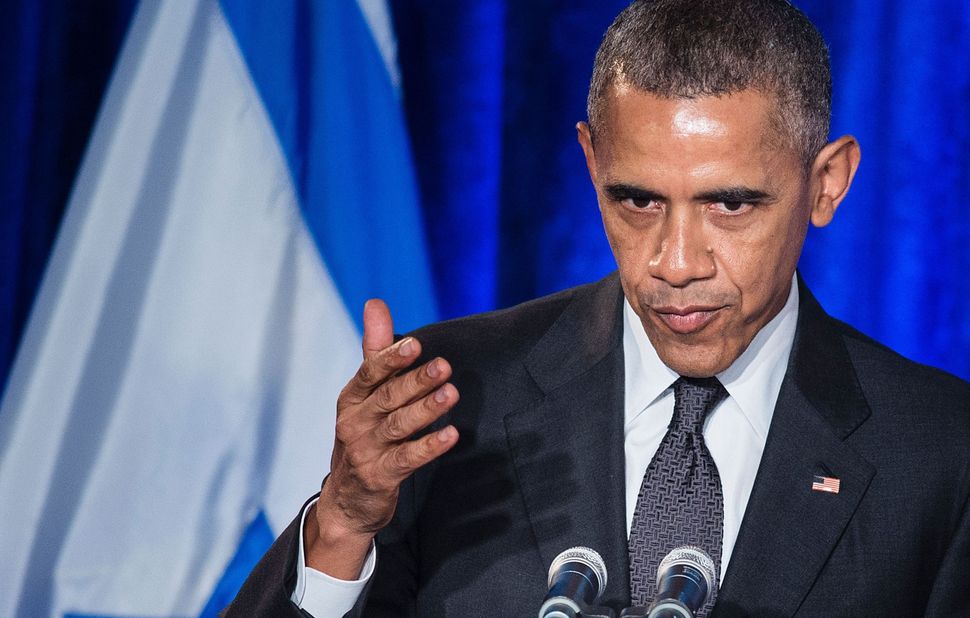 WASHINGTON — Anti-Semitism is on the rise worldwide, and the United States must lead the fight against it, President Barack Obama said in remarks at the Israeli embassy.

“Here, tonight, we must confront the reality that around the world, anti-Semitism is on the rise,” Obama said Wednesday at a ceremony marking International Holocaust Remembrance Day.

“We cannot deny it,” he said. “When we see some Jews leaving major European cities — where their families have lived for generations — because they no longer feel safe; when Jewish centers are targeted from Mumbai to Overland Park, Kansas; when swastikas appear on college campuses — when we see all that and more, we must not be silent.”

Obama said that he has made fighting global anti-Semitism a priority, and cited Hungary as a case where the United States made it clear that the failure to address anti-Jewish bias would impede strong bilateral relations.

“It’s why, when a statue of an anti-Semitic leader from World War II was planned in Hungary, we led the charge to convince their government to reverse course,” he said. “This was not a side note to our relations with Hungary, this was central to maintaining a good relationship with the United States, and we let them know.”

The president cast anti-Semitism as a manifestation of intolerance that afflict other minorities, and praised Israeli President Reuven Rivlin for combating anti-Arab bias in Israel – notably, because Rivlin has chided Israeli Prime Minister Benjamin Netanyahu for not doing enough in that arena.

He appeared at one point to allude to the candidacy of real estate magnate Donald Trump, leading in the polls among Republicans, and who has called for sweeping actions against undocumented migrants and against Muslims.

“It means taking a stand against bigotry in all its forms, and rejecting our darkest impulses and guarding against tribalism as the only value in our communities and in our politics,” he said.

Obama’s appearance was unprecedented; no president has ever given a speech at the embassy, something Israeli Ambassador Ron Dermer noted in his remarks. Both governments have endeavored in recent months to overcome bad blood created by last years’ Iran nuclear deal, which Israel opposed, and the failure of the Obama administration’s efforts to revive the Israeli-Palestinian peace process.

Netanyahu delivered brief remarks via a video recording, thanking Obama for speaking at the embassy, and for advancing talks on extending and expanding U.S. defense assistance to Israel.

The event, co-hosted by Yad Vashem, Israel’s Holocaust memorial, included the formal recognition of four people as righteous among the nations for the rescue of Jews during the Holocaust.

They were Roddie Edmonds, a U.S. army sergeant who while being held captive in a German prisoner of war camp, refused orders from a German commander to identify Jewish POWs under his command; Lois Gunden, an American teacher in France who made the children’s home she ran a safe haven for Jewish children, and Walery and Maryla Zbijewski, a Polish couple who cared for a Jewish girl who had managed to flee with her mother from the Warsaw Ghetto.

Families of the rescuers and survivors they saved, and their descendants, attended. Obama in his speech picked up particularly on Edmonds declaration to the German commander, who was furious with Edmonds for not identifying the Jewish soldiers in his ranks: “We are all Jews,” Edmonds said.

Obama, alluding to Edmonds’ devout faith, said: “I cannot imagine a greater expression of Christianity than to say, I, too, am a Jew.”