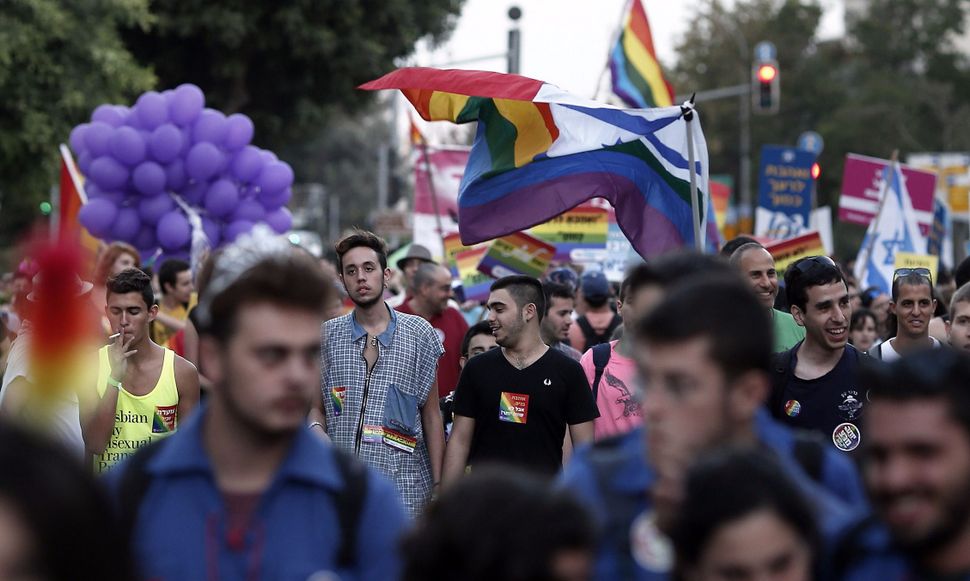 Days after 200 anti-Israel demonstrators forcibly shut down a reception at the National LGBTQ Task Force’s Creating Change conference, a group of American LGBT activists, both Jewish and non-Jewish, condemned the protesters’ behavior as “unacceptable and not in accord with the Task Force’s values of pluralism, inclusivity and thoughtful debate.”

The strongly worded open letter published Wednesday and signed by 90 people, including Edie Windsor, the plaintiff in the U.S. Supreme Court case that resulted in gay marriage being legalized nationally, and former Rep. Barney Frank (D-Mass.), said the 90 signatories “unequivocally express our collective and deep concern” about the incident on Friday.

“We are united in our belief that what transpired at [the conference, when demonstrators disrupted a reception by A Wider Bridge, a group that forges ties between LGBT Jews in Israel and North America] was dangerous, deeply disturbing, and given the use of epithets like ‘kike,’ clearly anti-Semitic,” the letter stated.

The letter called on the National LGBTQ Task Force to have an “outside, independent party” review the incident at the conference to determine how it happened and what should be done to “ensure that it will not happen again.”

The signatories said they also believe the Task Force “as well as all other LGBTQ organizations need to consider and adopt some form of an ‘active pluralism’ policy with respect to these issues. Such a policy, while respecting the free speech rights of individuals and groups, would not allow protesters to effectively censor the speech of other groups, much less threaten the physical well-being and safety of those with whom they do not agree, including Jewish and Israeli LGBTQ groups.”

The Task Force’s executive director, Rea Carey, issued a statement Tuesday condemning anti-Semitism and promising to launch a review to make needed changes in the areas of “inclusiveness and program content review; safety and security; and promoting conversation and peaceful protest.”

In the weeks leading up to the conference, the Task Force, under pressure from anti-Israel activists, canceled the A Wider Bridge reception but reinstated it shortly after.

The letter notes that the signatories “have diverse, and often shapely conflicting, views about the difficult issues raised by the Palestinian-Israeli conflict and the best way to resolve them,” but says, “What we all do share is our history and experience in connection with the struggle for LGBTQ equality in the United States and elsewhere.”

The letter also says it is “intellectually, politically and morally dishonest to claim that in the name of freedom, liberation, or some other progressive ideal, there is a right to target and exclude Jewish/Israeli groups, to foment physical intimidation and harassment, and to encourage anti-Semitism.”

A statement issued Saturday from A Wider Bridge said protesters had entered the reception and taken over the stage, preventing the visiting Israelis from speaking.

“Last night the values of free speech and respectful communication that we all value and that should be the hallmark of the Creating Change conference were replaced by a disgraceful authoritarian-like action that seeks to silence the voices of anyone the protesters feel don’t adhere to their rigid dogma,” the statement said. “Lies and gross distortions about A Wider Bridge and Israel were being repeated throughout the conference and at the protest. We look forward to working with the leadership of the Task Force to ensure that Creating Change can be a welcoming and safe space for LGBT people, Jews and non-Jews, who care about Israel.”