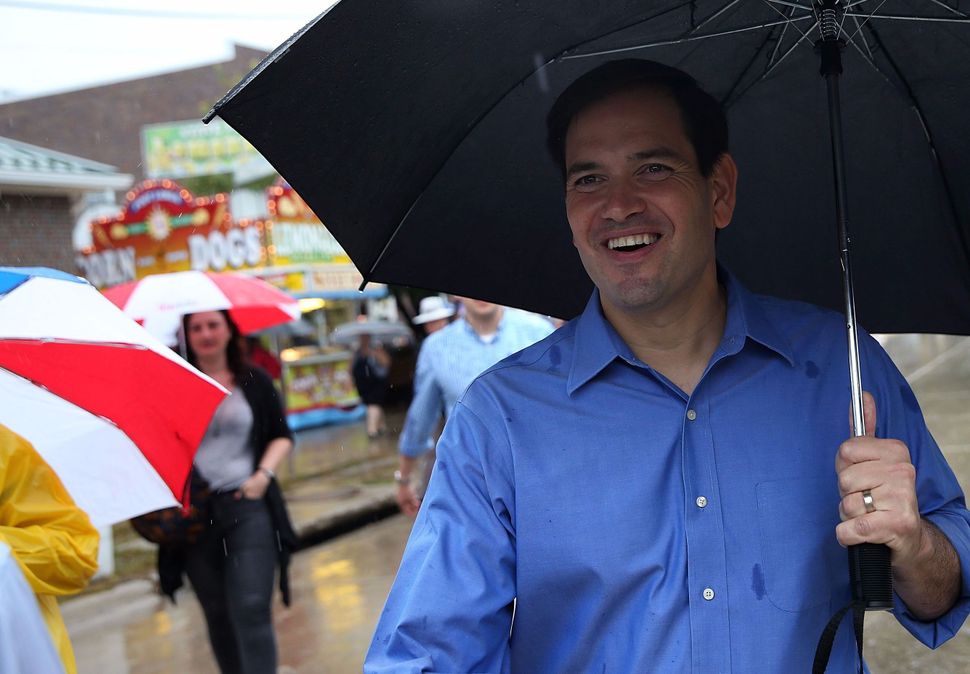 Sen. Marco Rubio, R-Fla., reiterated his pledge to revoke the nuclear deal struck last year with Iran and defended his proposal to shut down mosques where radical speech is reported.

“When I am president of the United States, if there is some place in this country where radical jihadists are planning to attack the United States, we will go after them wherever they are,” Rubio said Thursday night in Des Moines, Iowa, in the last Republican debate prior to the Iowa caucuses on Monday.

The debate was largely overshadowed by frontrunner Donald Trump’s decision to sit out the exchange because of a feud with Fox News Channel, the network that broadcast the debate. Trump held a rally at a nearby venue during the Fox debate.

Sen. Ted Cruz, R-Texas, who is running closest to Trump in polling in Iowa, addressed the Trump factor in the debate’s first question by joking about the real estate magnate’s famously insulting style.

“Let me say I’m a maniac and everyone on this stage is stupid, fat, and ugly,” Cruz said, before turning to candidate Ben Carson, whose skills as a brain surgeon are legendary.

“And Ben, you’re a terrible surgeon,” Cruz said. “Now that we’ve gotten the Donald Trump portion out of the way. I want to thank everyone here for showing the men and women of Iowa the respect to show up and make the case to the people of this state and the people of the country why each of us believe we would make the best commander in chief.”

The caucus on Monday, the first in the nominating contest, is expected to winnow the Republican field from the 12 candidates currently vying for the nomination.

Trump’s presence was felt repeatedly in the debate. Florida Gov. Jeb Bush, asked a question about anti-Muslim discrimination, mentioned Trump, who has suggested banning temporarily banning Muslims from entering the United States and creating a registry of Muslims in the country.

“I think it’s important that when we’re running for the highest office in the land that we recognize that we’re living in dangerous times and we have to be serious about it, that our words have consequences,” Bush said. “Donald Trump, for example — I’m glad — I mentioned his name again just if anybody was missing him. Mr. Trump believed that in reaction to people’s fears that we should ban all Muslims. Well, that creates an environment that’s toxic in our own country.”

New Jersey Gov. Chris Christie also rejected profiling of Muslims, while other candidates, including Rubio, said there was a need to weed out radicals.

Responding to Rubio’s comments about revoking the Iran deal, Ohio Gov. John Kasich, one of a minority of Republicans who have said the deal would be too advanced to revoke by the time a new president assumes office, said that reintroducing unilateral sanctions would not be effective. Instead, Kasich said he would closely monitor Iranian compliance and work to reapply multilateral sanctions should Iran cheat.

“I’d be lining up our allies to say that, if one crossed T or one dotted I does not occur, they are — violate the agreement, we slap back on sanctions,” he said.