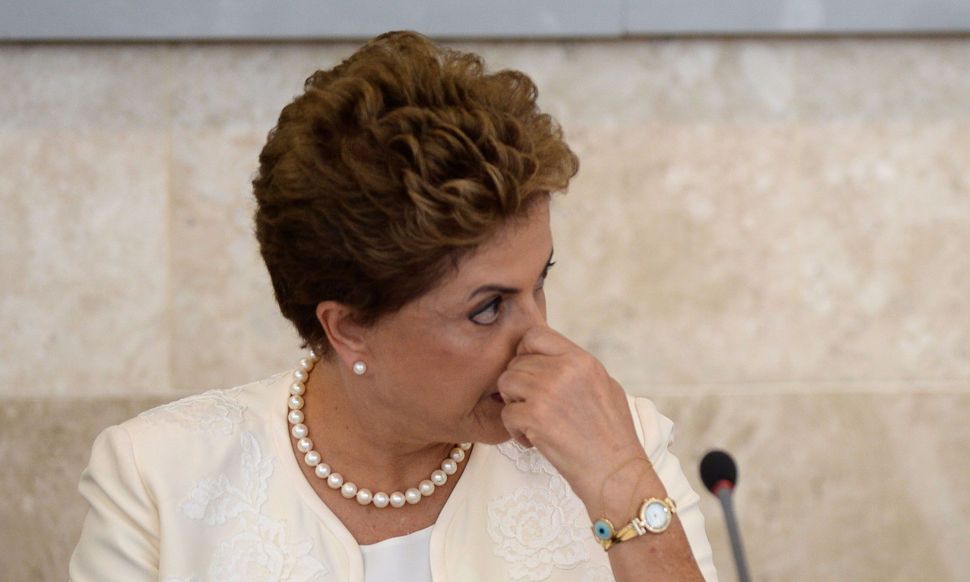 RIO DE JANEIRO — Brazilian President Dilma Rousseff was absent for the third year in a row at a Holocaust event that was even attended by the Palestinians.

The ambassador of the Palestinian Authority in Brazil joined several Jewish and non-Jewish officials to commemorate the Holocaust at a ceremony in Brazil’s capital.

“I could not be absent. It is very important to remember this date,” PA envoy to Brazil Ibrahim Alzeben declared at the event in Brasilia in honor of International Holocaust Remembrance Day.

The ambassadors of Germany, Poland, Russia and Ukraine also attended. The majority of Brazil’s 120,000-strong Jewish community, which is mostly Ashkenazi, has origins in these countries.

“By keeping the memory of the Holocaust alive, we alert the present and future generations about the moral abyss we face when prejudice becomes the rule and intolerance becomes the practice,” said the Rousseff statement read by Civil House Minister Jacques Wagner, who is Jewish.

A special homage was paid to Ben Abraham and Aleksander Laks, the former presidents of the Brazilian Holocaust Survivors Associations in Sao Paulo and Rio de Janeiro who died both in 2015. In an ecumenical moment, a teenage member of an Afro-Brazilian religion who made headlines after she was stone-attacked last year lit one of the menorah candles who represented the 6 million Jews murdered by the Nazis.

“Only a few decades after the Holocaust, the old anti-Semitism has been updated as anti-Zionism: the denial of the Jews’ right to have their State of Israel. In Brazil, we are still fortunate to be far from radicalism and violent actions,” said Fernando Lottenberg, Lottenberg, president of the Brazilian Israelite Confederation, the country’s umbrella Jewish organization.

Rousseff’s government is in a fight with Israel over the appointment of settler leader to be Dani Dayan. Brazil said it would not recognize him for that reason.

The Israeli ambassador chair has been vacant in Brasilia since December.