Activists distributed thousands of fake anti-Israel versions of The New York Times in Manhattan and promoted an online version via social media.

The phony New York Times — which included such fictitious articles as “IDF Generals Blame Israeli Government for Recent Violence” and “Congress to Debate U.S. Aid to Israel — was handed out Tuesday morning at several bustling commuter hubs, including Grand Central Terminal and Penn Station. The organizations or individuals behind the campaign was not clear.

The fake paper mimics the Times’ trademark fonts and formatting, and describes itself as “Rethinking Our 2015 Coverage on Israel-Palestine — A Supplement.” In addition to its “corrections” (“It has come to our attention that the vast majority of articles about violence in Israel and the occupied Palestinian territories have failed to include the names of Palestinians killed by Israeli forces.”) and articles, it includes fake ads, such as one for “TimeUp” watches with the motto “The Moment is Now: End U.S. Military Aid to Israel.” 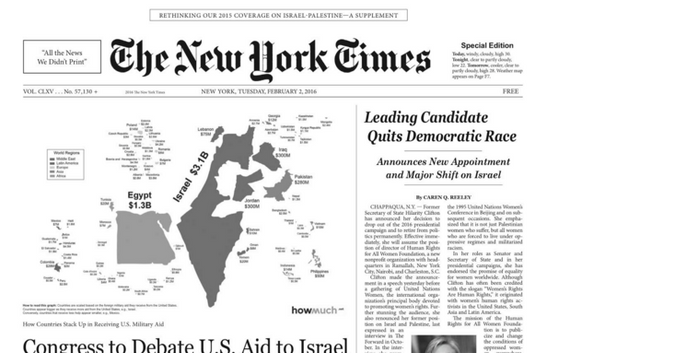 The Times said the paper had nothing to do with the stunt — and rejects it.

“We’re extremely protective of our brand and other intellectual property and object to this group (or any group’s) attempt to cloak their political views under the banner of The New York Times,” a spokeswoman told the Independent. “We believe strongly that those advocating for political positions are best served by speaking openly, in their own voice.”

Some are speculating that the publication is the work of a group called The Yes Men that did a similar campaign in 2008.

In a statement, Jonathan Greenblatt, the CEO of the Anti-Defamation League, said the “creators of the phony newspaper are entitled to their view that The Times is biased in Israel’s favor, and to disagree with critics of The Times, some of whom think The Times has a bias against Israel. However, to do it in a surreptitious manner, as they have done, is deceptive.”

Greenblatt also criticized the fake publication for being published anonymously and conveying “false facts and themes consistent with anti-Israel advocates and supporters of the Boycott, Divestment and Sanctions movement.”

“New Yorkers are sophisticated enough to see that this ‘news’ was not fit to print,” Greenblatt added, a reference to the Times’ slogan, “All the News That’s Fit to Print.”