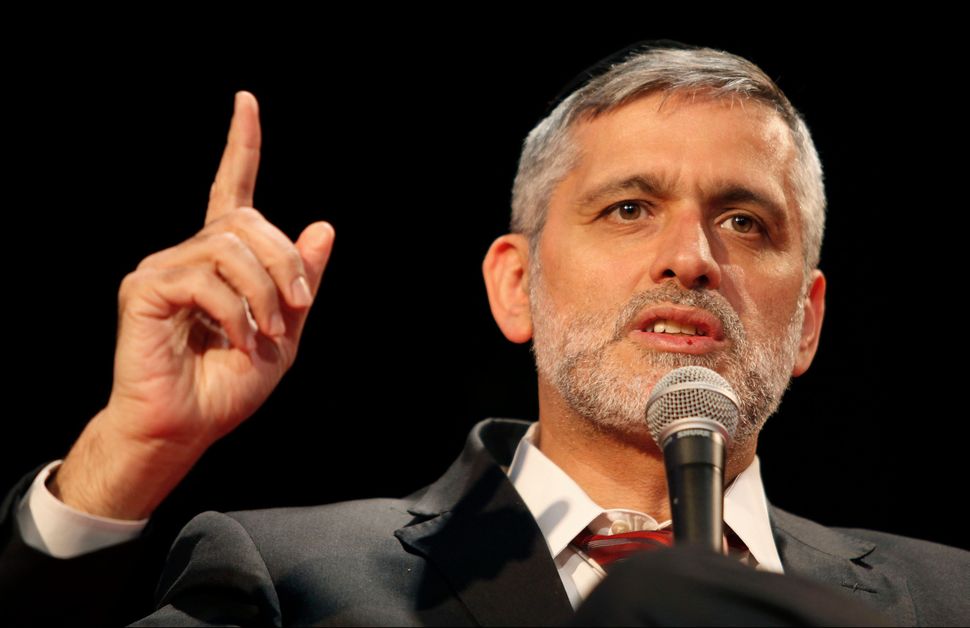 JERUSALEM — A former head of the Shas Sephardic Orthodox party slammed the Israeli Cabinet’s approval to expand the egalitarian section of the Western Wall, joining several politicians who have ridiculed the deal and liberal movements of Judaism.

“This is a horrible disaster and an attack on the Holy of Holies,” Eli Yishai said in an interview Thursday with Army Radio. “The next thing we’ll see is Reform Jews putting tefillin on dogs and calling them up to the Torah.”

Yishai is currently not serving in the Knesset. The party he formed more than a year ago, Yachad, failed to reach the electoral threshold in the 2015 elections.

His condemnation is the latest in a series of attacks against the agreement and the liberal movements.

Rabbi Rick Jacobs, president of the Union for Reform Judaism, or URJ, criticized the attacks in a statement issued Wednesday.

“Legitimate differences of opinion, practice, and belief are longstanding dimensions of authentic Jewish life. But these recent outbursts of prejudice expose an ugliness that has no place within our noble Jewish tradition or within the government of the Jewish state,” Jacobs said in the statement. “We hope and pray for a day when Israel will truly be a state where Jews and non-Jews of all beliefs and practices live side-by-side in harmony and with respect.”

Deputy Education Minister Meir Porush of the haredi Orthodox United Torah Judaism party, and a secular lawmaker, Yariv Levin of Likud, are among those who have condemned the agreement and the liberal streams. Israeli Prime Minister Benjamin Netanyahu has condemned those attacks.

“We commend the prime minister for speaking out against, and disassociating himself from, these most recent disparaging and divisive statements,” Jacobs said. “But it can no longer be enough to make public statements after each of these reprehensible occurrences, which are increasing in their frequency. We should be able to expect more civility and respect from every person, and especially so from those in positions of power.”

Moshe Gafni, a haredi Orthodox lawmaker who chairs the Israeli Knesset’s powerful Finance Committee, said he would not recognize the decision and called Reform Jews “a group of clowns who stab the holy Torah.”