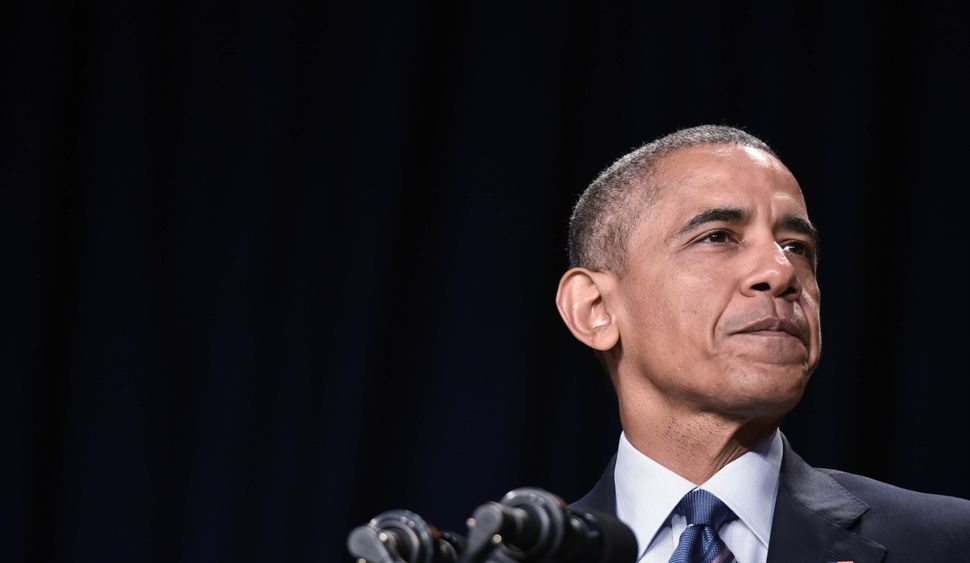 President Barack Obama cited examples of Jews and those who rescued them in a prayer day message calling on Americans to overcome fear and welcome the stranger.

Obama in remarks Thursday to the annual National Prayer Breakfast cited multiple examples of faith communities working together to bring relief to natural disaster zones, to care for the sick and to welcome refugees.

“When Syrian refugees seek the sanctuary of our shores, it’s the faithful from synagogues, mosques, temples, and churches who welcome them, the first to offer blankets and food and open their homes,” he said to the gathering organized by a Christian group and drawing many leading U.S. lawmakers and other influential people.

A broad array of Jewish groups has backed the White House’s call to reject appeals from Republican presidential candidates to stop the intake of refugees from Syria.

Obama lingered recounting the heroism of Sgt. Roddie Edmonds, a POW who refused to reveal to a German commandant during World War II which troops under his command were Jewish. The president spoke last week at the Israeli embassy event in Washington at which Edmonds and three others were named by Yad Vashem, Israel’s Holocaust remembrance authority, as righteous among the nations.

Edmonds ordered all U.S. troops to fall out when German commanders at the camp asked to bring out Jewish troops.

Obama went on to recount a recent meeting with Rami Nashashibi, a Muslim in Chicago, who wondered the day after militant Islamist terrorists massacred 14 people in San Bernardino, Calif., in December, whether it was safe to pray while watching over his daughter in a playground.

“And he thought of all the times he had told her the story of the day that Dr. Martin Luther King, Jr., and Rabbi Robert Marx, and 700 other people marched to that very same park, enduring hatred and bigotry, dodging rocks and bottles, and hateful words, in order to challenge Chicago housing segregation, and to ask America to live up to our highest ideals,” Obama said. Nashashibi put out his prayer rug and prayed.

Marx, in 1966 the director of the Chicago Jewish Federation, wrote an anguished letter to his Jewish constituents explaining why he felt compelled to march with King through a Chicago neighborhood violently resisting integration.