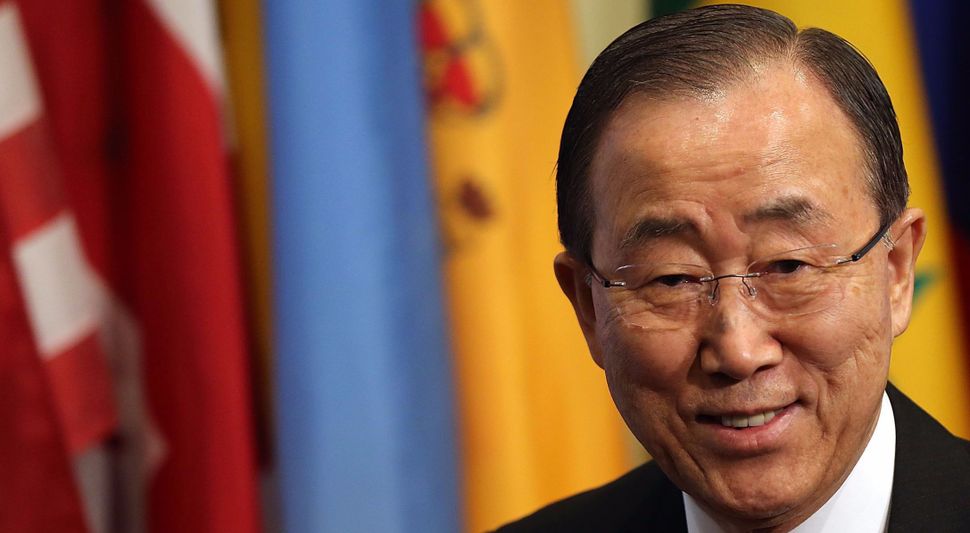 U.N. Secretary-General Ban Ki-moon was heckled and some worshippers walked out during his speech at a New York City synagogue’s Shabbat services.

Ban did not mention Israel during an address on Saturday morning at the Park East Synagogue in Manhattan in which he condemned intolerance and bigotry, the Times of Israel reported. Members of the Zionist Organization of America handed out leaflets outside the Orthodox synagogue in protest of Ban’s appearance.

His appearance came more than two weeks after Ban said in an address to the U.N. Security Council that Palestinian violence against Israel is a result of “frustration” over “a half century of occupation and the paralysis of the peace process.”

At the synagogue, Ban said, “Only by breaking down the walls of intolerance and division can we prevent new conflicts and genocide.” He called on people to work together “to build bridges and end anti-Semitism, bigotry against Muslims and all other forms of hatred.”

The speech was in honor of International Holocaust Remembrance Day, which was observed around the world late last month.

“I will always be haunted by all that I saw and heard when I visited Auschwitz in 2013,” Ban told the congregation. “The testimonies of Holocaust survivors remind us what happens when we allow inhumanity to prevail. They also remind us of the power of the human spirit and the inherent dignity and worth of every person.

“The memory of the Holocaust guides us by reminding us what can happen when we stop seeing our common humanity. Only by remembering the past can we hope to shape a better future.”

He recalled the genocides in Rwanda, Bosnia-Herzegovina and Cambodia, and referenced current massacres in South Sudan and Syria, and murders by the Islamic State and Boko Haram.

Ban was accompanied to the synagogue by Israel’s ambassador to the United Nations, Danny Danon.

The U.N. leader had told the body’s Security Council, “It is human nature to react to occupation, which often serves as a potent incubator of hate and extremism.”

Days after the Security Council address Ban, who also condemned Palestinian terror attacks, doubled down on his remarks in an Op-Ed in The New York Times headlined “Don’t Shoot the Messenger, Israel.”