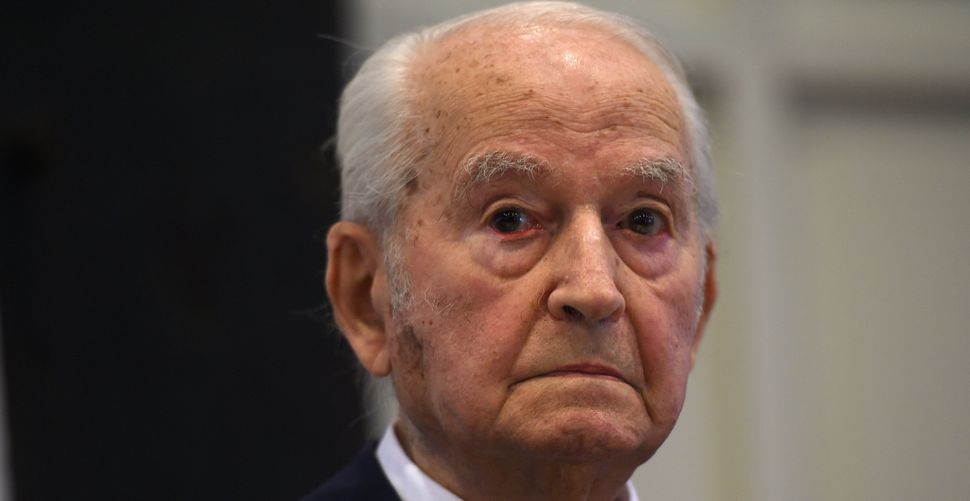 A 94-year-old survivor of Nazi Germany’s Auschwitz death camp gave his testimony in court on Thursday, face to face with a former guard, who is charged with helping in the murder of at least 170,000 people.

Leon Schwarzbaum, who lost 35 family members during the Holocaust, calmly recalled the camp’s horrors and when he had finished he directly addressed the accused, Reinhold Hanning, also 94, on the first day of his trial.

“I want to know why millions of Jews were killed and here we both are,” Schwarzbaum said, his voice beginning to tremble. 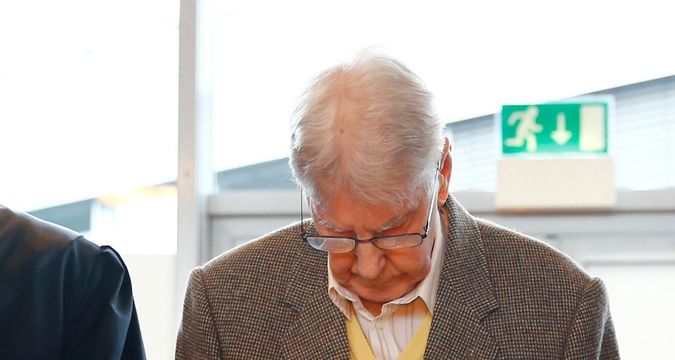 Auschwitz guard is on trial as accessory to 170.000 murders. Image by Getty Images

“Soon we will both stand in front of the highest judge – tell everyone here what happened, the way I’ve done just now!”

Hanning avoided eye contact throughout, showing no reaction to Schwarzbaum’s account. He had shuffled slowly into court and sat hunched and motionless in what is is likely to be one of Germany’s last Nazi war crimes trials.

The former guard was 20 in 1942 when he joined the SS Death Head Unit at the concentration camp in occupied Poland, where more than 1.1 million Jews were killed.

The international media frenzy surrounding the case forced authorities to move the trial from the court house in Detmold, a small town in western Germany, to a bigger venue in the suburbs.

There was a heavy police presence around the building with a squad of officers on horseback, as Hanning walked in, wearing black glasses and a brown tweed jacket and looking at the ground. The session was limited to two hours due to his age.

Prosecutors said Hanning had joined the Death Head Unit, the Nazi organization overseeing death camps, voluntarily at the age of 18 and fought in eastern Europe in the early stages of World War Two before being transferred to Auschwitz in January 1942.

He is accused by the prosecutor’s office in Dortmund as well as by 40 joint plaintiffs from Hungary, Israel, Canada, Britain, the United States and Germany.

Hanning will not speak himself but his lawyer may read out a statement once all the witnesses have testified, defense lawyer Johannes Salmen said after the session ended.

Germany’s Nazi war crimes office in Ludwigsburg has established that Hanning served in Auschwitz until at least June 1944.

He has admitted to having been a guard in a statement to the prosecution, but has denied involvement in the mass killings.

Investigators say he also served at Auschwitz’s Birkenau sub-division, where about 90 percent of more than 1.2 million killings in the camp were carried out in four gas chambers.

Prosecutors maintain that the Nazis’ machinery of murder hinged on people like Hanning guarding the prisoners, and accuse him of expediting, or at least facilitating, the slaughter.

“The final decision over life and death was made by the SS men,” prosecutor Andreas Brendel said, after recounting the selection process of victims when they arrived at the camp.

Old and sick people, pregnant women, children under 13 and parents not letting go of their children were separated from their families and immediately sent to the gas chambers.

More witnesses are expected to testify in the trial, which is expected to go on until the end of May.

A precedent for charging former death camp employees as accessories to murder was set in 2011 when death camp guard Ivan Demjanjuk was convicted.

Last year, 94-year-old Oskar Groening, known as the “bookkeeper of Auschwitz,” was sentenced for being an accessory to the murder of 300,000 people in Auschwitz.

Three other former death camp workers in their 90s – two men and one woman – are due to go on trial in the next few months.

Because of their age, their hearings will also be restricted to two hours per day, assuming they are fit to face trial.

But Nazi hunter Efraim Zuroff, responsible for war crime investigations at the Simon Wiesenthal Center, said that age should not be an obstacle to prosecution.

“When you think of these cases, don’t think of frail, old, sick men and women but of young people who devoted their energies to a system that implemented the Final Solution and aimed to obliterate the Jewish people,” he said, referring to the Nazi’s plan for the systematic extermination of the Jews.