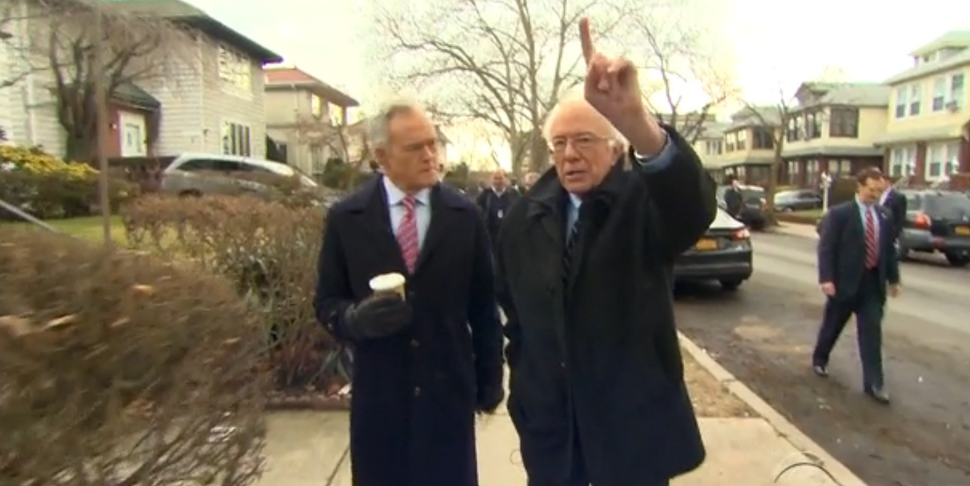 Sanders, an Independent senator from Vermont, led a CBS News reporter on a tour of Midwood section of the New York City borough, pointing out the rent-controlled apartment building on 26th Street where he grew up and recalling how his mother yearned to leave it for a single-family home.

READ: Why Bernie Sanders’ historic victory is no big deal to Jews — or America

According to Brooklyn blog Sheepshead Bites, Sanders strolled Kings Highway, one of the neighborhood’s main drags, stopping at a local Turkish restaurant Memo Shish Kebab for a lamb gyro.

“Not having enough money was a cause of constant tension,” Sanders told CBS. “And when you are 5 or 6 years of age and your parents are yelling at each other, it’s, you know — you think back on it now, you know — it’s traumatic and it’s hard.”

Sanders said he spent a lot of his childhood playing unsupervised with other children in the neighborhood, which he said taught him about democracy.

“The games were all determined not by adult cultures but kids themselves,” Sanders told CBS. “We would choose up a team — there was no other person dictating anything, we worked out our own rules. It was a very interesting way to grow up.”

The neighborhood still has a large Jewish population, although its mostly Orthodox residents generally attend yeshivas and Jewish day schools rather than the local public schools.