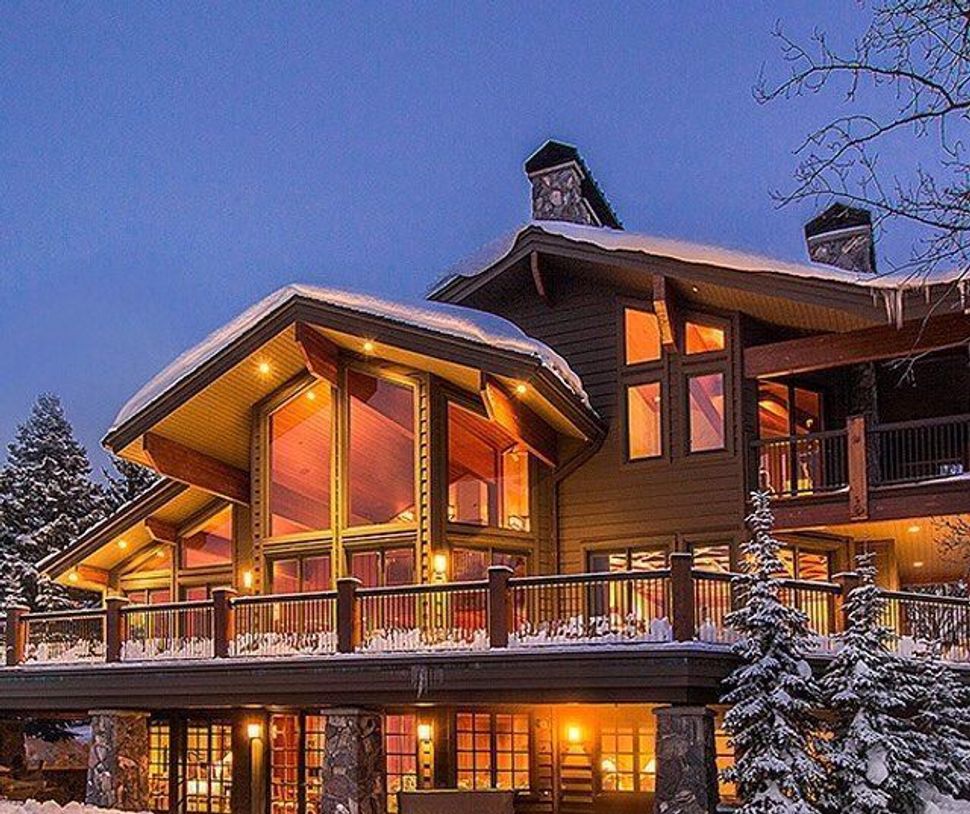 (JTA) — It may be the most elevated Shabbat service in the country, and not just because of the spirited singing.

Held in a rustic cabin in the woods off a ski slope at Deer Valley resort, the service is situated at about 8,800 feet above sea level, and it’s the nation’s — and possibly the world’s — only ski-in, ski-out Kabbalat Shabbat minyan.

There’s no way to get there by car or foot; worshipers must buy a lift ticket to Deer Valley ($120), make their way over to the four-person Sterling Express chairlift, ride to the top of Bald Mountain (elev. 9,400) and then ski down to Sunset Cabin. Beginners beware: The steep trail leading to the cabin is designated intermediate blue.

There are a few other important things to know about what’s billed locally as “Ski Schule at Deer Valley.” It’s actually held before the Sabbath, at 3 p.m. on Friday afternoons. Come on time, because the service starts promptly and lasts about 35 minutes; the lifts close at 4 p.m. Dress is definitely casual: Attendees come clad head-to-toe in ski gear, and there’s a custom of clomping around in ski boots during the V’Shamru prayer.

And don’t worry: There will be Kiddush, though it’s a sweet Concord. If you’re hoping for whiskey, you’ll have to wait till après-ski down in the valley. It’s better that way anyway: Skiing while drunk is not recommended.

The ski shul is a longstanding tradition at Deer Valley, which is famous for its beautifully groomed runs, snowboard ban (one of only three such ski resorts in the United States) and pampered customer service. There is complimentary overnight ski storage, designated staffers to help visitors load their cars at day’s end and pillow-soft tissues at all 21 lifts. And though the resort is spread across five peaks and has 2,000 acres of skiable terrain, Deer Valley has ubiquitous green-uniformed mountain hosts on hand who can help direct you to the ski shul. Once you’re on the right trail, the cabin is easy to spot: There’s an Israeli flag tacked to the log cabin’s slope-facing wall.

Most of the service’s participants tend to be visitors, not regulars. Some are Deer Valley fans who come back year and a year (a few to vacation homes they own on the mountain), but many others are first-time visitors who learn about the worship service from notices posted around the mountain.

“Quite a few years ago I saw a sign on the bulletin board at the chair lift about the service. Being interested in Jewish life, I of course dragged my family and thought it was fantastic,” said Diane Krieger, a Miami resident who has been coming since the early 2000s, before she bought a vacation home in town. “I find it incredibly uplifting that Jews will choose, even at 8,000 feet, to gather together.”

The service is led by Rabbi David Levinsky, spiritual leader at Park City’s Temple Har Shalom. A relative newcomer to Utah (Levinsky moved here last summer), the rabbi needed some serious practice before taking over the service – making turns in the snow, that is, not reciting the prayers. Levinsky, 48, describes the lessons he took as a “crash course” in skiing – literally.

“I had never skied till I came out here,” said Levinsky, whose favored sport is skateboarding. “I’m a Jewish kid from the suburbs. I wasn’t a big outdoors mountain guy.”

But seven months into his new job, Levinsky — who used to make a living as a rock musician, before getting Reform rabbinical ordination and then a doctorate in religion from Stanford University — says he has started to change. He skis two days a week now (usually for a couple of hours at a time, as many who live here do), and takes long walks with his dog in the foothills of the Wasatch mountain range.

For a rabbi in Park City, (elev. 7,000 feet), mountain activity is practically required.

“One of the goals of Har Shalom is to find interesting ways to blend mountain living with Judaism, and ski shul is one of the ways to do it,” Levinsky said. “The temple is nestled in the foothills of the Wasatch range. Sometimes we take our Judaism up the mountain.”

The Friday afternoon minyan at Sunset Cabin is, for the most part, like many liberal Kabbalat Shabbat services. It’s participatory, held in the round (or the scrum, when it’s crowded), and worshipers use customized laminated prayer booklets. The rabbi’s d’var Torah sermon usually runs about two to three minutes.

Levinsky was in a rush – it was the closing weekend of Park City’s Sundance Film Festival, and the service was the first of three he would be leading that day – but most of the worshipers took their time pulling on their goggles and strapping on their skis.

One woman stepped off the cabin’s wooden platform and immediately sank into snow up to her calf — a reminder that in Utah the snow tends to fall in feet, not inches.

A moment later she had her skis on and was ready to go. “Shabbat shalom!” she called out, and disappeared down the mountain.