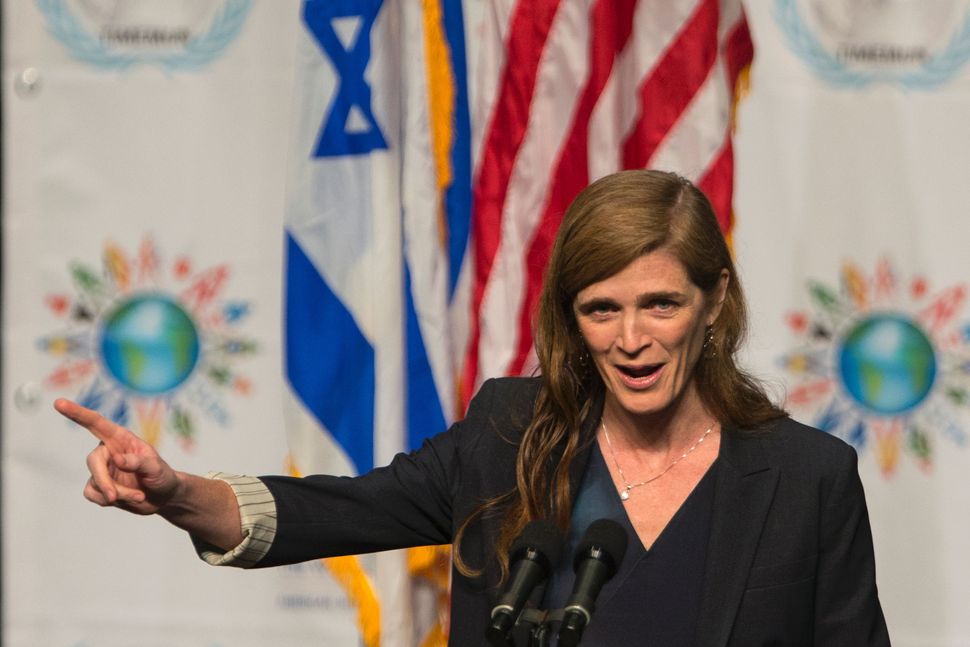 Samantha Power, the United States’ ambassador to the United Nations, is visiting Israel in part to try to improve prospects for a two-state solution.

Power arrived in Israel on Saturday for a four-day visit to the Palestinian Authority, her first as the UN ambassador.

“Power will discuss a range of regional and bilateral issues, including the United States and Israel’s shared security concerns and close cooperation,‎ prospects for a two-state solution, and the importance of UN humanitarian and peacekeeping operations in the region,” during meetings with Israeli officials, the State Department said in a statement.

Power met on Monday in separate meetings with Israeli Prime Minister Benjamin Netanyahu and with President Reuven Rivlin. Netanyahu told Power that there is a direct connection between Palestinian incitement in schools and in the media, and the latest wave of terrorism and violence, and called on the international community to demand that the PA stop the incitement, the Prime Minister’s Office said in a statement.

Rivlin called Power “a bridge between very decisive voices in the world, and we welcome you as one who can bridge gaps and as a real friend.”

He also said: “I know that you are meeting the Palestinians, and I would ask to transfer once again a message to President Abbas, that he must understand the conflict between us – the tragedy between us – can only be solved through direct negotiations. No solution can be imposed on either side, and we must negotiate to come to an understanding.”

During a speech to Israeli high school students later on Monday, Power criticized the United Nations for its disproportionate criticism of Israel. She also spoke in support of a two-state solution to the Israel-Palestinian conflict and said she hoped to see an official state of Palestine at the United Nations during her tenure.