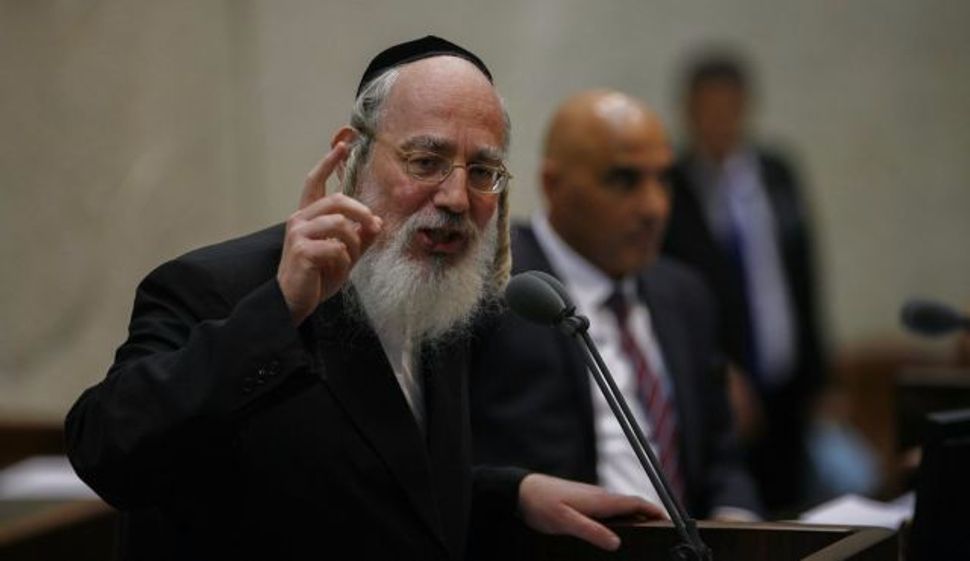 A haredi Orthodox lawmaker in Israel reportedly compared the Reform movement to a mentally ill person.

Israel Eichler of the United Torah Judaism party made his remarks Tuesday in the lead-up to a Knesset debate the next day on the Supreme Court’s decision that non-Orthodox converts can immerse in a public mikvah, according to the Israeli daily Haaretz.

“Not every mentally ill person can come to the operating room and decide the rules of medicine and force the hospital to have an operation by whatever way works,” Eichler was quoted as saying. “The High Court can’t force a hospital to allow the court’s surgeons and the court’s medicines into the operating room. And so it is intolerable that the directors of ritual baths will have to allow organizers of Reform religion-changing ceremonies into a Jewish ritual bath.”

Eichler also reportedly said the Supreme Court has “no authority to enforce Jewish law, whose source of authority is the Torah, which the High Court does not recognize as a source of its legal authority.”

Rabbi Rick Jacobs hit back at the remarks, saying they show that the ultra-Orthodox monopoly on Judaism is being loosened, and a “seismic shift” is taking place.

“Eichler’s comments yesterday are yet another example of the extreme intolerance of the ultra-orthodox religious establishment,” said Jacobs. “Clearly they feel a seismic shift in their decades old monopoly on Judaism,” he added. ”It’s time for the ultra-Orthodox MKs to learn the Torah of respect and ahavat yisrael (love of Israel), love of one’s fellow Jews and a primer on democracy is also in order.”

The head of the Reform movement in Israel, Rabbi Gilad Kariv, said on Wednesday that Eichler’s comments show that the ultra-Orthodox realize they are losing the battle for public opinion in Israel.

Earlier this month, the Supreme Court ruled that mikvahs in Israel must open to non-Orthodox conversion rites. Previously, Israeli mikvahs have denied access for conversion immersions to Reform and Conservative converts. Israel’s mikvahs are run by Israel’s Religious Services Ministry, which operates in lock-step with the Orthodox-dominated Chief Rabbinate.

Rabbi Rick Jacobs, president of the Union for Reform Judaism, in a statement Wednesday called Eichler’s remarks “another example of the extreme intolerance of the ultra-Orthodox religious establishment. Clearly they feel a seismic shift in their decades-old monopoly on Judaism in Israel. Their stranglehold on Judaism is being loosened, and their response is desperate and pathetic.

“It is hard to imagine what twisted Torah MK Eichler studies when he characterizes the largest movement in Jewish life as ‘mentally ill.’ Our Torah teaches us the values of pluralism and of tolerance — and it teaches us not to use phrases like ‘mentally ill’ as an epithet.”

In an Op-Ed posted Wednesday on the website of the Jewish Press, an Orthodox Jewish weekly newspaper, Eichler asserted that “the prime minister, the supreme court and the secular establishment are subservient to the Reform millionaires.”

He added that Reform clergy are “investing millions in bribing Israeli public opinion shapers, something the Christian missionaries and certainly the Muslim preachers would dare to do.”