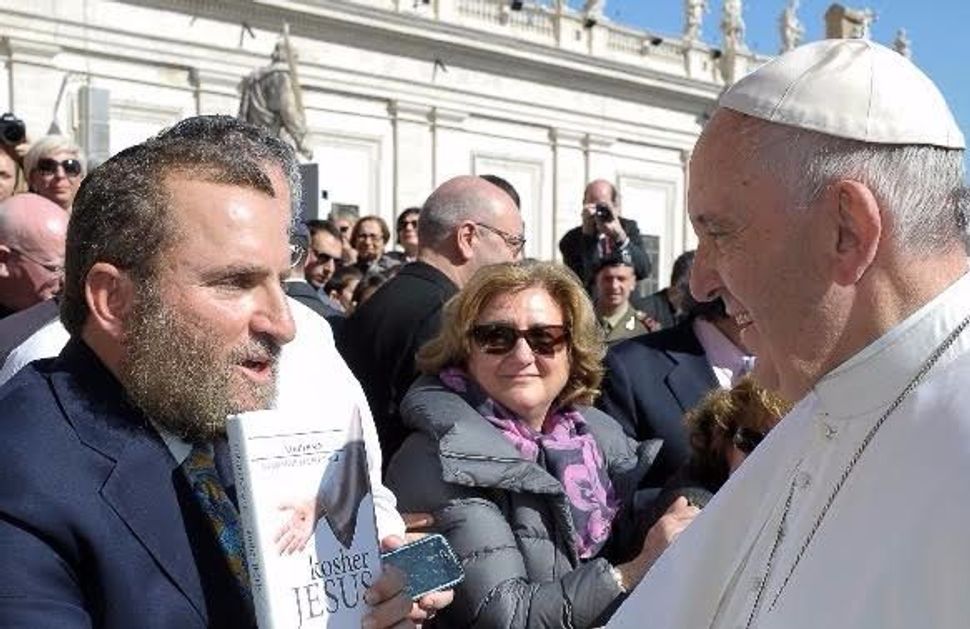 In a brief audience at the Vatican Wednesday, Rabbi Shmuley Boteach urged Pope Francis to condemn current day anti-Semitism in Europe and acts of hatred directed at Israel.

Boteach, who gained national recognition as the rabbi to the stars, told the Forward that during the short conversation with Pope Francis, he asked the pontiff to raise his voice as a moral authority on issues that are currently threatening the Jewish people.

“Your condemnation of anti-Semitism in unconditional terms and acknowledgement that there is no difference in hating Israel and hating the Jewish people, is vital,” Boteach told Pope Francis.

He added that there is “no difference between anti-Semitism and the hatred of Israel.”

The pope, according to Boteach, listened and asked the visiting rabbi to pray for him to have deeper understanding of this issue.

Boteach also handed him a copy of his latest book “Kosher Jesus,” which, he believes, could help “strengthen the theological bridges between Christians and Jews.”

Credited with arranging the Vatican audience was Gary Krupp, who has been known for his role as the leading voice within the Jewish community in favor of Pope Pius XII, the World War II era head of the Catholic Church. Pius XII’s silence during the Holocaust has led many Jewish activists and scholars to call for rejecting his canonization.

This is the second audience Krupp, who was knighted by the Vatican, arranged for Boteach with the pope, despite the fact that Boteach and Krupp hold opposing positions regarding Pius XII. While Krupp, through a foundation he created, has been tirelessly promoting the acceptance of Pius XII, Boteach is a harsh critic of the former pope and has written extensively against his war time behavior. “Even though I vehemently disagree with him on Pius XII, we have still remained close friends,” Boteach said.