Donald Trump Works His Magic on a Frustrated AIPAC

Washington – Proving his critics wrong once again, Donald Trump entered Tuesday an arena potentially packed with skeptical Jewish pro-Israel activists, and worked his magic on them.

Early warnings of protests and boycotts turned out to be overstated, as Trump, in his first teleprompter-read speech on the campaign trail, threw out one applause line after the other, ranging from criticism of the nuclear deal with Iran to direct attacks at President Obama.

And all in his signature Trump style.

“Hillary Clinton, who is a total disaster by the way, she and President Obama have treated Israel very, very badly,” Trump said, adding that under his presidency, “the days of treating Israel like a second-class citizen will end.”

Jewish liberals and centrists had hoped Trump’s AIPAC speech would unite the community in a clear rejection to Trump and what they view as his troubling messages on race, minorities, immigration, and violence. But instead, the pro-Israel lobby awarded the New York billionaire with an embrace. It was slightly less warm than those Trump receives at his raucous, countrywide rallies, but the audience, excited by his forceful, pro-Israel presentation, forgave his past comments and heated rhetoric.

Hardly anybody walked out as Trump took the stage at the Verizon Center in Washington. Protesters in the arena were few and did not draw much attention. A small group of Reform rabbis, led by Rabbi Rick Jacobs, president of the Union for Reform Judaism, left the hall before Trump began to speak and studied Jewish texts outside. “We were disappointed but not surprised that Mr. Trump did nothing tonight to allay our deep concerns about his campaign,” Jacobs said afterwards. “It still seems that he does not share our values of equality, pluralism, and humility.” Outside the sports hall, a small group of demonstrators peacefully protested Trump and AIPAC for inviting him. 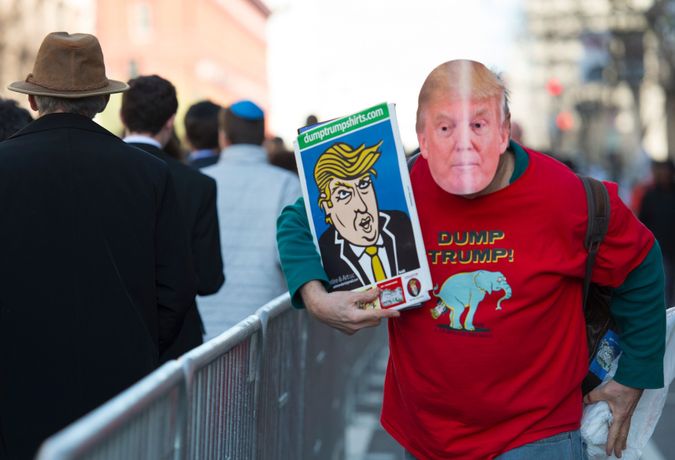 Trump attracted protestors, but they made their case outside the convention hall. Image by Getty Images

But from the revolving stage at the center of the arena, Trump, who is used to protests during his rallies, could easily chalk down his AIPAC performance as one of the quietest events to date.

The Donald, as some supporters like to refer to him, pushed all the right buttons to activate the pro-Israel crowd’s enthusiastic response. He presented a three-pronged plan to deal with Iran in a post-nuclear deal situation, assuring the audience that he studied the agreement “more than anyone else” and that, as president, he would move to “dismantle” the accord. He also placed the blame for the lack of any movement on the Middle East peace process squarely on the Palestinians.

“Their heroes,” he said, “are those who murder Jews”: another applause line. Trump also threw in the promise to move the United States embassy in Israel to Jerusalem, a standard pledge for all Republican presidential candidates.

Compared to his usual stump speech, Trump spent more time on policy than on politics, but this relative caution was unnecessary. The crowd loved it when he took direct shots at the administration and President Obama, whom he described as the “worst thing to ever happen to Israel.” Trump offered an outlet to an audience of pro-Israel activists recovering from their fierce fight against the Obama administration over the Iranian nuclear deal, winning rounds of applause after stating: “President Obama, in his final year – yay!”

Entering the AIPAC event, Trump was seen as wavering on some key issues relating to Israel, mainly his pledge to remain “neutral” when it comes to brokering a peace accord between Israel and the Palestinians. During the AIPAC conference Trump came under attack from all the other candidates who addressed the forum for this statement, but in his speech he offered no explanation or retraction. Instead, Trump, stated that “The Palestinians must come to the table knowing that the bond between the United States and Israel is absolutely unbreakable.”

Another stumble occurred just hours before Trump spoke to AIPAC. During a press conference in Washington he was asked if Israel would also be required to pay the U.S. for its military support, just like Trump promised to demand from South Korea, Japan and Germany. “I think Israel will do that also,” he responded, seemingly questioning the foundation of the pro-Israel advocacy efforts carried out by AIPAC. But later, asked by reporters to clarify, Trump walked back the comment.

Donald Trump Works His Magic on a Frustrated AIPAC