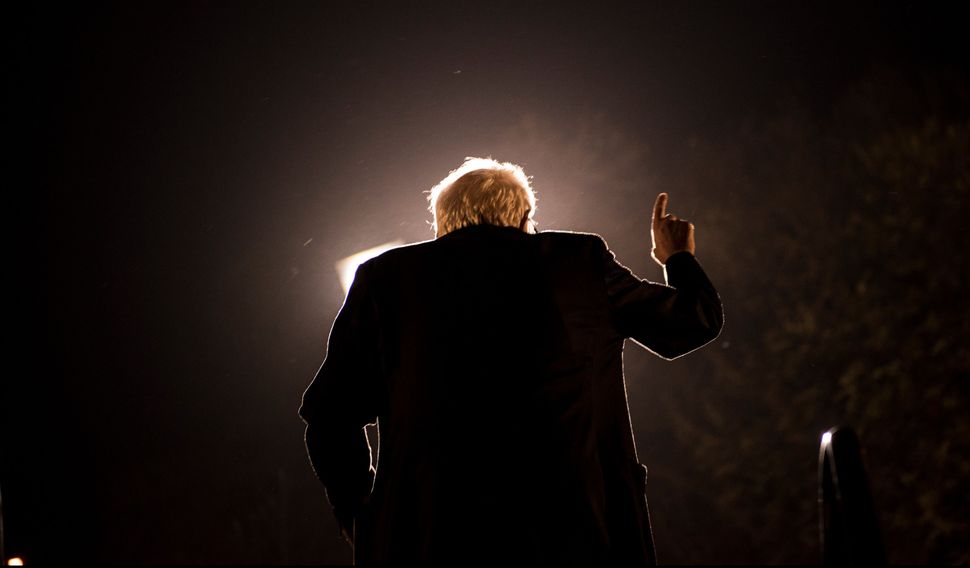 Bernie Sanders says he is an ardent supporter of Israel but if he becomes President of the United States, he would demand the Jewish state stop the expansion of settlements in the West Bank, halt “indiscriminate” attacks on Palestinian civilians — and strive for peace.

Sanders’ remarks came in a wide-ranging talk with the pro-Israel editorial board of , whose owner is real estate mogul Mort Zuckerman, the former head of the Conference Of Presidents Of Major Jewish Organizations.

Sanders, who is Jewish, said that good ties with Israel would depend on whether there is a sea change in policy.

“Israel will make their own decisions. They are a government, an independent nation. But to the degree that they want us to have a positive relationship, I think they’re going to have to improve their relationship with the Palestinians,” he said.

Sanders stuck to his guns when it came to questions on Jewish settlement growth in the occupied West Bank — even as The News edit board told him that his putting the onus on Israel “changes the dynamic in the negotiations” — and the baseline stances in long-stalled peace talks.

“There’s going to be a lot of things on the baselines,” Sanders said. “There are going to be demands being made of the Palestinian folks as well.”

But “for long-term peace in that region, Israel cannot just simply expand when it wants to expand with new settlements,” the Vermont senator said.

He even called for the dismantling of “illegal” settlements, as defined in international treaties signed by the U.S. government.

“For long-term peace in that region, Israel cannot just simply expand when it wants to expand with new settlements.”

“I think if the expansion was illegal, moving into territory that was not their territory, I think withdrawal from those territories is appropriate.”

ON ISRAEL’S RIGHT TO EXIST

Sanders insisted he would also demand change from the Palestinians.

Sanders would demand “the absolute condemnation of all terrorist attacks.”

At the same time, he took a few more jabs at Israel for the 2014 attack on Gaza after the terror group lobbed hundreds of missiles into Israeli border towns.   ”I think most international observers would say that the attacks against Gaza were indiscriminate and that a lot of innocent people were killed who should not have been killed,” he told The News.

“My understanding is that a whole lot of apartment houses were leveled. Hospitals, I think, were bombed. So yeah, I do believe and I don’t think I’m alone in believing that Israel’s force was more indiscriminate than it should have been.”

“I think, long-term, we cannot ignore the reality that you have large numbers of Palestinians who are suffering now, poverty rate off the charts, unemployment off the charts, Gaza remaining a destroyed area,” he said.

“I do believe and I don’t think I’m alone in believing that Israel’s force was more indiscriminate than it should have been.”

“And I think that for long-term peace in that region, and God knows nobody has been successful in that for 60 years, but there are good people on both sides, and Israel is not, cannot, just simply expand when it wants to expand with new settlements.

“So I think the United States has got to help work with the Palestinian people as well. I think that is the path toward peace.”

Sanders also touched on much of his stump speech in his sitdown with The News, like his assertion that he’ll break up the big banks.

9 things #BernieSanders should’ve known about but didn’t in Daily News interview https://t.co/KW7BMrTEI0 How often can you say ‘don’t know’?

Critics noted the number of times the candidate, when pressed for specifics, revealed more of what he didn’t know than what he did.

Among them was The Washington Post’s Jonathan Capehart in a biting column headlined, “9 things Bernie Sanders should’ve known about but didn’t in that Daily News interview.”

Capehart cited issue after issue — from fighting ISIS to his plan to redistribute wealth — that Sanders should have had know more about.

“The more I read the transcript, the more it became clear that the candidate for the Democratic presidential nomination doesn’t know much beyond his standard stump speech about breaking up the banks and how he had the good judgment to vote against the Iraq War in 2002,” wrote the Post columnist.

Capehart, it should be noted, once was a member of the The Daily News editorial board.