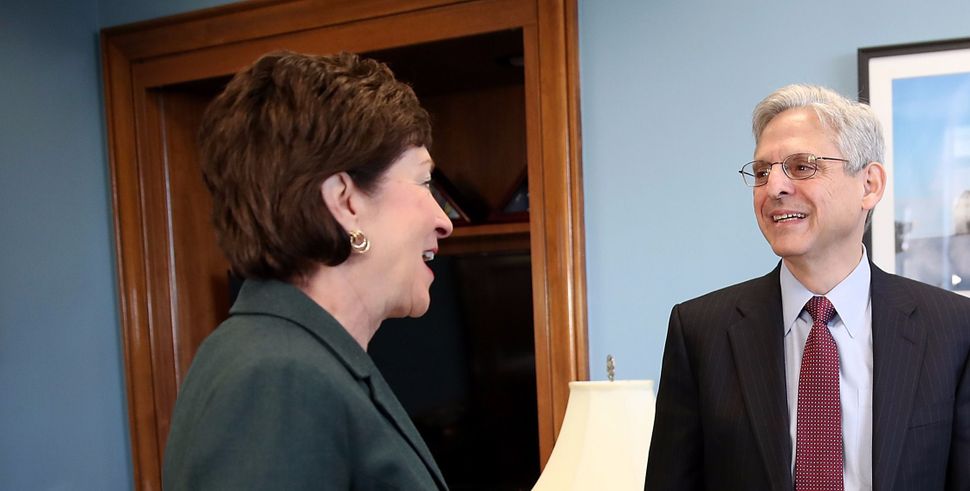 Susan Collins of Maine became only the second Republican senator to meet with Merrick Garland since Obama nominated the centrist appellate judge last month to fill the court’s vacancy left by the Feb. 13 death of Justice Antonin Scalia.

The hourlong meeting came at a time when Republican senators are facing mounting pressure from conservative activists to go along with Senate Majority Leader Mitch McConnell’s plan to block any nominee chosen by Obama.

“The meeting left me more convinced than ever that the process should proceed. The next step, in my view, should be public hearings before the Judiciary Committee,” Collins told reporters.

About two hours later, McConnell told reporters, “It’s safe to say there will not be hearings or votes” on Garland, a position he has held to since the day Scalia died.

Collins called Garland “well-informed, thoughtful, impressive, extraordinarily bright and with a sensitivity” toward the roles assigned under the Constitution to the government’s executive, legislative and judicial branches.

McConnell and Senate Judiciary Committee Chairman Chuck Grassley have said Obama’s successor, who will be elected on Nov. 8 and take office on Jan. 20, should fill Scalia’s vacancy.

Grassley has invited Garland to a breakfast meeting to explain why he will not hold hearings, a Grassley spokeswoman said on Monday.

Democrats kept up their attack on Republicans for blocking Garland. Dick Durbin of Illinois, the second-ranking Senate Democrat, said if McConnell stands firm, Garland would be “the first presidential nominee to the Supreme Court in history to be denied a hearing.”

The court is now split 4-4 between conservatives and liberals, meaning Scalia’s successor could influence its ideological direction for years to come.

Republican Arizona Senator Jeff Flake, set to meet next week with Garland, said if a Democrat wins the presidential election, Garland should be confirmed by the Senate “in a heartbeat” during a post-election legislative session.

Some Republicans are concerned that Hillary Clinton, the front-runner for the Democratic presidential nomination, would select a more liberal nominee than Garland.

Flake’s fellow Judiciary Committee member Lindsey Graham dismissed the idea of a “lame-duck” session to confirm Garland. The South Carolina Republican said Garland will not be confirmed, adding, “What’s the purpose of a hearing, just to beat him up?” — Reuters

“Considering a Supreme Court nominee is one of the Senate’s most important constitutional responsibilities.

“During our lengthy discussion this morning, Chief Judge Garland and I discussed a wide variety of issues, ranging from executive overreach and the separation of powers, to Second Amendment cases, to his judicial philosophy. Judge Garland gave thorough, impressive responses to all of my questions, and I found him to be well informed, thoughtful, and extraordinarily bright.

“Throughout my time in the Senate, I have always found that whether its legislation, nominations, or treaties, we are best served by following the regular order. That is why I have called for the Senate to proceed to the next step by holding public hearings.

“My meeting today with Judge Garland left me more convinced than ever that the process should proceed. Public hearings before the Judiciary Committee would allow that the issues that we explored in my office today to be further reviewed and analyzed by the Senate.”