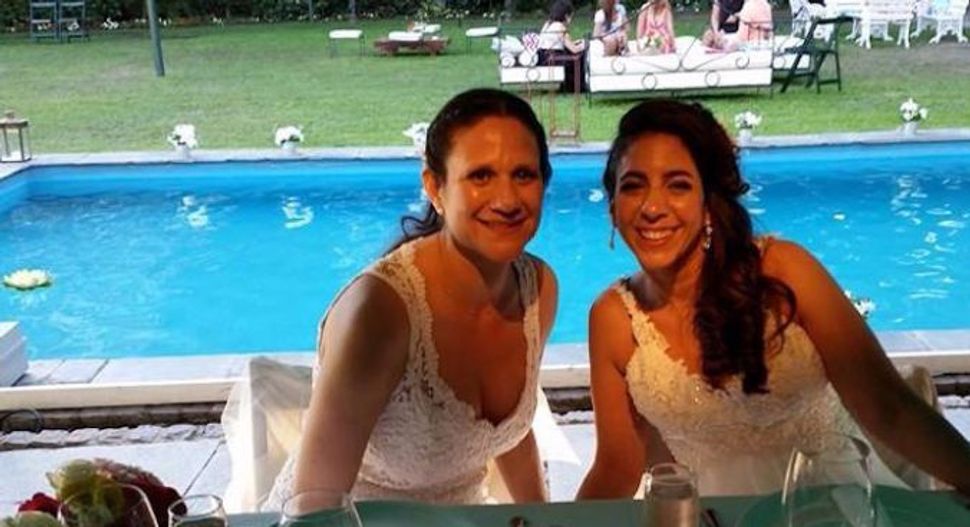 The ceremony took place on Sunday evening at NCI Emanu El Temple of Buenos Aires. It was officiated by a female rabbi, Rabbi Karina Finkielstein.

Victoria Escobar, 36, who is a convert to Judaism, and Romina Charur, 35, together entered the synagogue filled with their 300 guests. The rabbi waited for the brides and conducted them to the chuppah. Less than one hour later, Finkelstein read in Hebrew from the ketubah, or marriage contract, that consecrated the wedding between “Shirly daughter of Rafael and Ruth” (Charur) and “Ruth, daughter of Abraham and Sarah” (Escobar).

The couple was married in a civil ceremony in 2014.

The rabbi spoke under the chuppah about the couple and how about two years ago they began to participate actively in the NCI community, including taking courses in parallel, such as introduction to Judaism, Torah, and Talmud. The rabbi also spoke of the demanding Beit Din that Escobar faced, which approved her conversion.

Victoria Escobar was raised in a non-practicing Catholic family and converted to Judaism through the Conservative Latin American rabbinical seminar. She told the Argentinian media outlet Infobae that “my desire is to have Jewish children.”

Charur told Argentinean media that the couple want to raise a Jewish family and they need the ketubah to enroll their future children in Jewish schools, She revealed that they are in the process of IVF treatments with a sperm donation, and that she will gestate the baby.

The ceremony ended with the traditional cries of “Mazel Tov” from the crowd, as the two brides energetically broke two wine glasses, an image that on Monday was featured on the cover of the best-selling Argentinian newspaper, Clarin.

The announced wedding was widely reported by Argentinean and Latin American media, as well as by JTA, and celebrated by LGBT NGOs such as the Argentinian Homosexual Community, or CHA.

Both brides told Argentinean media that they wanted the publicity in order to encourage other couples to hold religious wedding ceremonies.

Argentina was the first country in Latin America to approve same-sex marriages, which have been legal since July 2010.

The assembly of NCI last month unanimously approved a request to hold the same-sex wedding, calling it “another major step in the full recognition of all religious rights for all members of the community,” NCI Emanuel and the LGTB organization Judios Argentinos Gay (Jewish Argentinian Gays), or JAG, said in a statement, which said the wedding would be the first same-sex Jewish religious marriage in Argentina and Latin America. The decision was made under the guidelines of the 2006 Committee on Jewish Law and Standards of the Conservative movement’s Rabbinical Assembly, which approved same-sex marriages for the movement.

NCI-Emanu El belongs to both the Conservative and Reform movements. JAG and NCI Emanu El both are part of the Judaica Fundation network of Jewish institutions. JAG is also affiliated with the World Congress of Gay, Lesbian, Bisexual and Transgender Jews.