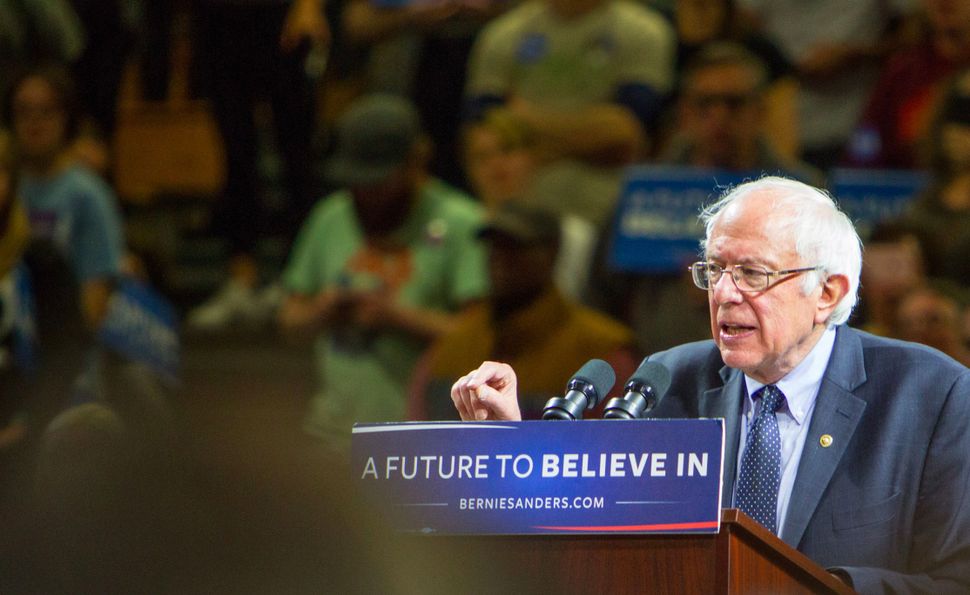 (JTA) — Phil Aroneanu is a second-generation American Jew whose parents came to America as immigrants seeking refuge from an oppressive Communist regime in Eastern Europe. Aroneanu himself was born in New York City and later moved to Vermont.

It’s a biography that to some extent mirrors that of Bernie Sanders. And it’s partly why Aroneanu, who now works as the Sanders campaign’s New York state director, decided to join the campaign.

“Bernie speaks to my Jewish values in a pretty significant way, especially with Pesach coming up,” Aroneanu, 32, told JTA in an interview. “We were once enslaved and now we’re free. We have an innate desire and now responsibility to free others from oppression, whether racial oppression, religious oppression, or refugees coming into this country or economic injustice. That’s what prompted me to jump on his campaign.”

Aroneanu is one of many Jews backing Sanders who say the candidate embodies their Jewish values. It’s not because Sanders is Jewish, they say; it’s because of the social justice values he champions.

“He embodies justice, integrity and hope,” said Iris Richman, a Conservative rabbi in New York who has established a grassroots group called Rabbis for Bernie that aims to help the Sanders presidential bid. “So many of his values are Jewish values. We were strangers in the land of Egypt. We were once at the bottom of society, and now we have a responsibility to the least privileged to make sure they’re able to strive and function.”

The fact that Sanders is also Jewish is a nice bonus, Richman told JTA.

“It’s a very positive thing given the history of Jews in America that there’s a Jewish candidate for president who has advanced to this point, and his Judaism doesn’t seem to be a negative in his campaign,” she noted.

Richman was among several speakers at a Sanders campaign event in Manhattan on Sunday organized by the grassroots group Jews for Bernie ahead of New York’s April 19 primary. Richman delivered a pro-Sanders d’var Torah.

“The Torah tells us 36 times — the most repeated and emphasized value in the Torah — that we must always remember that Jews were once strangers in Egypt and we must protect the stranger,” Richman said in her speech. “We need to hear that call of the afflicted and we need to respond. Which candidate do we know who, for his entire adult life, has been willing to take the lonely road as an outsider when necessary and consistently and always stand for the poor? Stand for free college? Stand for health care for all as a right and not a privilege? Stand against the war in Iraq?”

Susan Cohen, 60, a lifelong Orthodox Jew from Brooklyn, says she, too, sees Sanders as championing Jewish ethics – and her own political values.

“The Democratic principles I hold so dear are the same principles Bernie Sanders talks about: being a voice for the disenfranchised, the poor, the homeless, women, minorities, economic justice,” she told JTA in a telephone interview. “These are not just Jewish values but religious, Torah-based values, and having all of that I choose to support Bernie Sanders for president.”

A diehard Democrat, Cohen says she finds the shift among Orthodox Jews toward the Republican Party bewildering. She describes herself as a strong supporter of Israel and notes that her parents, two siblings and other relatives have immigrated to Israel. Cohen says she’s sure that Sanders, if elected president, will do right by the Jewish state — though she allows that she wishes he were going to Israel this week instead of to a Vatican conference in Rome.

“If Bernie gets the nomination, he’s going to approach Israel with the same careful consideration he applies to other things: learning the real issues, actually visiting Israel to see what it’s like for Israel to live next door to enemies pledging to wipe Israel off the face of the earth,” Cohen told JTA. “He’s going to do the right thing, which is to continue to support Israel militarily, financially, morally. I don’t think that Bernie Sanders in any way shape or form is going to betray us.”

Sanders himself rarely expresses his politics in terms of “Jewish values” — when NPR asked him last year about what being a Jew meant to him, Sanders spoke of his relatives lost in the Holocaust and his subsequent efforts to combat “horrific racism or anti-Semitism.” But others see him as an exemplar of a particular type of Jewish leftist. Rabbi and columnist Jay Michaelson, writing in the Daily Beast, described the model as the “basically secular, basically atheist Jewish Democratic Socialist, part of the erstwhile 20th-century American Jewish Left.”

Whether or not Sanders wins in New York, where Jewish voters carry more sway than in any other state, Aroneanu says his time as a campaign staffer will be well spent. (As the campaign’s state director, he will be out of a job after April 19.)

He says his own experience as a child of immigrants underscores the urgency of the Sanders candidacy. Aroneanu’s mother came to the United States in 1980 as a political asylum seeker fleeing the Communist Ceaușescu regime in Romania. His father came over as a non-refugee immigrant from Romania several years earlier. The two worked hard to make it in America, and Aroneanu, who was born in Manhattan in 1983, was raised largely by his grandparents in their Bergen County, New Jersey, home.

Aroneanu says he wants to make sure the American dream remains attainable for people like his parents.

“I’m not a very religious Jew, but I feel deeply connected to my roots as a Jew, as an immigrant, as a child of immigrants, as someone with a lot of history in Europe both with World War II and communism,” he said. “So does Bernie.”

Besides, Aroneanu says, he believes Sanders has a shot at beating Hillary Clinton.

“We’re definitely contesting New York. We’ve got a great operation here and the volunteer energy is incredible,” he said. “It’s diverse, it’s energetic and I think we can build on it.”