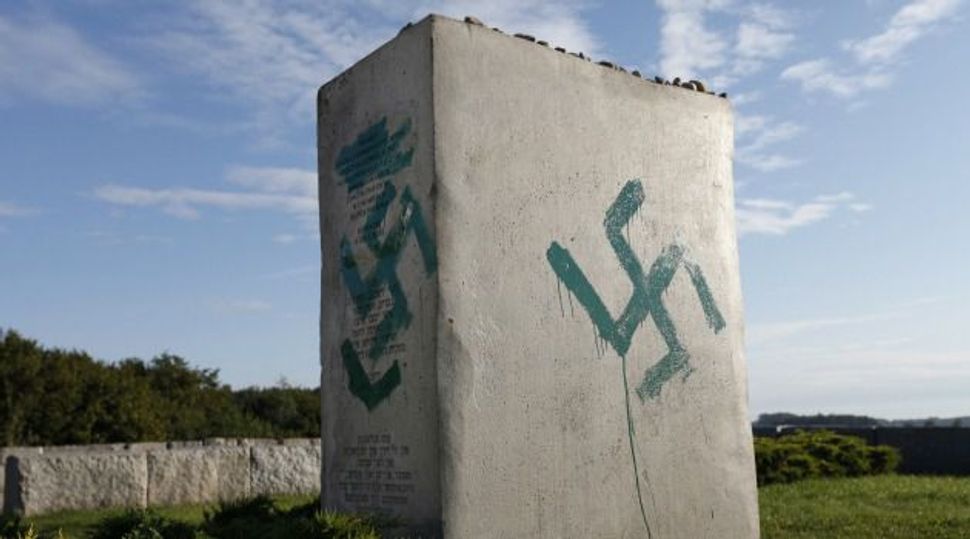 Shameful: Vandals desecrate the memorial to Jews killed by Polish neighbors in the town of Jedwabne as the Holocaust gathered pace in 1941. Image by getty images

Prosecutors are trying to determine whether Gross insulted the Polish nation by publishing an article in German newspaper “Die Welt” in which he said that Poles “had killed more Jews than the Germans” during World War II.

Gross, who is a Jewish Polish-born history professor based at Princeton University, was questioned for five hours Tuesday in the district attorney’s office in Katowice as a witness. His article was published by “Die Welt” in September 2015 and concerned the refugee issue and the lack of consent to their absorption by Poland.

The prosecutor’s office received almost 200 notifications of the accusation of a suspicion of committing the offense of insulting the Polish nation. It is punishable by to three years in prison.

The professor has not been charged with a crime.

“I said straight out that I was not going to offend the Polish nation,” Gross told the Associated Press. “I tried to make people aware of the problem of refugees in Europe. I’m just telling the truth, and the truth sometimes has the effect of shock on people who previously were not aware of the case.”

In February, the office of Polish President Andrzej Duda confirmed that it would consider revoking a national honor bestowed on Gross in 1996. Gross received the medal for his activities in opposition to Poland’s communism and for his historical works on Poles deported to Siberia.

Gross is the author of the controversial 2001 book “Neighbors,” about a 1941 pogrom perpetrated against Jews by their non-Jewish countrymen in the town of Jedwabne.