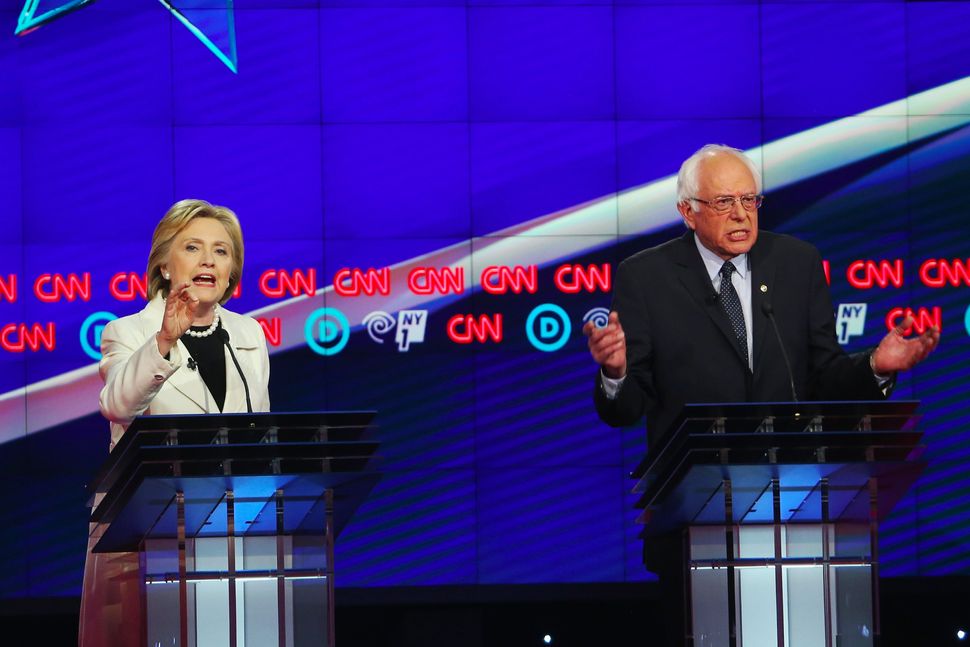 Hillary Clinton and Bernie Sanders during the the Democratic presidential debate in New York on April 14, 2016. Image by Getty Images

WASHINGTON — Bernie Sanders accused Hillary Clinton of neglecting the Palestinians, and Clinton said her rival was more prone to criticizing than solving problems when it comes to the Israeli-Palestinian conflict.

The Independent senator from Vermont and the former secretary of state had a lengthy and heated exchange on Israel and the Palestinians during their debate in Brooklyn Tuesday evening, just days ahead of the New York state primary.

“You gave a major speech to AIPAC, which obviously deals with the Middle East crisis and you barely mentioned the Palestinians,” he said during the debate broadcast by CNN.

“In the long run, if we are ever going to bring peace to that region, we are going to have to treat the Palestinian people with respect and dignity,” he said. “There comes a time when we pursue justice and peace that we will have to say Netanyahu is not right all the time.”

Sanders’ campaign simultaneously released an email quoting journalist Jeffrey Goldberg as saying that Clinton as secretary of state during President Barack Obama’s first term “stayed away” from the Israeli-Palestinian conflict.

Sanders stood by claims he has made in recent weeks that Israel’s actions during the 2014 war with Hamas in the Gaza Strip were “disproportionate.”

“If you’re asking me, and not just me but countries across the world, was that a disproportionate response. Yes,” Sanders said.

“I don’t know how you run a country when you are under constant threat,” she said, but added that she worked hard when she was secretary of state to bring about peace talks. “It does not mean that we do not continue to do everything we can to reach a two state solution.”

She depicted Sanders as a dilettante. “Describing the problem is a lot easier than trying to solve it,” she said.

“I can tell you right now I have been there with Israeli officials going back more than 25 years that they do not seek this kind of attacks,” she said. “They do not invite the rockets raining down on their towns and villages.”

Sanders, the first American Jew to win nominating contests for a major party, said he remained “100 percent” pro-Israel and noted, as he has in the past, that he spent months on a kibbutz in the 1960s.