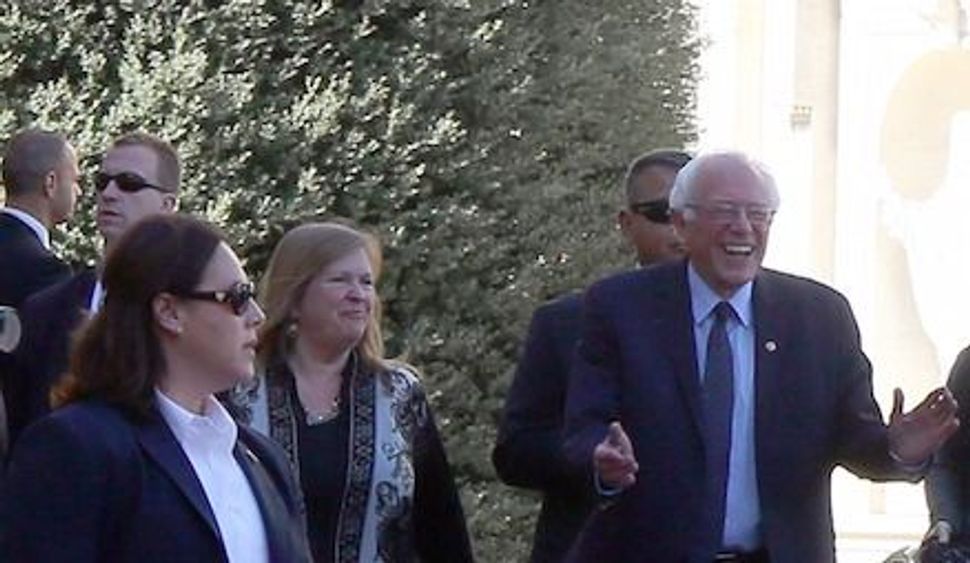 Pope Francis said on Saturday that his meeting with Bernie Sanders, contesting the Democratic candidacy for the U.S. Presidency, was not meddling in politics and that anyone who thought otherwise should “look for a psychiatrist.”

Sanders and the pope met briefly on Saturday morning at the Vatican guest house where Francis lives and where Sanders and his wife spent the night after he addressed a Vatican conference on social justice.

“When I came down, I greeted him, I shook his hand and nothing more. This is called good manners and it is not getting involved in politics,” the pope told reporters in answer to a question aboard the plane returning from the Greek island of Lesbos, where he visited a refugee camp..

“If anyone thinks that greeting someone is getting involved in politics, I recommend that he look for a psychiatrist,” he said, laughing.

In an interview with ABC News after the meeting, Sanders called the pope “a beautiful man,” adding “I am not a Catholic, but there is a radiance that comes from him.”

“I just conveyed to him my admiration for the extraordinary work he is doing raising some of the most important issues facing our planet and the billions of people on the planet and injecting the need for morality in the global economy,” Sanders, a Brooklyn-born son of Polish Jewish immigrants, told ABC.

The Democratic hopeful from Vermont has campaigned on a promise to rein in corporate power and level the economic playing field for working and lower-income Americans who he says have been left behind, a message echoing that of the pope.

The meeting came just days before Tuesday’s Democratic party primary in New York, where polls say he is trailing Hillary Clinton. After he won seven of the last eight state contests, a loss in Sanders’ home state would give front-runner Clinton a boost toward the party’s presidential nomination.

Sanders has said the trip was not a pitch for the Catholic vote but a testament to his admiration for the pontiff.—Reuters