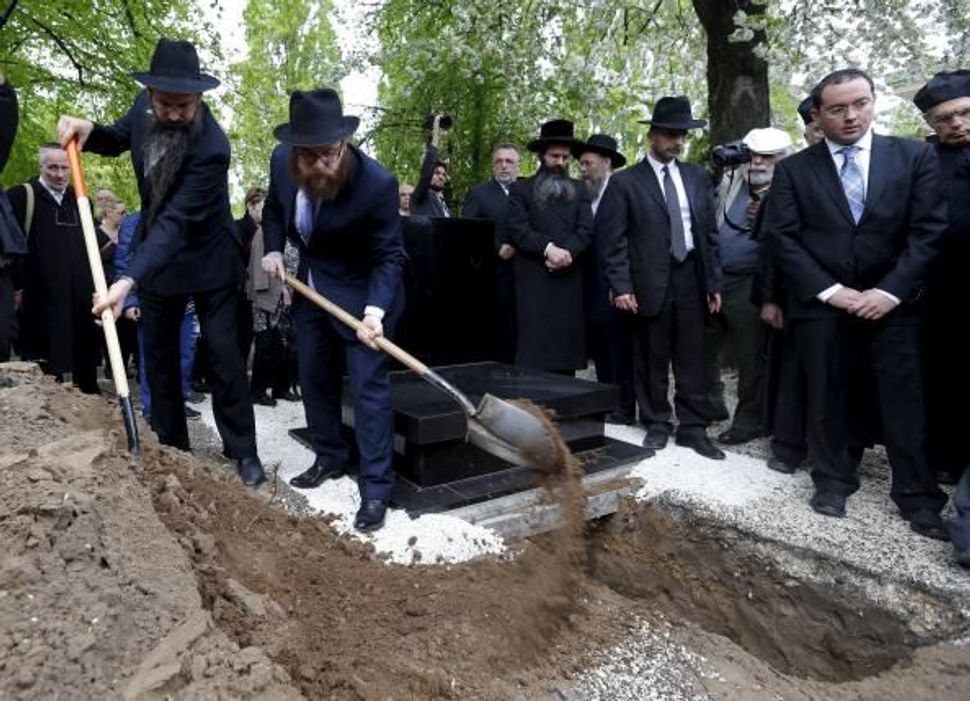 Jews bury the remains of Holocaust victims in the Jewish cemetery in Budapest, Hungary April 15, 2016. Image by Reuters

Budapest (Reuters)- Miklos Heisler was 17 when the Arrow Cross Party took power in Hungary in the final years of World War Two and began a short reign of terror in which thousands of Jews, previously spared from deportation, were killed in Budapest.

But Heisler was young and careless, and Arrow Cross paramilitary members caught him twice. The first time around, he was spared by an intervention from Raoul Wallenberg, a Swedish diplomat who saved scores of Jews.

The second time, he and two friends were herded to the banks of the Danube, and like thousands of other Jews during those months, were shot in the head and left to die there.

Heisler’s nephew Andras is now chairman of the Federation of Jewish Communities in Hungary (Mazsihisz). He recounted that story this week ahead of the burial on Friday of dozens of people whose remains were found in 2011 under a Budapest bridge.

The fate of the remains, which are almost certainly those of wartime Jews, illustrates the difficulty Hungarians still have in facing that past, including the fact that the descendants of victims and perpetrators still live together in Budapest.

“We try to do the burial so it sends a message to society,” Heisler said. “When these bones were found nobody could be sure they were all Jewish; probably some are not… If remains of Jews and Goyim (non-Jews) are found together they must be put to rest together.”

Hungary’s government, then and now dominated by the populist center-right Fidesz party, has been criticized for paying lip service to combating anti-Semitism but white-washing the past when political interests dictated so.

“The loss of those people, ejected from the nation, robbed and bestially murdered, is our shared loss,” Balog said. “A long road leads to honorable remembrance. Let us thank everyone who did not stop or turn back on that road.”

Such rhetoric does little to allay the fears of many Jews of anti-Semitism. They point to attempts to erect statues of wartime anti-Semites.

“The (government’s) rhetoric is good; the statues are mistakes,” Heisler told Reuters earlier this week. But Hungary is “passing the test today”, he said at the graveside on Friday.

The central European nation still grapples with its past, including its active role in deporting half a million Jews.

The remains were unearthed five years ago by construction teams renovating a Budapest bridge. Clothing placed them in the 1940s, and bullet marks and a subsequent DNA analysis established that they were almost certainly Jews.

It was no real surprise. In the final months of the war, Hungarian fascists executed thousands of Jews on the riverbank. Lined up in groups of 20 to 30, they were shot and forced into the icy waters.

Miklos Heisler was lucky. One bullet bounced off his skull and another pierced his neck but left all vital tissue unharmed. He fainted. His two friends were shot and killed. Their bodies covered him. When he came to, he crawled to a safe house.

“To this day his head bears the mark,” Andras Heisler said. “He … lives in good health in Israel.”

When the remains were found they were examined by experts but were not given the thorough DNA treatment that could have established their ancestry.

After that there was nearly total silence, which surprised some outside observers.

“The problem in Hungary, I realized, wasn’t just the rise of anti-Semitic, neo-fascist voices and acts,” former U.S. Ambassador Eleni Tsakopoulos Kounalakis wrote in her 2013 book about her time in Hungary.

“Hungarian society at large was responding to those radical voices with disproportionate silence and apathy. In the case of the skeletons under the bridge, it seemed that most people preferred to keep old memories submerged in the cold waters of the Danube.”

To Vera Varsa Szekeres, a survivor of the Arrow Cross terror, anti-Semitic voices are a warning sign.

“We were marked,” she told Reuters by the Danube, holding the yellow star her mother once sewed on her coat. “I must be reminded of what happened until I breathe my last. As does my family … this star is their heritage too.”

“We must process this, face it and counter it … We resist at the first strange word.”