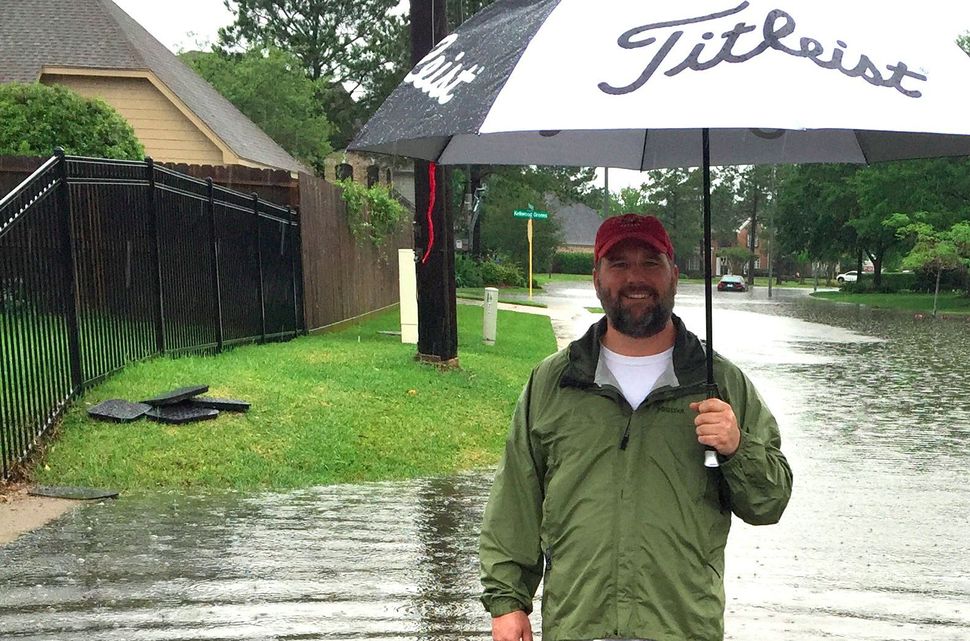 Massive flooding has caused serious damage to the Jewish community of Houston for the second time in less than a year and just days before Passover.

Dozens of homes in the Jewish neighborhoods of Meyerland and Willow Meadows reported significant flood damage as of Tuesday morning from the extremely heavy rainfall in the previous two days, the Jewish Herald Voice reported.

The United Orthodox Synagogue reported about 3 feet of water in its sanctuary after sustaining more than $1 million in damages from the flooding that hit last may on Memorial Day. The Meyerland Minyan also took on water, according to the newspaper.

Flash floods resulted from the 16 inches of rain that hit the Houston area by Monday morning. At least seven people are dead and at least 1,000 homes flooded, with more rain expected on Wednesday. Damage so far is estimated at $5 billion.

Houston is America’s fourth-largest city and home to more than 40,000 Jews.

The Evelyn Rubenstein JCC, Jewish Family Service and Seven Acres, in coordination with the Jewish Federation of Greater Houston, on Tuesday was assessing needs and preparing recovery plans.

On Tuesday, case managers from the Jewish Family Service began contacting the 393 individuals in its database who were impacted by the flooding nearly a year ago to see if they needed help.

The Memorial Day flooding damaged about 500 Jewish homes — among the more than 2,500 damaged homes — as well as three synagogues and 11 other Houston Jewish institutions, which were in the midst of an 18-month recovery plan when the new flooding hit.

“As we’ve done before, this community is going to pull together like no other community in the country. Look forward to a strong rebuild,” Rick Guttman, president of the United Orthodox Synagogue, told the Herald Voice.

The Jewish Family Service was working to find spots for displaced families at communal Passover seders and called on Jewish families not affected by the flooding to invite families for seders.

“It’s another emotional and financial hit, but we’re here for each other,” Judy Yambras, whose home was damaged for the second time in less than a year, told the Herald Voice.

Meanwhile, dozens of students from Robert M. Beren Academy Jewish day school formed volunteer crews to help families affected by the floods and to help take care of the damaged synagogues, according to the newspaper.