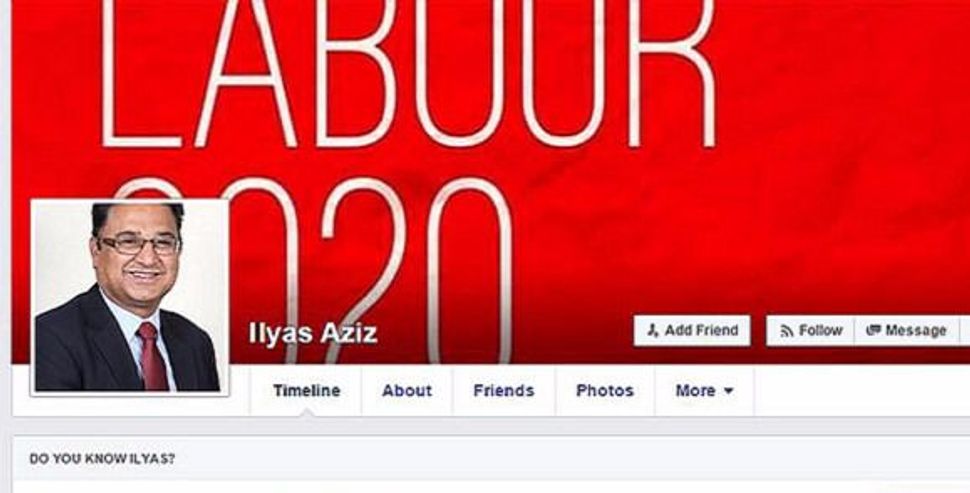 — Britain’s Labour Party suspended a local city councilman after a British political watchdog website produced Facebook posts in which he said that Israel should have been created in the United States and that it is not too late to move Israeli Jews there.

Ilyas Aziz, a city councilman for Nottingham in north-central England, was suspended on Monday, hours after the Guido Fawkes website posted screenshots of his Facebook posts, including the 2014 one calling for the relocation of Israeli Jews.

Other posts shown on Guido Fawkes included one comparing Israel’s treatment of the Palestinians to the Nazi’s treatment of Jews and another perpetuating the blood libel myth that reads “Stop drinking Gaza’s blood.” Another post shows an Israeli flag with the words “God didn’t give you the land – the UK did … Illegally” superimposed on it.

The suspension comes days after Labour suspended British Member of Parliament Naz Shah for a 2014 Facebook post calling for relocating the entire State of Israel to the United States.

On Thursday, the party suspended former London Mayor Ken Livingstone for saying that Adolf Hitler was a Zionist for advocating in 1932 a policy of moving Europe’s Jews to Israel.

The following day, the party said it would launch an investigation into anti-Semitism in the party. Labour Party leader Jeremy Corbyn also said in a statement that he would propose a new party code of conduct, which would “make explicitly clear for the first time that Labour will not tolerate any form of racism, including anti-Semitism, in the party.”

The latest suspension comes days before local elections, including for mayor of London, in a race that Labour’s candidate, Sadiq Kahn, is favored to win, which would make him the first Muslim mayor of a major Western city. He is running against Conservative Party candidate Zac Goldsmith.