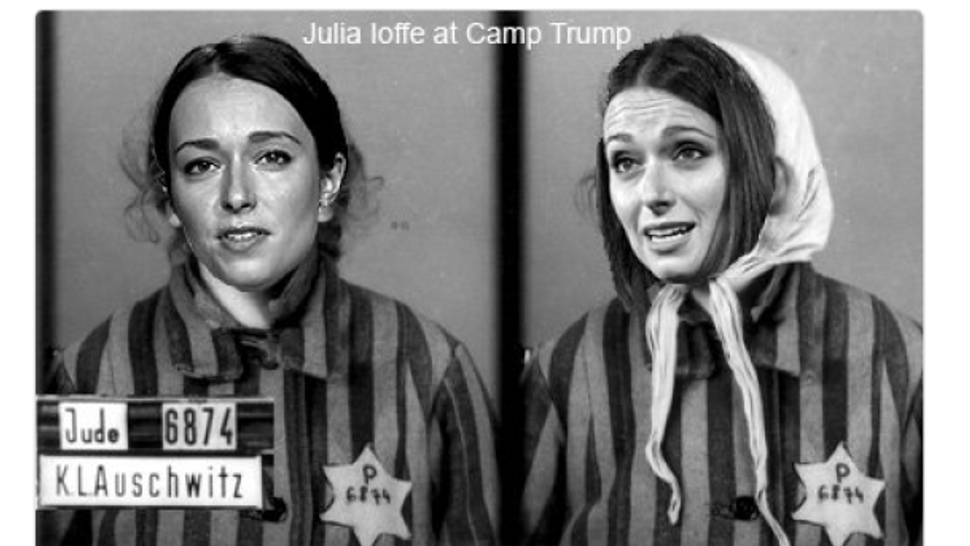 A screenshot from journalist Julia Ioffe’s Twitter, showing a anti-Semitic photo she received after writing a profile of Donald Trump’s wife Melania. Image by Twitter

A journalist who was flooded last month with anti-Semitic death threats from Donald Trump supporters after writing a profile of the candidate’s wife has filed a police report over the harassment.

Julia Ioffe, who is Jewish, filed a report on April 29 with Washington D.C. police claiming she was under threat of injury or kidnapping after she received a caricature image of a person being being shot in the back and “other harassing calls and disturbing emails depicting violent scenarios,” the Washington Post reported.

Following the publication of the article, which some saw as portraying Melania Trump in an unflattering light, Ioffe vented on Twitter about receiving anonymous phone calls playing Hitler speeches, and images showing a stereotypical cartoon of a Jew being shot.

Some of the messages were more personal: her face superimposed onto an Auschwitz mugshot and a photo of her wearing a World War II- era yellow star.

In addition to filing a police report, Ioffe has enlisted the help of the anti-Defamation League.

“I can confirm that we are working with her, and we are doing some research into the individuals involved, but we do not have much else to say at this point,” said Todd Gutnick, vice president of communications for the anti-Semitism watchdog, according to the Washington Post.

The profile of Melania, which was published in GQ, included information about the Slovenian model’s family, such as the fact that she has an estranged half-brother.

Melania criticized the article, saying it contained “numerous inaccuracies” and that Ioffe “had an agenda when going after my family.” Ioffe denied the profile contained any untrue information.

Trump has gained endorsements of overtly anti-Semitic groups and figures, including former Ku Klux Klan leader David Duke, who said last week that Jewish opposition to Trump shows that Jews are “the real problem” and the “reason why America is not great.”

The presumptive Republican nominee later disavowed Duke, saying there was no place for anti-Semitism in “our society, which needs to be united, not divided.”

However, a day earlier, when asked by Wolf Blitzer whether he had anything to say to those supporters who had harassed Ioffe, Trump did not denounce the supporters.

“I don’t have a message to the fans, a woman wrote an article that was inaccurate,” he said, adding that he had not read the profile but had heard it was “nasty.”

Ioffe declined a request for comments by the Forward.

Josefin Dolsten can be contacted at dolsten@forward.com, and followed on Twitter @JosefinDolsten.