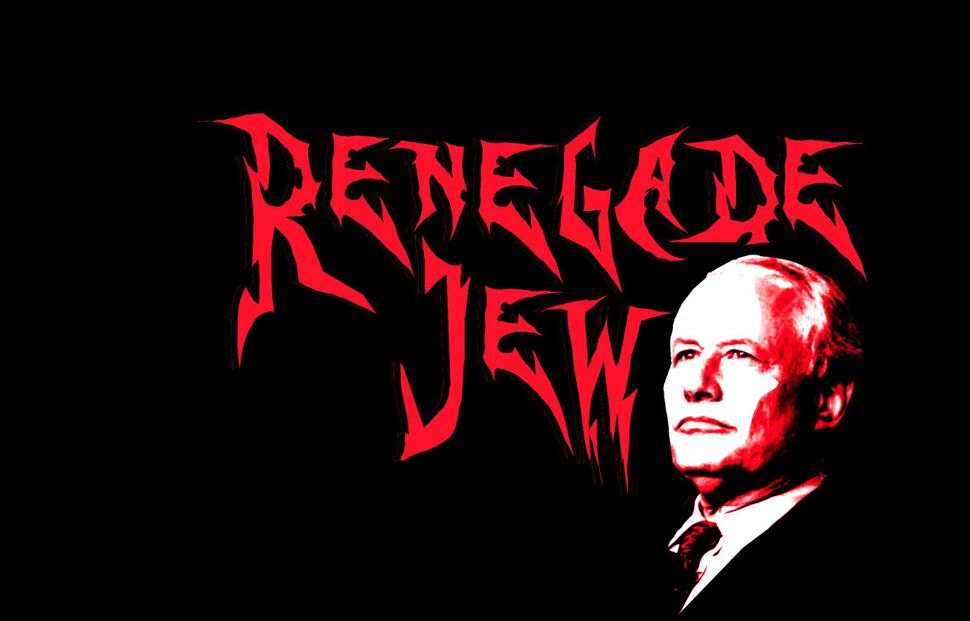 A Breitbart contributor stood by his use of the term “renegade Jew” in an attack on Brill Kristol for his opposition to Donald Trump, after Jewish groups and political commentators slammed the use of the term as anti-Semitic.

David Horowitz said the remark referred to Kristol splitting the Republican party and betraying Jewish interests in his push for a conservative third-party alternative to Trump.

“Splitting the Republican vote and electing Hillary is a betrayal of the Jews in an hour in which their backs are to the wall. Hence the designation renegade for those who are planning a third-party run, and for which I make no apologies,” Horowitz wrote on Breitbart Monday.

Horowitz’s initial article created a firestorm on social media Sunday evening, quickly amassing over 15,000 tweets, with some users calling the term anti-Semitic, and others finding humorous alternate uses for it.

Slate columnist Michelle Goldberg wrote Monday that the original article, taken together with Trump’s history of white supremacist supporters, “suggests that the Jew baiting popular on pro-Trump social media feeds is creeping toward the mainstream.”

The American Jewish Committee criticized the article as anti-Semitic, while the Anti-Defamation League said Horowitz had been wrong to bring religion into a political discussion.

The claim in @BreitbartNews that @BillKristol is a “renegade Jew” smacks of anti-Semitism.

.@BreitbartNews wrong to label Bill Kristol a ‘Renegade Jew’ https://t.co/hNonUAC98D. What does religion have to do w/ his political views?

Others, such as Guardian reporter Ben Jacobs, expressed their distaste for the term by mocking it.

Some jokingly wrote that it sounded like a superhero name, called it “a great name for a Hasidic metal band,” and pointed out that prominent historical Jews (including Baruch Spinoza and Jesus) had been called similar nicknames.

The Hebrew Hammer creators @Jon_Kesselman and @TheAdamGoldberg should totally weigh in on this “renegade Jew” morass pic.twitter.com/ZVdzFHERMs

“Renegade Jew” was also the monicker of a 1994 rapper from Crown Heights, who is now nearly impossible to Google.https://t.co/SChXTmENT8

Some remarked that the nickname might have been applied to the world’s most famous Jew.

In fairness to that Breitbart headline, Jesus was also a Renegade Jew

[extremely youth pastor voice] “You know who else was a renegade Jew?”

Renegade Jew should not be a Breitbart slur, but the title of a Spinoza biography.

In fact a book about the Jewish apikoros philosopher published in 2009 actually refers to him as a “renegade Jew.”

Some thought the name would be perfect for a Jewish metal or punk band.

‘Renegade Jew’ is a great name for a Hasidic metal band https://t.co/OcMLimggJ2

anyway, “Renegade Jew” is a terrible insult. any time yr anti-semitic insult sounds like a good name for a klezmer-punk band, you’ve failed

I was more into Renegade Jew’s early work.