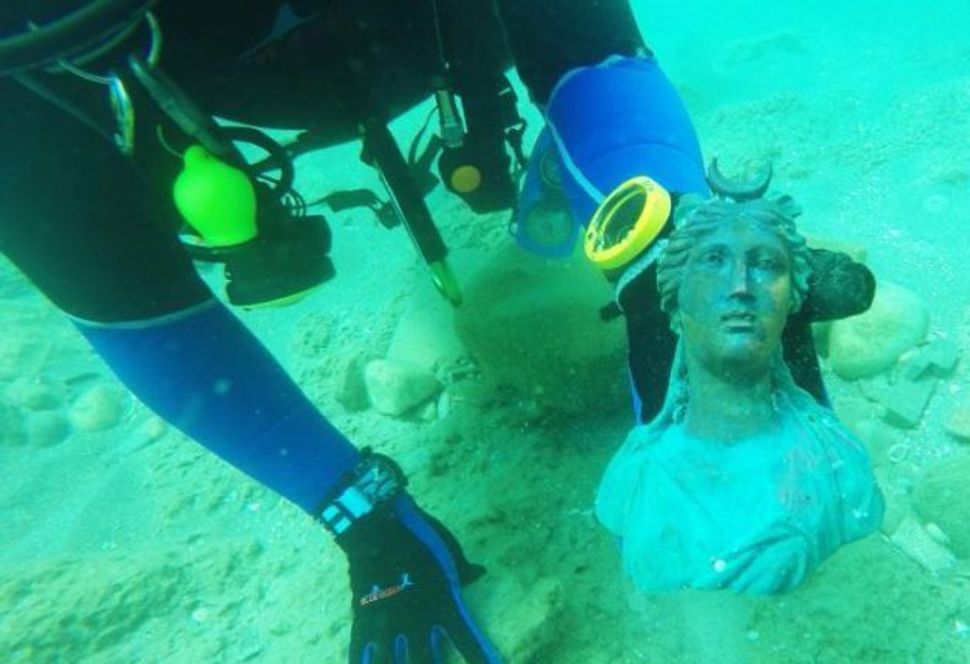 Archaeologists in Israel have recovered bronze statues and thousands of coins from a merchant ship that sank off the Mediterranean coast some 1,600 years ago during the late Roman period.

The Israel Antiquities Authority (IAA) said two divers had made the discovery several weeks ago in the ancient harbor of Caesarea in the eastern Mediterranean.

Successive dives recovered a haul including a bronze lamp depicting the image of sun god Sol, a figure of moon goddess Luna, fragments of life-size bronze cast statues as well as two lumps of thousands of coins.

The IAA said the remains of a ship were “left uncovered on the sea bottom” and included iron anchors and fragments of jars used for drinking water by the crew. The haul’s location and distribution suggested the “large merchant ship was carrying a cargo of metal slated (for) recycling.”

“A marine assemblage such as this has not been found in Israel in the past 30 years,” Jacob Sharvit and Dror Planer of the IAA’s Marine Archaeology Unit said in a statement.

“Metal statues are rare archaeological finds because they were always melted down and recycled in antiquity.”

The IAA said the vessel had probably hit a storm as it entered the harbor and had drifted before hitting rocks and the seawall.

The IAA said the range of items reflected a “period of economic and commercial stability” in the late Roman Empire. It said past marine excavations in Caesarea had uncovered a small number of bronze statues but this haul was much bigger and the sand-protected statues were in “an amazing state” of preservation.

Last year divers found a haul of 1,000-year-old gold coins inscribed in Arabic on the sea bed off Israel.