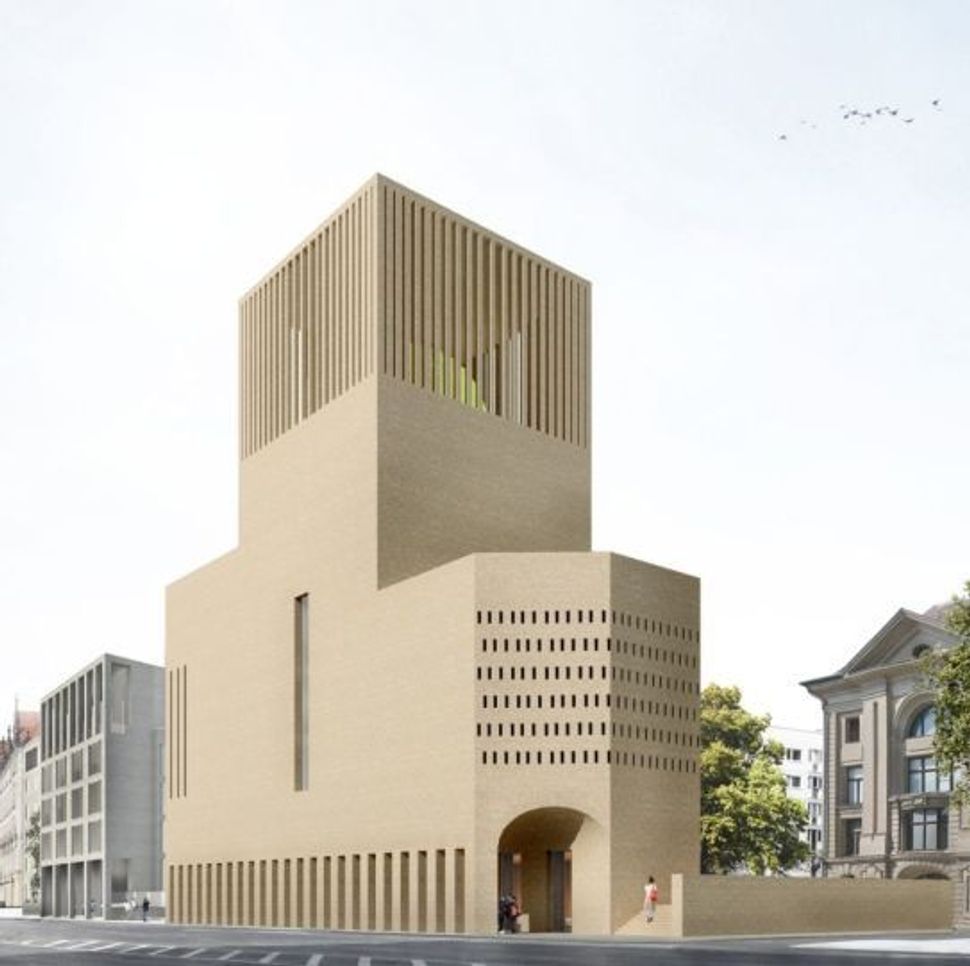 The House of One will cover about 640 square meters (simulation). Image by Davide Abbonacci/ Haaretz

A decade ago, the idea of building a unique religious structure that would combine prayer halls for the three main monotheistic religions was first proposed during archaeological excavations of a plot on the southern end of the Fischerinsel (Fisher Island) in the Mitte neighborhood of Berlin. In 2012, an international architectural competition was held to plan the building, combining a synagogue, church and mosque. The Berlin architectural firm of Kuehn Malvezzi was selected.

The building, named the “House of One,” will not be large, only 670 square meters, and construction is scheduled to start in 2017. This will be the first structure of its kind combining separate prayer halls for the three religions.

Even though the number of Jews in Berlin is tiny compared to the number of Muslims and Christians, each religion is being allocated a prayer hall of similar size – but different in design. The synagogue is in a hexagonal shape, for example.

The building’s central communal hall will be jointly shared, 32 meters high and designed to hold all the worshippers together. The building will be covered in brick and the exterior will feature no religious elements.

Inter-faith prayer halls already exist, in airports for example, but the House of One is unique in that it includes separate spaces for each religion, connected by a common space. 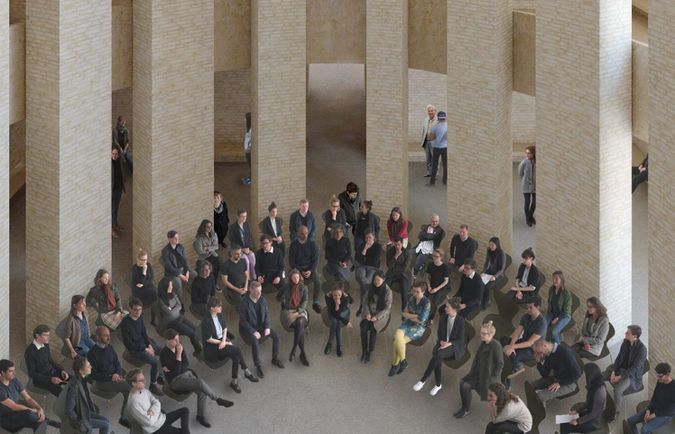 The envisaged interior of the House of One. Image by Kuehn Malvezzi/ Haaretz

The project is being funded by donations through its website, and a 10-euro contribution pays for one brick. So far over 1 million euros have been raised.

Rabbi Tovia Ben Chorin, one of the leaders of the project, says it is a challenge not only for the people of Berlin but for anyone who is interested in interreligious dialogue. As to why it is being built in Berlin, he says on the project’s website: “For me as a Jew, this city is the ‘City of Wounds’ and the ‘City of Miracles.’ In this place our systematic extermination was planned. And it is from this city that an answer has emerged … because it is a multicultural city, the idea will spread to different countries all over the world.”

The project is “a sign, a signal to the world that the great majority of Muslims are peaceful and not violent,” Imam Kadir Sanci, the Muslim religious leader of the project, told the BBC. It is also a place where different cultures can learn from each other, he says.

Architect Wilfried Kuehn, a partner in Kuehn Malvezzi, told Haaretz that “the research process for the House of One is multidisciplinary and ongoing.”

The first stage was to study the site and its long history. The project is being built on the site of the remnants of Berlin’s earliest church, the Petrikirche (St. Peter’s Church). The basement of the structure will display some of the archaeological finds from the site. One of the walls will be built on the foundation of what was one of the walls of the neo-Gothic church built there in 1853. The second stage of the research included studying the design of synagogues, mosques and churches. 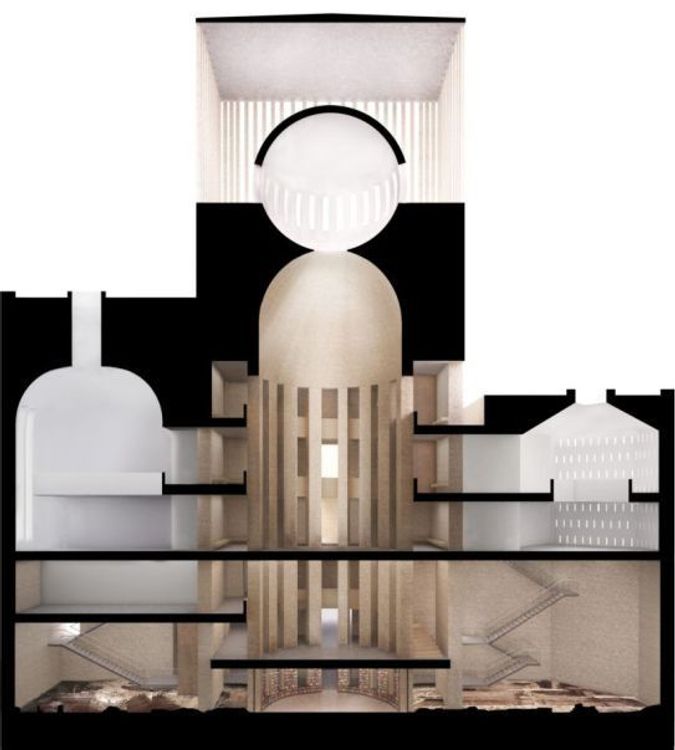 “We have been also interested in sacred spaces which in one way or another underwent transformations to serve a different cult, such as Hagia Sophia in Istanbul or the Mezquita-Cattedral de Cordoba,” said Kuehn. The Hagia Sophia was originally a church and turned into a mosque, while the cathedral in Cordoba underwent the opposite conversion.

Seminars and talks with religious leaders, philosophers, curators and artists are an essential part of the entire planning process.

The dichotomy between the exterior and interior is intentional. “Each faith has their own sacred space as a dedicated house of prayer, while all three are located on the same level around a shared central space that other than for mingling serves as a house of learning. The building thus expresses the relationship between the three religions, which can be described as a simultaneity of intimacy and foreignness in a spatial constellation. In a way, the central domed space acts much like an urban square,” says Kuehn.

The architects chose not to use minarets or bell towers, because “communicating the inside of the House of One to the outside by way of a minaret or campanile would not tell the story right,” he says.

“To us, it is important that the House of One appears in the city as a unity that does not conform to its immediate surroundings. People will realize that it is something new and extraordinary without knowing exactly what it is.” 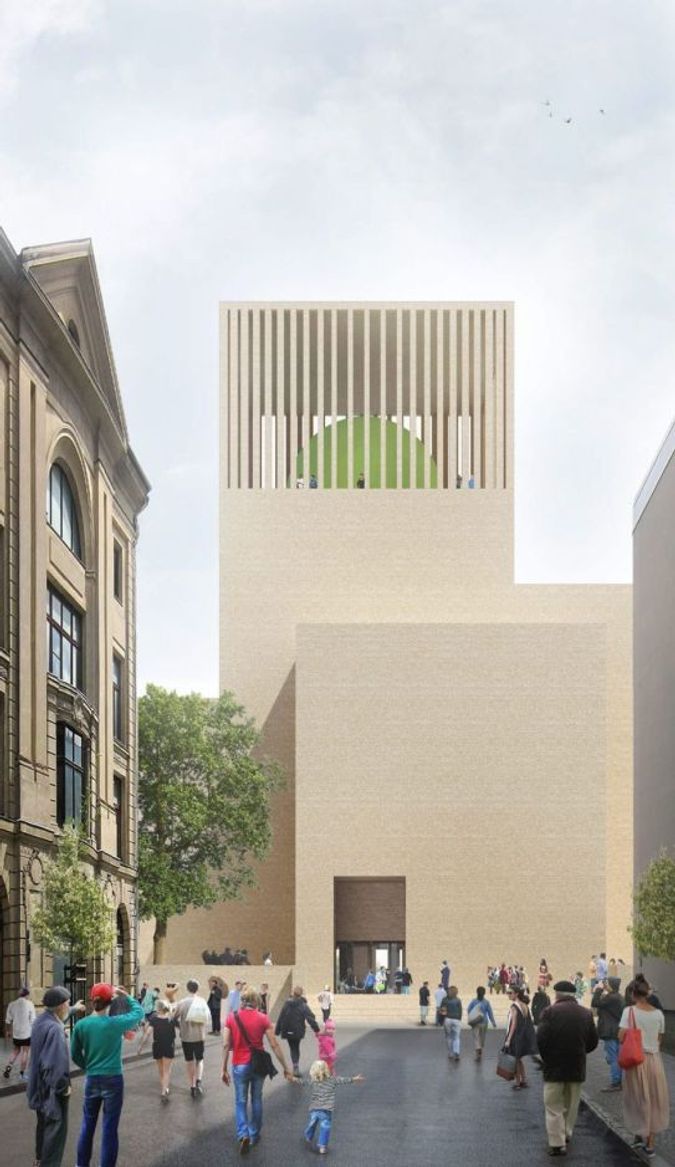 The House of One is envisaged as a magnet for people of all religions (simulation). Image by Davide Abbonacci/ Haaretz

What are the difficulties in planning such a project and in what way is it different than planning other public projects you have designed?

“Designing the House of One for us is a unique task as there is no typological model for it. It is a great challenge for architecture to not be just a container but actually aspire to be an intimate and significant expression of the content itself,” says Kuehn.

“In a strongly differentiated society like ours, the role of the architect tends to be the one of a specialist or, at worst, a provider of technical services. In this specific political and cultural project, we are called as generalists in a way we have rarely experienced before. And for exactly this reason I think it matches our approach to architecture. We conceive architecture as a cultural practice that reworks existing realities and is able to create new contexts for them.”

Who will the building serve? The communities have their own buildings. Won’t it just turn into a tourist attraction in the end?

“The House of One is conceived as a house of prayer and learning for Jews, Christians and Muslims alike, but even more so it addresses the city’s secular communities. We assume the House of One will primarily be a public place for religious practice as well as learning and debate, and not a touristic attraction. Berlin is an extremely secular city even by European standards, and while Jewish religious life resumed after World War II, since then a growing number of Muslims above all from Anatolia have come to Berlin and decided to stay.

“As a result, extremely diverse communities of all three Abrahamic religions live in Berlin today, but there is very little exchange among them, as there is very little public interface between religious practices and public life. Religion, faith or theology are topics that are only starting to play a new role in artistic production, in serious debates or exhibitions of major cultural institutions,” says Kuehn. 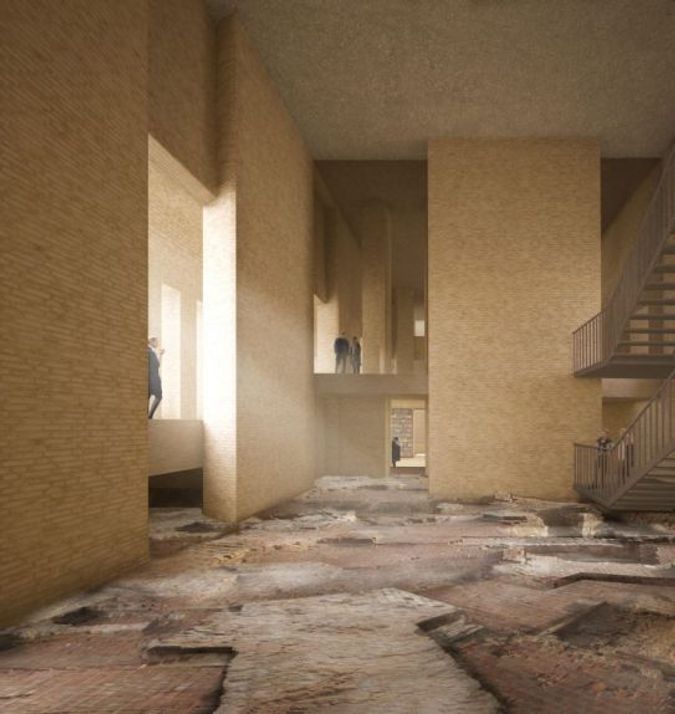 The House of One will be built on the ruins of a neo-Gothic church from 1853 (simulation). Image by Kuehn Malvezzi/ Haaretz

He says such a building could be built in Israel, too.

“In a way, Jerusalem, with its quarters dominated by the three different Abrahamic faiths and the close presence of their sacred places, epitomizes the concept of the House of One more than any other place in the world. So, namely there, it seems a building of this kind would have a place.”